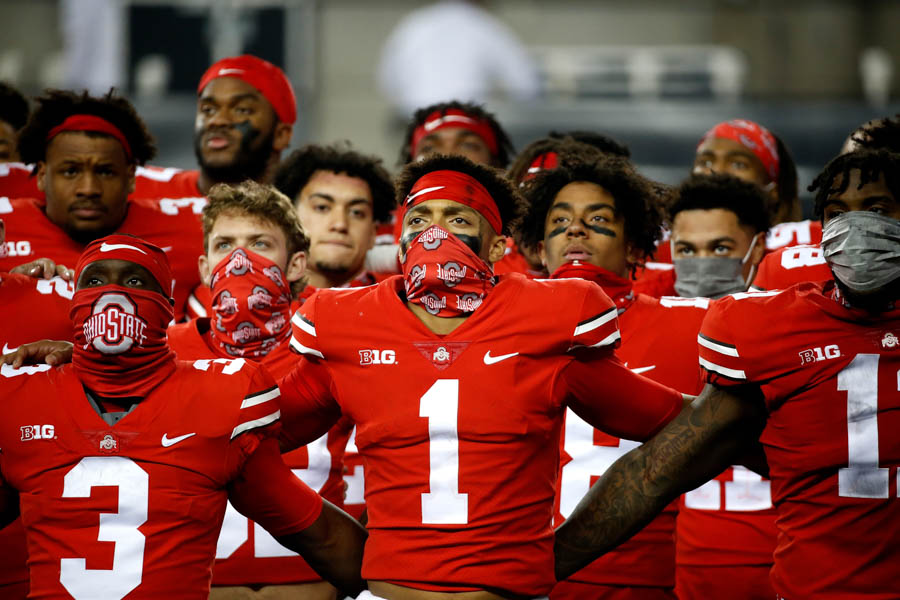 This Week in Sports Talk (TWIST) is our weekly roundup of top headlines and current events from the past seven days in the world of sports, plus a preview of what’s up next. Heading into the week of December 20, 2020, here’s how to talk about the top sports news of the moment. Skim it, and you’ll be good to go all week.

As Week 15 in the NFL unfolds, some teams are scrambling for a playoff spot. Others are playing for division titles and bragging rights. If you’re lucky, your team is in one of these two categories. If you’re not so lucky, you’re a fan of a team like ours, the New England Patriots (6-7), who seem to be playing for . . . the sheer torture of it? Currently, they have a 4% chance of making the playoffs. They’ve only missed the post-season twice since 2001. Ugh!!!!

In the AFC, the Super Bowl champion Kansas City Chiefs (12-1) have clinched their playoff berth. The Pittsburgh Steelers (11-2) have clinched a wild card slot (we’re a bit worried about them – they’re on a two-game losing streak after going to 11-0).

In the NFC, the Green Bay Packers (10-3) have clinched their division and the New Orleans Saints (10-3) have secured a wild card slot.

The regular season MVP talk is also heating up. After Chiefs quarterback Patrick Mahomes had three interceptions in last week’s game, Packers quarterback Aaron Rodgers seems to be in the lead. If he wins, it’ll be his third time. Our Sports Desk says don’t sleep on Derrick Henry, though. Even though the MVP title seems to go only to a quarterback, the running back has been carrying the Tennessee Titans for most of the season.

But before we report on last night, we note that rookie Justin Herbert of the Chargers (5-9) made news with an overtime win against the Raiders (7-7) on Thursday Night Football. Herbert set an NFL rookie record with his seventh 300-yard game. Also, his 27 passing touchdowns on the year are now tied with Baker Mayfield (2018) for the most by a rookie in NFL history.

Regular readers will remember Herbert as “the haircut guy.” His coach became his barber with unfortunate results a few weeks ago. Doesn’t seem to have stopped him from dazzling on the field.

On to the two NFL games last night. The Buffalo Bills (11-3) played the Denver Broncos (5-9), and Bills quarterback Josh Allen delivered, with a 48-19 win. The Bills clinched their first AFC East title in 25 years.

Also last night, the Green Bay Packers (11-3) played the Carolina Panthers (4-10). Aaron Rodgers led the Packers to a win, 24-16, their fourth straight. But fans are already fretting about their performance in the second half, where they struggled to hold onto their lead.

ESPN’s Adam Schefter reported that Drew Brees will be the Saints’ starting quarterback today when they host the Kansas City Chiefs. Brees returns after missing four games with broken ribs and a punctured lung. Normally this would be an epic game, but with Brees rusty and his #1 target Michael Thomas out with injured ankle, expectations are low. The Chiefs are expected to keep trying to get their red zone offense and defense back to a championship level before the playoffs.

New Orleans Saints quarterback Drew Brees will be back on the field for today’s game against the Kansas City Chiefs. Photo Credit: Getty Images.

The Tampa Bay Buccaneers (8-5) versus the Atlanta Falcons (4-9) match-up is an important one for Tampa Bay. The experts say the Bucs have a 94% chance of making the playoffs, after a 12-season drought. Vegas thinks they’ll get it done today.

If the New York Giants (5-8) can beat the Cleveland Browns (9-4), they could be back in playoff contention. That’s because the Washington Football Team (6-7) quarterback Alex Smith has been ruled out of today’s game against the Seattle Seahawks (9-4) with a strained right calf. Putting Washington’s four-game winning streak and their NFC East lead in jeopardy. It’ll be tougher for the Giants than expected, as their quarterback Daniel Jones is on the IR list and not playing in today’s game.

is this the week for a jets win?

And what about the New York Jets, you say? Well, the Vegas odds have the LA Rams (9-4) favored by 17 points over the Jets (0-13) in today’s game. Could they really lose by that much? Dear reader, it has happened before.

what’s up with the Pats?

And since you asked, here’s a note about our beloved and beleaguered team, the New England Patriots. Although, it’s not really a good one. Once upon a time, head coach Bill Belichick was known to have the best staff in the league, and his coordinators were always being hired as head coaches by other teams.

But don’t despair, fellow members of Patriots Nation. Head coach Mike Vrabel of the Tennessee Titans was a three-time Super Bowl champion when he was a linebacker. And Kliff Kingsbury, head coach of the Arizona Cardinals, was a member of the Pats Super Bowl XXXVIII winning team. So there’s that.

This was a huge weekend in college football, with the all the conference championships on the line. It started off on a bad note, when the Sun Belt Championship title game between No. 19 Louisiana and No. 12 Coastal Carolina was called off due to COVID-19 protocols. The Sun Belt named the two teams co-champions.

On Friday, unranked Oregon upset No. 13 USC, 31-24, to win the PAC12 Championship for the second straight year. But our Sports Desk notes that the Ducks played such a short season that despite the win, they still may not be invited into the playoffs.

On Saturday, No. 4 Ohio State won the Big 10 Championship, defeating No. 14 Northwestern 22-10. No. 10 Oklahoma beat No. 6 Iowa State, 27-21, to win their sixth straight Big 12 Championship. No. 3 Clemson handily dispatched No. 2 Notre Dame for the ACC Championship title. But The Fighting Irish may still be in contention for the playoffs for the BCS National Championship (which determines the national champion of the NCAA Division I Football Bowl Subdivision).

Finally, in the SEC Championship Game, No. 1 Alabama defeated No. 7 Florida, 52-46. Alabama running back Najee Harris set an SEC championship game record with five touchdowns, and a conference record for career touchdowns by a running back, with 53.

Bottom line? After all the drama, Alabama, Clemson and Ohio State are on top. Which is pretty much what everyone expected when the season began.

The long-overdue recognition will shine a light on 3,400 players. Including legends like Josh Gibson, one of the greatest players in the Negro Leagues. His official home run total is 238, but baseball scholars believe the real number is 643, which would put him in 7th place for the all-time MLB record.

The NBA season starts Tuesday, and as the season kicks off, the national champion LA Lakers and their star LeBron James look like the favorites to win it all again.

The Houston Rockets roster has collapsed, with Russell Westbrook already gone and James Harden is still looking for a trade. At this point, it’s most likely that will happen after the season starts. The strongest rumor remains that he’ll go to the Philadelphia 76’ers (if they will put Ben Simmons in the deal). A rumor that he might join the New York Knicks floated by this week, too.

7. Antetokounmpo is Staying with the Bucks

In the East, the NBA’s Giannis Antetokounmpo signed a five-year extension for $228.2 million with the Milwaukee Bucks, the team that drafted him in 2013.

Giannis Antetokounmpo of the Milwaukee Bucks during the 2019 NBA All-Star game. Photo by Streeter Lecka/Getty Images.

8. Lundqvist out for the upcoming NHL season

The NHL and NHL Players’ Association have reached a tentative agreement to play a 56-game regular season starting January 13, 2021.

This week came word that longtime New York Rangers goaltender Henrik Lundqvist will not play for the Washington Capitals next season due to a heart condition. This offseason, Lundqvist, 38, agreed to a one-year deal with the Capitals worth $1.5 million after a 15-year run with the Rangers.

Organizers have officially confirmed the schedule for the 2021 Australian Open. The tournament will begin on February 8 – about a month later than usual. Players will fly to Australia in chartered flights on January 15 and 16. Then they’ll quarantine inside a “bubble” upon arrival. Once they test negative, players will be free to live anywhere they want and move around Melbourne during a free week from February 1-7.

This move has scrambled the rest of the spring calendar, so watch this space for further updates. As of this posting, officials say the BNP Paribas Open in Indian Wells may be postponed, possibly to October. And the Miami Open could be moved to another country or rescheduled.

Two-time Olympic champion Mikaela Shiffrin finished first at the Audi FIS Alpine Ski World Cup Giant Slalom on Monday in Courchevel, France. It was her first win since the death of her father, Jeff, in February. Shiffrin’s 67th victory places her third on the list of total career wins.

That’s it. You’re good to go with the top sports headlines and coming attractions heading into the week of December 20, 2020. Stay safe and healthy, dear reader, and Happy Holidays. See you next week.