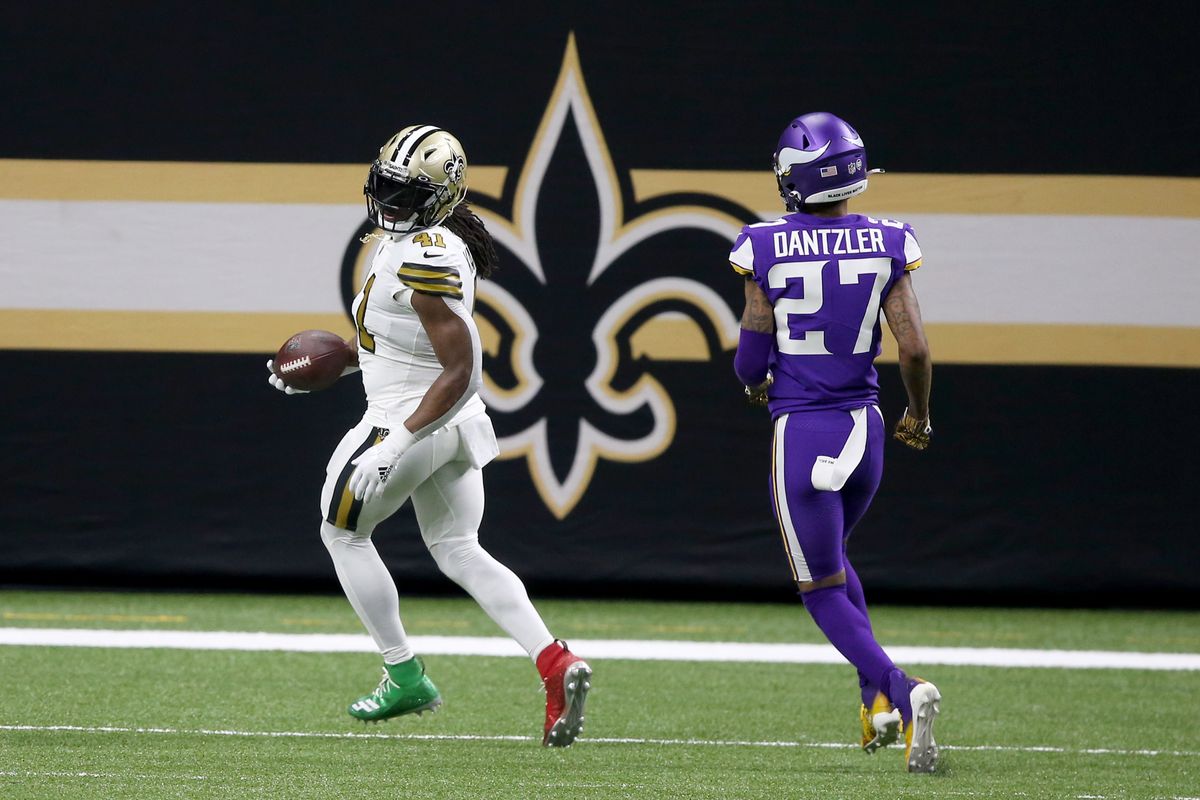 This Week in Sports Talk (TWIST) is our weekly roundup of top headlines and current events from the past seven days in the world of sports, plus a preview of what’s up next. Heading into the week of December 27, 2020, here’s how to talk about the top sports news of the moment. Skim it, and you’ll be good to go all week.

1. It’s a Kamara Christmas in the NFL

‘Tis the season for NFL games on Saturdays and Sundays, with strong teams competing for playoff berths and division titles and weak ones looking at their draft positions and hoping for better days next season. Here’s where we are after a busy couple of days in the kingdom of football.

Alvin Kamara was the NFL’s holiday hero on Christmas Day, rushing for six touchdowns in the New Orleans Saints’ 52-33 win over the Minnesota Vikings. That’s the most in an NFL game since Ernie Nevers did it in 1929.

This Week in Sports Talk December 27, 2020. The New Orleans Saints’ running back Alvin Kamara and his Christmas cleats win the day.

While accomplishing this heroic feat, Kamara wore a red cleat on his right foot and a green cleat on his left foot. ‘Cause it was Christmas Day, get it? The festive cleats are a violation of the NFL’s uniform policy, however, putting Kamara in jeopardy of being fined. If we were the NFL, we’d extend some holiday grace here. We’ll see if they go all Grinch on this one or not.

It was a good game for Saints quarterback Drew Brees, too. He became the first NFL quarterback to throw for 80,000 yards. This after recovering from a collapsed lung and a gazillion broken ribs earlier in the season. Dude!

With this loss, the Minnesota Vikings have been eliminated from the playoffs.

Steelers on a three-game losing streak

Backing up a bit for a Week 15 recap, after starting off the season 11-0, the Steelers lost their third straight game on Monday night, falling to the Bengals 27-17.

the jets finally win! but they also may have lost

The Jets entered the stadium last Sunday with an 0-13 record. Vegas had pegged them as 17-point underdogs against the LA Rams. But they pulled it together and achieved their first win of the season, 23-20.

You’d think there’d be some joy in Jets Nation, but you’d be wrong. Most fans were upset because the win might ultimately cost them a first-round draft pick and the ability to claim Trevor Lawrence as their own. The Jacksonville Jaguars (1-13) will get the first draft pick if they lose to the Chicago Bears (7-7) today.

Today, the Jets (1-13) host the Cleveland Browns (10-4), and the Browns are favored by 9.5 points. Our Sports Desk reports that the rumor is that head coach Adam Gase will be fired if the Jets lose this one. That’s what it will take for him to get fired?

Bucs headed to the playoffs

Yesterday, the Tampa Bay Buccaneers (10-5) took on the Detroit Lions (5-10) for a playoff slot.  This followed a near-disastrous game last Sunday, when Bucs quarterback Tom Brady erased a huge first-half deficit against Atlanta and mounted a second-half comeback to beat the Falcons 31-27.

The Tampa Bay Buccaneers clinch a playoff slot with a win over the Detroit Lions. Photo Credit: The Detroit Free Press.

No such drama was needed at Ford Field against the Lions yesterday, though. The Buccaneers clinched their spot in the NFC playoff field with a 47-7 victory. Tampa Bay has secured a playoff berth for the first time since 2007, joining Green Bay, New Orleans and Seattle in the NFC post-season. As of this posting, there are three NFC playoff slots left.

In yesterday’s game, “Old Man” Brady, 43, set a record for yards thrown in 4 consecutive quarters, at 668. He threw 6 touchdowns in the same 4 quarters. And the 47-7 win over the Lions was the most points in the first half for any NFL team this year.

Also yesterday, the San Francisco 49ers (6-9) upset Kyler Murray and the Arizona Cardinals (8-7). The 20-12 loss for the Cards means that the Seattle Seahawks are one win away from the NFC West title. It also means that the Chicago Bears are back with a shot at the playoffs.

Dolphins top Raiders by one point

In the third Saturday game, the Miami Dolphins edged past the Las Vegas Raiders, 26-25. The Dolphins needed to win to remain in contention for a playoff spot. Their victory eliminated the Las Vegas Raiders from the postseason. If the Fins can beat the AFC East champion Buffalo Bills next week, they’ll make the playoffs.

There are several games with implications for the postseason on deck today.

There’s a lot on the line in the NFC East today. All 4 teams still have a chance to win the division. The Washington Footballers (6-8) will win the division if they can win their last 2 games. They meet the Carolina Panthers today. Division rivals the Philadelphia Eagles (4-9) meet the Dallas Cowboys (5-9). And the New York Giants (5-9) are at the Baltimore Ravens (9-5). The Giants are holding onto a slender reed of a chance at the postseason, but the Ravens are also highly motivated as they try to overtake Miami for the last playoff spot in the AFC.

In the NFC North, the Chicago Bears (7-7) are back in playoff contention, so their game today at the Jacksonville Jaguars (1-13) is now a lot more interesting. If the Bears can win their last two games, they have a chance at the postseason. And if the Jags lose today, they’ll gain the number one draft pick. Either way, the Bears face the Green Bay Packers in week 17.

In another notable game today, the LA Rams (9-5) are at the Seattle Seahawks (10-4). If Seattle wins today, they can clinch the NFC West title. The Rams can still secure a wild card slot if they win or if the Chicago Bears (7-7) lose to the Jacksonville Jaguars (1-13) today. Hmmmm . . . neither of those outcomes appear to be a slam dunk. But we’ll see, Rams Nation.

In the AFC North, if the Cleveland Browns beat the Jets, they’ll clinch their first playoff berth since 2002 – as long as either the Ravens or the Colts lose today. Their division rivals the Steelers have already clinched a wild card spot in the playoffs. But as we previously noted, Pittsburgh is on a three-game losing streak and they’ll lose the AFC North title to the Browns if they don’t win at least one of their remaining 2 games.

In terms of straight-up good games today, there’s the Tennessee Titans (10-4) at the Green Bay Packers (11-3). Both teams are averaging more than 30 points a game. It’s expected to be the highest-scoring game of the week. Tennessee is trying to fight off the Indianapolis Colts for the AFC South title. While a Green Bay win would secure them a bye in the first round of the NFC playoffs.

Our Sports Desk advises us that the most likely scenario is that the Super Bowl Champion Kansas City Chiefs will be number one in the AFC. Followed by the Buffalo Bills, Pittsburgh Steelers and Tennessee Titans. The three remaining spots will go to some combination of the Miami Dolphins, the Baltimore Ravens, the Indianapolis Colts or the Cleveland Browns.

Let’s take a moment of silence here to acknowledge that the New England Patriots will not be in the playoffs for the first time since 2008. What are we supposed to do with all this newfound free time in January?

In the NFC, the Green Bay Packers are likely to be number one. Followed by the New Orleans Saints and Seattle Seahawks. Whoever wins the NFC East will be number 4. The Buccaneers would be number 5, and the final two are looking like the LA Rams and the Chicago Bears.

‘Ya heard it here first.

Tampa Bay Buccaneers quarterback Tom Brady – the oldest player in the NFL, by the way – was omitted from the players named to the Pro Bowl this year. Quarterbacks Aaron Rodgers, Russell Wilson, and Kyler Murray were the selections.

Brady has been selected for the Pro Bowl 14 times over the course of his career. His stats this year are certainly strong enough to warrant inclusion: Brady ranks in the top five in passing yards and touchdowns. However, the quarterback was sanguine about the situation, focusing instead on making on the playoffs.

Due to the coronavirus, this season there won’t actually be a Pro Bowl game. But the bragging rights for being on the list are still there.

The Brooklyn Nets crushed our beloved Golden State Warriors, 125-99, in the first official game of the 2020-21 NBA season. After over a year of anticipation and hype, both Kyrie Irving and new teammate Kevin Durant (KD) had impressive showings, with 26 and 22 points, respectively.

Also on the opening night of the season, in the Battle of Los Angeles the Clippers bested the reigning champion Lakers.

On just the second day of the season, the league was forced to postpone Wednesday’s game between the Rockets and Thunder as a result of coronavirus precautions. James Harden was ruled to be unavailable and fined $50,000 due to a violation of the league’s Health and Safety Protocols (he attended a birthday party for a friend and admitted to interacting with numerous people without wearing a mask).

In their second game of the season, the Brooklyn Nets blew out the Boston Celtics by 28 points. While it was a great win, sadly Kyrie Irving sustained an injury in that game. Meanwhile, the Warriors are now 0-2, as they lost to the Milwaukee Bucks by 39 points. There’s panic rising among Golden State fans, but we’re advising everyone to stay calm. It’s just two games.

The four finalists will take part in a virtual Heisman Trophy ceremony on Tuesday, January 5, 2021. If Smith nabs the prize, he’ll be the first non-quarterback to win the award since Derrick Henry in 2015, and the first wide receiver since Desmond Howard in 1991.

In this year’s College Football Playoff, the four teams competing for the national championship are Alabama, Clemson, Ohio State and Notre Dame.

It’s Alabama vs. Notre Dame in the Rose Bowl and Clemson vs. Ohio State in the Sugar Bowl, both on New Year’s Day. From there, the winners will meet in the national championship on January 11.

Vegas favors Alabama by 19.5 points over Notre Dame. And Clemson by 7.5 points  over Ohio State. So the smart money’s on Alabama vs Clemson in the championship game. If it goes down that way, it will be the fourth time in the past 6 years that the two teams will meet in the finals.

The NHL regular season is scheduled to be held between January 13 and May 8, 2021. To minimize travel, the four divisions will be slightly altered and teams will only play other teams within their division. One division will be largely comprised of Canadian teams.

This week in college hoops, No. 1 Gonzaga routed Virginia. And Duke’s women’s basketball team cancelled their season this week due to concerns about COVID-19.

That’s it. You’re good to go with the top sports headlines and coming attractions heading into the week of December 27, 2020. Stay safe and healthy, dear reader, and Happy Holidays. See you next week.