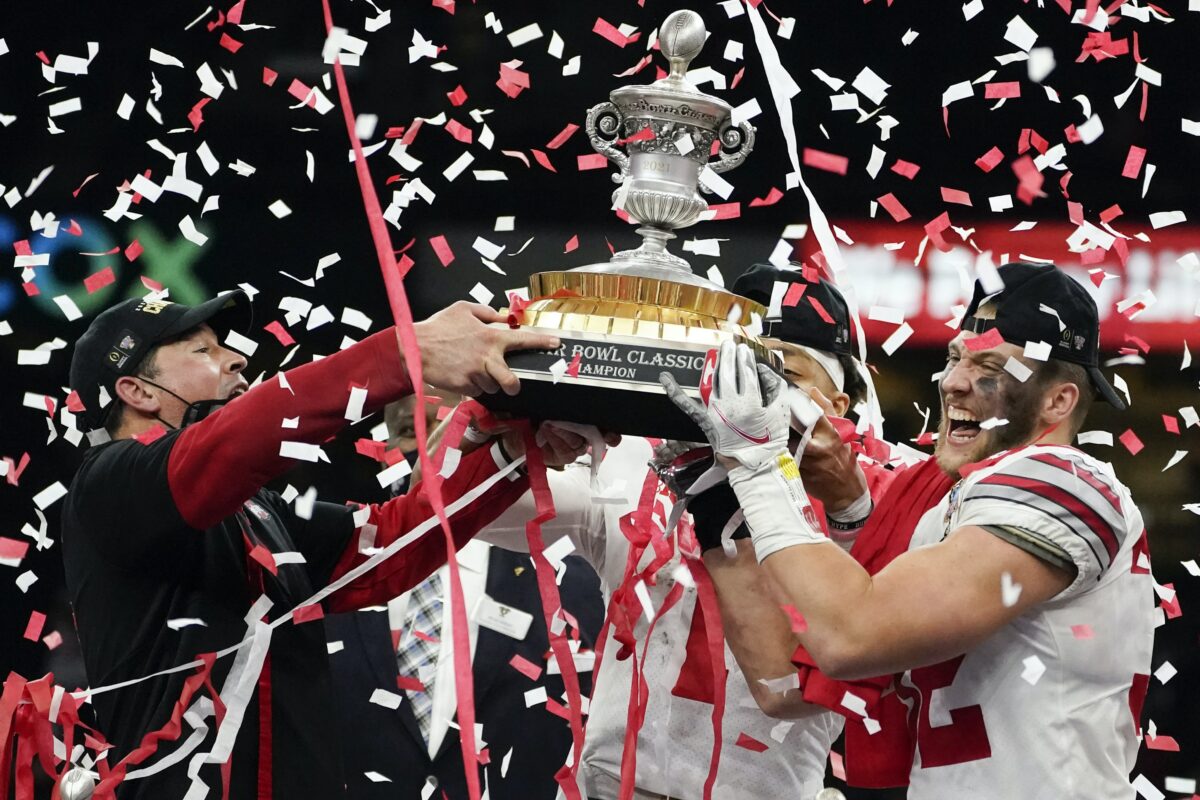 This Week in Sports Talk (TWIST) is our weekly roundup of top headlines and current events from the past seven days in the world of sports, plus a preview of what’s up next. Heading into the week of January 3, 2021, here’s how to talk about the top sports news of the moment. Skim it, and you’ll be good to go all week.

Happy New Year! Here are the top stories of note in the world of sports right now.

1. COVID-19 continues to wreak havoc heading into the NFL playoffs

As of this posting, all of the running backs for the New Orleans Saints are out due to exposure to COVID-19. One of the Pittsburg Steelers’ defensive backs is also out. In Miami, quarterback Ryan Fitzpatrick is out after testing positive for COVID-19, so the Dolphins will have to rely on Tua Tagovailoa. The Cleveland Browns have been out of their facilities all week because of the coronavirus protocol, and will be missing several players Sunday. The Browns haven’t made the playoffs since 2002, so its an unfortunate time for them to be less than full strength.

Commentators note that the Super Bowl winner this year may not be “the best” team – it may be the team that has best managed the COVID-19 challenge.

2. Injuries mount as NFL season draws to a close

Green Bay Packers star left tackle David Bakhtiari suffered a season-ending knee injury in practice this week. He appears to have torn his ACL, which will probably cause Bakhtiari to miss the Packers’ 2020 postseason run. That’s a big deal for Green Bay. He protected quarterback Aaron Rogers’ blind side, and he will be sorely missed. Our Sports Desk notes that a change in the offensive line this late in the season is never good – some have even said that without Bakhtiari, the Packers are no longer the favorites in the NFC.

The Indianapolis Colts need a win today against the Jacksonville Jaguars if they want a chance to play in the postseason. But they will have to do it without one of their best offensive linemen. On Wednesday, the NFL Network reported that left tackle Anthony Castonzo would be undergoing season-ending ankle surgery.

The LA Rams’ Jared Goff reportedly required surgery for a broken thumb he suffered during last week’s loss to the Seattle Seahawks, and reports are that he is unlikely to play this week against the Arizona Cardinals.

There are several games with implications for the postseason on deck today. In fact, the members of our Sports Desk says they can’t remember a week 17 with so many playoff implications.

Some teams are in control of their own destinies – meaning that if they win, they’re in the playoffs. There are a number of other ways for some teams to get into the playoffs, and they involve complications like losses by division rivals, tie breakers and the like.

Here’s a rundown of the key games today and what they mean for the playoffs.

The NFC East title can still be won by three teams, all with sub .500 records. The best any of them will be able to achieve is 7-9. Those teams would be the Washington Football Team (6-9), the Dallas Cowboys (6-9) and the New York Giants (5-10). All three started the season with 2-7 records, and yet one is going to make the playoffs. It’s a source of frustration for fans of teams like the Indianapolis Colts, who are 10-5 and could still easily miss the playoffs because their division rivals are so much stronger.

Speaking of Washington, the Football Team cut quarterback Dwayne Haskins this week, less than two years after selecting him in the first round of the NFL Draft.

Dwayne Haskins Jr. of the Washington Football Team. Photo by Will Newton/Getty Images.

It all comes down to today’s match-ups. If Washington beats the Philadelphia Eagles (4-10-1), they’re in the playoffs. The Cowboys are in if they beat the Giants (and vice versa).

Tampa Bay (and Tom Brady) have clinched one of the three wild card spots. Three teams are fighting for the other two: the Chicago Bears (8-7); the Arizona Cardinals (8-7); and the Los Angeles Rams (9-6).

The Chicago Bears can make the playoffs if they can beat the Green Bay Packers (12-3) this evening. They can also make it if the Cardinals lose today to the Rams.

The Arizona Cardinals (go, Kyler Murray!) are in the playoffs if they beat the LA Rams this evening. The Rams can make the playoffs by winning this game – if they lose, they can still make the postseason if Chicago ties or loses today.

Tennessee or Indianapolis can make the postseason by winning the AFC South. Right now, their records are tied, and if they end today that way, Tennessee will take the division title. Heads up Colts fans: you need your team to beat the Jacksonville Jaguars and for the Houston Texans to beat the Titans.

If the Cleveland Browns, Baltimore Ravens and Miami Dolphins win today, they’ll make the playoffs. If any of them lose, they’ll need at least one of the other two –  and in some cases, the Colts – to lose, too.

Two QBs get a bye week

Since there are so many playoff implications, the only teams actively resting starters in this week’s games are the Kansas City Chiefs (14-1) and the Pittsburgh Steelers (12-3). So, Patrick Mahomes and Ben Roethlisberger will get personal bye weeks.

That means this will be the first time Steelers quarterback Mason Rudolf will play against the Cleveland Browns’ Myles Garrett since the infamous “helmet brawl” last season that got Garrett suspended the rest of the season.

In addition to the stakes of getting into the playoffs, there are several head coaches who will see their future job prospects determined today. CBS Sports notes that by Monday morning, there will probably be coaches axed. Perhaps Adam Gase of the New York Jets. Or Matt Nagy of the Chicago Bears. Or Anthony Lynn of the Los Angeles Chargers. This is a tough business.

5. First woman serves as head coach during an NBA game

Spurs head coach Gregg Popovich was ejected during the second quarter of the team’s matchup with the Los Angeles Lakers. So Hammon took over the team. Like a boss.

And yes, girl, we see that black Valentino Rock Stud bracelet  – and we love it.

In other NBA news, this week the Milwaukee Bucks trounced the Miami Heat with a 144-97 win, and set a new league record for the most three-pointers in a single game, hitting 29 of them. The only player on the Bucks’ roster without a 3-pointer in this game? Reigning MVP Giannis Antetokounmpo.

Alabama handily beat Notre Dame, 31-14, advancing to its fifth CFP National Championship in the last six seasons. For the betting crowd, it was useful that Notre Dame scored a late touchdown and covered the Vegas spread. Alabama head coach Nick Saban got a 15-yard penalty for unsportsmanlike conduct, which is unusual for him, especially with the lead his team already had at that point in the game.

Ohio State crushed Clemson, 49-28, in the Sugar Bowl, which was sweet (see what we did there?) for many people for several reasons. For starters, the head coach of Clemson, Dabo Swinney, said he had voted for Ohio State as number 11 – meaning, he felt they had no business being in the final. Then they trounced him. After which LeBron James roasted him with a Tweet.

It was also a revenge game for Ohio State and Justin Fields. The Buckeyes got the revenge they were seeking after falling to Clemson 29-23 in last year’s Fiesta Bowl.

Clemson quarterback Trevor Lawrence’s stock in the upcoming NFL Draft has fallen a bit with this loss to Ohio State. Meanwhile, Ohio State quarterback Justin Fields’ stock has risen appreciably. That’s in no small part due to the incredible grit he demonstrated after a setback in this game.

Fields took a really tough helmet hit to his ribs in the second quarter. He stayed out for one play, then returned and threw a touchdown (meanwhile, the Clemson player who hit him was ejected from the game). Ultimately, Fields played the majority of the game injured. And he still accounted for 385 passing yards, 42 rushing yards and six touchdowns. People are already saying it was a legendary performance that will be remembered and discussed for years.

“That hit really took a toll on me,” Fields said on the broadcast after the game. “My ribs were killing me pretty much all game. What pushed me through was the love for my brothers. I would do anything for these guys.” So. Inspiring.

So, the dust has settled and ‘Bama and Ohio State will meet in the national championship on January 11. Alabama is the 7.5 point favorite to win. Vegas also thinks this has the potential to be a record-setting high scoring college football game – the over/under is set at 76 points.

Fun fact: it’s the first time in a LONG time that a team from a region other than the South has made it to the championship finals. The last one to do so was in 2014, and that team was . . . wait for it . . . Ohio State. And they won.

7. Who will win the Heisman Trophy?

Alabama quarterback Mac Jones is a finalist for the Heisman Trophy this year. Courtesy Photo.

The four finalists will take part in a virtual Heisman Trophy ceremony on Tuesday, January 5, 2021. If Smith nabs the prize, he’ll be the first non-quarterback to win the award since Derrick Henry in 2015, and the first wide receiver since Desmond Howard in 1991.

8. Federer withdraws from the Australian Open

Roger Federer announced this week that he’s withdrawing from the Australian Open this year.

The 39-year-old has been out of action since undergoing two surgeries to his right knee in 2020. The withdrawal means that Federer’s streak of 21 consecutive appearances at the Australian Open will come to an end.

The NHL regular season is scheduled to be held between January 13 and May 8, 2021. To minimize travel, the four divisions will be slightly altered and teams will only play other teams within their division. One division will be largely comprised of Canadian teams.

As of this posting, there are some certainties in college hoops – like No. 1 Gonzaga seems to be on fire again this season, with a 9-0-5 record (9 wins, no losses, and 5 cancellations or postponements due to COVID-19).

But there are some real surprises – like the fact that 4 teams that consistently dominated in the past – Duke, Kentucky, North Carolina and Michigan State – are currently 15-15 for the season.

Plans for March Madness are already well underway. Indianapolis was already slated to host the Men’s Final Four from April 3-5, 2021. Now the plan is that all 68 teams will play all rounds somewhere in the greater Indianapolis area to minimize the risk of COVID-19 outbreaks.

That’s it. You’re good to go with the top sports headlines and coming attractions heading into the week of January 3, 2021. Stay safe and healthy, dear reader. See you next week.