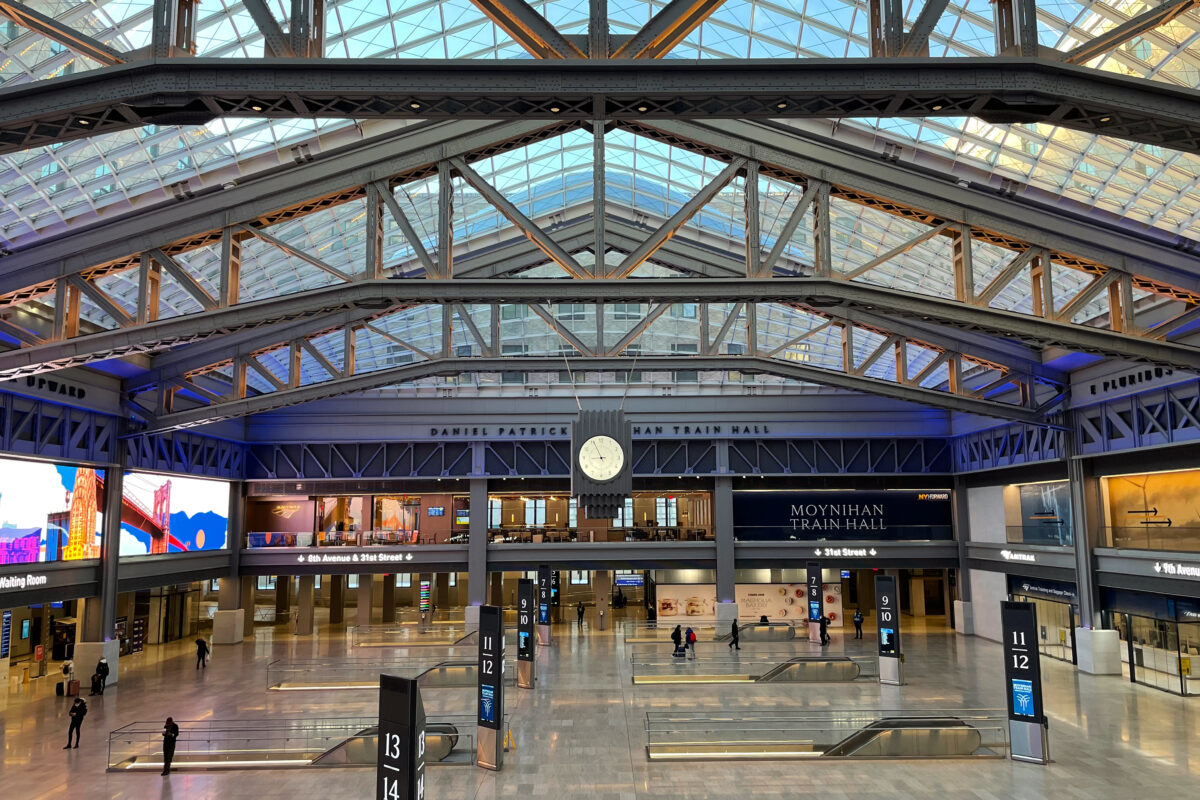 New York City is a dazzling, electric metropolis. Yet for almost 60 years, arriving in Gotham on an Amtrak train would make one believe they’d just entered a drab, unkempt city with no ambition to be anything more. New York Penn Station is many things. But soaring and inspiring, it’s not. But with a new year has come a new look. And now the West Side of Manhattan has an arrival (and departure) hall to rival the glories of its crosstown neighbor Grand Central Station. We’re sharing photos of first light at the stunning Moynihan Train Hall in New York City, including the contemporary art and the food and drink options. Spoiler alert: it’s a space worthy of the magnificent city it represents.

On a crisp bright winter morning in January 2021 we set out to see the latest arrival in New York City. The long-awaited Moynihan Train Hall at New York Penn Station opened on New Year’s Day.

It’s named for Senator Daniel P. Moynihan, who first introduced plans for a renovation in the early 1990’s. Construction on the project began in earnest in 2017, under the active leadership of Governor Mario Cuomo. After three years and the outbreak of a global pandemic, the new space opened on January 1, 2021.

a second chance for a once-spectacular site

The original New York Penn Station opened in 1910, and was considered an architectural marvel. But it was demolished in 1963. That act is still considered a tragic loss of one of the city’s most beautiful and historic buildings.

A majestic gateway to the capital of commerce in America, it was one of the most gorgeous spaces in the city, and its loss set off a firestorm of protest. The Pennsylvania Railroad Company went bankrupt and apparently the demolition was too far gone before anyone could stop it.

In many ways, that dark moment was what spurred a national preservation movement that saved many other such buildings – including Grand Central Station. The New York Landmarks Preservation Commission was created in its wake.

After decades of commuters and Amtrak travelers trudging through a dim and unlovely space that always seemed in need of a deep clean, now there’s a new, $1.6 billion train hall that will serve as a waiting room for arrivals and departures for Amtrak and Long Island Rail Road passengers.

The new Moynihan Train Hall is inside the James A. Farley postal building on Eighth Avenue in Manhattan.

The grand Beaux-Arts structure was designed by the famed architectural firm McKim Mead & White in 1912.

The stone stairs and the imposing columns add a sense of gravitas and grace to a neighborhood that was long lacking in both. Now, with the new renovation, there will be Class-A office space in place of most of the old postal facility (Facebook will move into the new office space). And yes, there will still be a smaller US Post Office on the site.

the luxury gift guide: the best from New York City

However grand they may be, these stairs are actually not the pathway into the new Moynihan Train Hall. If you enter on Eighth Avenue, you’ll walk through a prosaic set of revolving doors.

But then the magic starts.

The arrival and departure hall

From an anodyne white hallway, travelers will make a turn and find themselves in a space that feels as if it’s from another time – perhaps even another country. If you’ve been through some of the grand train stations of Europe, this space will remind you of them.

an acre of glass

The new waiting area and arrival and departure hall was designed by SOM, and we’d describe the overall aesthetic as industrial minimalist.

The building’s original steel trusses support brilliant new vaulted glass skylights (the New York Times reports that there is “an acre of glass”). The ceilings are 92 feet high, and through them you have clear views of the neighboring skyscrapers all around. The ceiling is a visual reminder of the original concourse – and a hopeful  note about what the future might hold.

Meanwhile, at ground level the space is also uncluttered and sleek. For example, the escalators that lead down to the train platforms are designed to disappear noiselessly into the floor.

The vibe is optimistic, sparkling and bold – it feels absolutely nothing like a crowded urban train station. On the morning we visited, light streamed though the glass, and the trusses were illuminated in a soothing shade of lavender. If only more transit hubs had such an abundance of natural light!

Along the perimeter where the roof meets the walls, the designers have rendered quotes to remind passersby of the spirit of America: E Pluribus Unum, Out of Many One. And of the spirit of the great state of New York: Excelsior, Ever Upward.

There are programmable LED light panels along one side of the new 255-000-square-foot hall that are ever-changing. Sometimes they’re an abstract pixilated pattern. Other times, they feature New York State landmarks or lighthearted views of iconic parks and forests across the state.

Even if your train is late, visually, you will never be bored.

Every great train station has a clock. And the one in Moynihan Train Hall nods to both the past and the future the city.

Designed by Peter Pennoyer Architects, the clock is nearly 12 feet tall and more than 6 feet wide.  The typeface, designed for road and railroad signage, is reminiscent of the clock in the old Penn Station. Intended as a meeting point – as is the one in Grand Central – this clock hangs 25 feet above the floor, and can be easily read from all four sides.

how to see the secret treasures of Westminster Abbey

In addition to the elements that pull the gaze upward, there are plenty of practical elements that make this new space highly functional. Among other amenities, the Moynihan Train Hall offers free Wi-Fi and a lounge for nursing mothers.

While most of the focus of this new space is passengers arriving and departing on Amtrak trains, there are also tracks and entrances for the Long Island Railroad.

Passengers will also still be able to access the Long Island Railroad trains from the “old” Penn Station.

the best fashion for a perfect day in New York City

There are three permanent installations of contemporary art throughout the new Moynihan Train Hall. They’re all quite different, but all are designed to make this space devoted to transit a place that will also inspire travelers to slow down. That these fanciful and beautiful works will catch the eye, causing commuters to look up, linger, pause and reflect.

Luminous in the ceiling at the 33rd Street entrance to the Moynihan Train Hall is a new work from Kehinde Wiley, who famously painted the official portrait of President Obama for the National Portrait Gallery.

It’s a vibrant and optimistic work hand-painted on stained glass. Called “Go,” the three panels depict young New York break dancers of color who appear to float across a blue sky, accompanied  by a pigeon. The artist says the images are inspired by Renaissance and Baroque paintings. The work is also an homage to Giovanni Battista Tiepolo’s 18th-century ceiling frescoes. Wiley notes that the woman’s pointing finger nods to the Sistine Chapel’s “Creation of Adam.”

Inside the entry on West 31st Street, also affixed to the ceiling, is The Hive, a collection of model-sized aluminum skyscrapers suspended upside down. Because they sit atop a mirrored panel and also have pin lights shining through their windows, they resemble glittering icicles, or stalactites. The installation incorporates 72,000 LED lights; six of the buildings can even change colors.

In an interview with The New York Times, Dragset said the work was named “The Hive” to reflect how cities, with their richness of diversity, function because people accept certain rules for coexisting. “It’s about a huge collaboration in order to allow everyone to survive,” he said.

Along the wall in the waiting area for ticketed passengers, there’s a fanciful and poignant series of panels that recreate nine moments from the history of the original Penn Station. According to The New York Times, Douglas – who is Canadian – digitally recreated the interiors of the demolished station based on old floor plans and photos. 400 actors dressed in period costumes to recreate the scenes in an empty hockey rink in Vancouver. Due to coronavirus precautions, the artist photographed each person separately. And then the images were layered together.

In one, vaudeville performers trapped during a 1914 snowstorm put on a show, led by Bert Williams, a Black singer of the time. Another features a couple kissing goodbye as a young man goes off to war. The sepia tones are another element that express timelessness and continuity – which is a soothing subliminal message in times like these.

The food and drink at Moynihan Train Hall

Ultimately, there will be 120,000 square feet of shopping, dining and retail space at the Moynihan Train Hall. But they won’t be ready right away. When we visited in January 2021, there was a lone Starbuck’s outpost (of course). And a small kiosk from “Taste New York,” selling locally made light bites and desserts.

The promised eateries in the Food Hall include Blue Bottle Coffee, Magnolia Bakery and H&H Bagels, among others.

Those are some of our photos, and we hope they’ll entice you to make your own visit to the new Moynihan Train Hall, to see the art, have some real New York food. And maybe take a train journey, too.

We’ll let New York Governor Cuomo have the last word on the matter. Here’s what the New York Times and Newsday reported on his thoughts about the new kid in town.