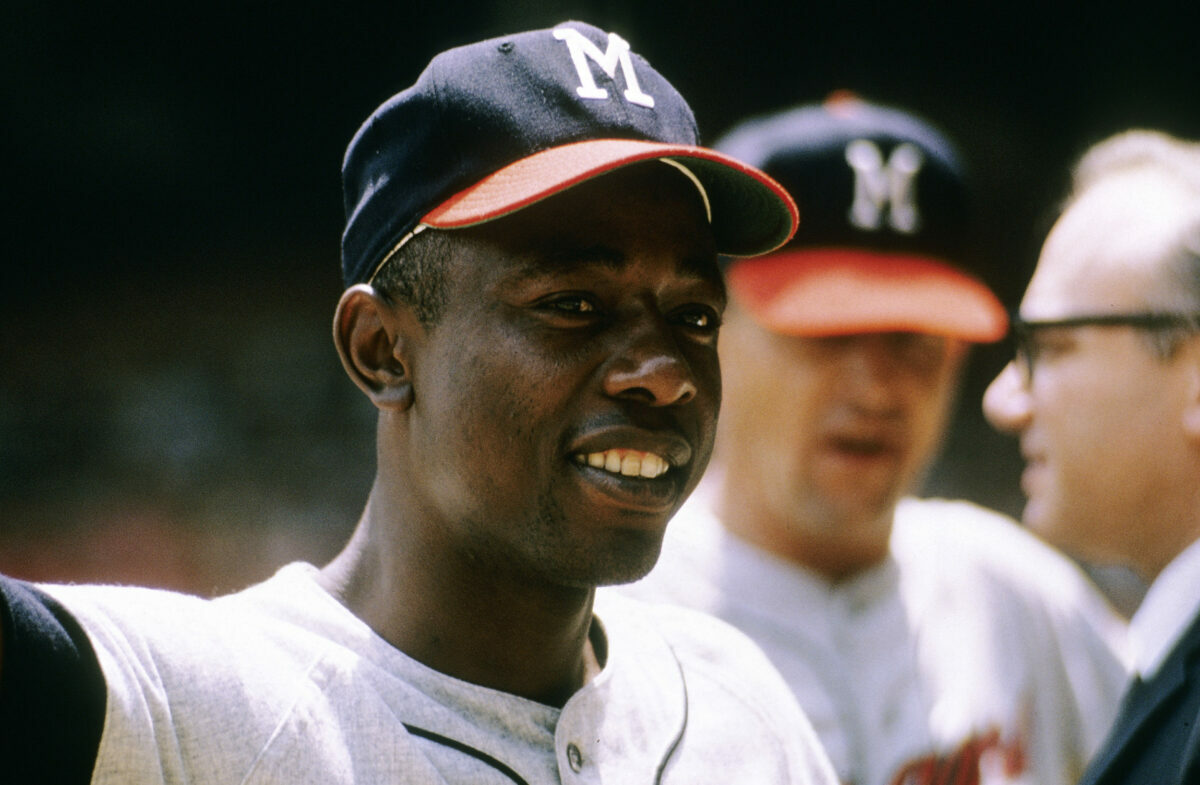 This Week in Sports Talk (TWIST) is our weekly roundup of top headlines and current events from the past seven days in the world of sports, plus a preview of what’s up next. Heading into the week of January 24, 2021, here’s how to talk about the top sports news of the moment. Skim it, and you’ll be good to go all week.

Hank Aaron, who played for MLB’s Braves, first in Milwaukee and then in Atlanta, died this week. Aaron was best known as baseball’s Home Run King. He retired with more career home runs than any player in MLB history, surpassing Babe Ruth’s 714 homers on April 8, 1974. He finished his career with 755 home runs, a number that has only been exceeded by Barry Bonds (whose achievements have been questioned due to the use of performance-enhancing drugs).

Aaron was also the all-time RBI leader. His 6,856 career total bases is 722 more than the next-highest player. Hank Aaron was selected for a record 21 All-Star teams, the most in MLB history.

Aaron was so much more than an athlete, though. He was also an advocate for social justice, a philanthropist, and a leader in the civil rights movement in America. Despite repeated death threats, he maintained his dignity and his commitment to racial equality throughout his life, on the field and off. He was awarded the Presidential Medal of Freedom in 2002.

2. one win away from the Super Bowl

It’s Championship Weekend in the NFL, and by the end of the day we’ll know who will be taking the field in Tampa Bay, Florida on February 7th for Super Bowl LV.

The Kansas City Chiefs kick off against the Buffalo Bills in the AFC Championship, with home field advantage for Kansas City. The game will feature two young quarterbacks, Josh Allen and Patrick Mahomes.

Chiefs fans are relieved that on Friday, coach Andy Reid confirmed that Mahomes has cleared all the NFL’s concussion protocols. The quarterback suffered a concussion in the third quarter of the Chiefs’ 22-17 win over the Cleveland Browns. So the reigning Super Bowl MVP is set to play this afternoon for another shot at a Super Bowl.

Josh Allen, 24, is the only quarterback playing today who has never played in a Super Bowl – so he has a lot to prove. At the start of this season, the consensus view was that Mahomes might develop a stranglehold on the AFC the way Tom Brady did for so many years. Allen’s ascension gives him a shot at making it a two-man race.

If he wins today, it’ll be an incredible accomplishment and a fitting stop along the way in a Cinderella story for the Bills.

The NFC game sees the face-off of two all-time great quarterbacks: the Green Bay Packers’ Aaron Rodgers and the Tampa Bay Buccaneers’ Tom Brady. In this “Battle of the Bays – Green versus Tampa” everyone is expecting an epic showdown.

At 43, Brady has seen a professional rebirth with his move from the New England Patriots to the Bucs. If he makes it to Super Bowl LV, it’ll be his 10th time in the big game. Brady would be only the second quarterback in history to go to the Super Bowl representing both an AFC team and an NFC team. And if the Bucs win, it’ll become the first time in Super Bowl history that one of the teams would be playing a home game.

Injuries mean that Brady have less support than he’d ideally like today, though. Tampa Bay is without a full complement of offensive players after former All-Pro wide receiver Antonio Brown suffered a knee injury in the team’s victory over the New Orleans Saints last week. On Friday, Head Coach Bruce Arians officially ruled him out against the Packers.

Aaron Rodgers has had an incredible season, and is the consensus choice for regular-season MVP at this point. If he leads the Packers to the Super Bowl, it’ll be his first time in the big game in 10 years.

3. Elsewhere in the NFL this week

While four teams have their eyes on the Super Bowl, everyone else is in “offseason mode,” deep in planning for the upcoming season. This week saw moves in the head offices and on the field for several NFL teams.

The Indianapolis Colts are without a starting quarterback with the retirement of Phil Rivers after a 17-year NFL career. Rivers spent 16 of those years with the LA Chargers, and just his last season with the Colts. Even though he never made it to the Super Bowl, he may ultimately make it the Hall of Fame.

Also on the quarterback front, everyone is expecting that the New Orleans Saints’ Drew Brees will announce his retirement in the next few weeks. Our Sports Desk reports that there is speculation that the Pittsburg Steelers’ “Big Ben” Roethlisberger may be next.

Those rumors gained steam after the news came this week that former Washington quarterback and first-round pick Dwayne Haskins has signed a one-year deal with the Pittsburgh Steelers.

As of this posting, Kansas City Chiefs offensive coordinator Eric Bieniemy, however, has not been hired as a head coach, despite his impressive record calling plays for the defending Super Bowl champions. The fact that Bieniemy is Black is raising questions – again – about hiring practices in the NFL and the oft-cited but apparently quite ineffective “Rooney Rule.”

The Houston Texans are the only team remaining with a head coaching opening. And their quarterback Deshaun Watson is openly advocating for Bieniemy to be the next Head Coach. But there are also reports that Watson is looking for a trade, and the New York Jets are his first choice team.

Watch this space for further updates. Meanwhile, Bieniemy has a game to win today!

4. Thomas will be the first woman to officiate in the Super Bowl

The NFL announced the lineup of eight officials assigned to work Super Bowl LV, and another barrier in professional sports has fallen.  Sarah Thomas will become the first woman in NFL history to officiate in the Super Bowl.

Sarah Thomas will officiate at the Super Bowl – the first time a woman has done so. Photo Credit: Getty Images.

After an unexplained absence, the Brooklyn Nets’ Kyrie Irving is back. And he’s done something quite wonderful with at least some of his time off the court. Irving confirmed that he purchased a house for the family of George Floyd, the Black man who was killed in May in Minneapolis by a local law enforcement officer. Irving told the media that he’s “just trying to do my part.”

So, Brooklyn’s “Big Three” took the court together for the first time on Wednesday night. James Harden, Kevin Durant and Irving were all in the lineup against the Cleveland Cavaliers. And long story short: the trio lost in double overtime, 147-135. The Nets lost again on Friday night to the Cavs, 113-125. Durant didn’t play in that game, though.

So far, as one local sportscaster notes, the Nets keep losing to weak teams and beating strong teams. Just about everyone is saying that the Big Three just need time on the court together to gel as a team. Time will tell.

Elsewhere in the NBA, the LA Clippers are tied for first in the Western Conference with the LA Lakers. The Philadelphia 76ers are in first place in the East, with the Milwaukee Bucks in second.

Spring training for Major League Baseball is scheduled to open in approximately four weeks. Meaning that lots of free agency deals are likely to be struck in the next few weeks. There was a big one this week, as a matter of fact. On Tuesday, the Toronto Blue Jays announced that they’ve signed George Springer to a six-year, $150 million deal.

Everyone had expected the New York Mets to land Springer – but they ended up firing their newly-hired General Manager on the very same day the deal was announced. Jared Porter lost his job with the Mets for sending unsolicited explicit photos (and, according to ESPN, a string of 62 consecutive unanswered text messages) to a female sports reporter in 2016.

Also this week, the LA Angels signed lefty Jose Quintana. The Philadelphia Phillies have made catcher J.T. Realmuto an offer of over $100 million. Infielder Justin Turner is said to remain as the LA Dodgers’ top choice in free agency. More updates to come.

Just one week into its new season, the NHL is already dealing with several pandemic-related issues. The Dallas Stars have yet to play a single game after a COVID-19 outbreak cancelled their opener. The Carolina Hurricanes have postponed multiple games.

Alex Ovechkin of the Washington Capitals was among the NHL players fined for breaking coronavirus protocols. Photo Credit: Getty Images.

Also this week, the league issued its first major fine to a team for breaking coronavirus protocols. The Washington Capitals were fined $100,000 after several players – including star Alex Ovechkin – were seen on videotape breaking the league’s safety protocols.

Last night, it was back to Fight Island in Abu Dhabi. In UFC 257, Conor McGregor returned to the Octagon to face Dustin Poirier in the main event. And the shocking outcome? Poirier knocked him out. The Louisiana native had previously lost to McGregor (who has declared that he’s retiring at least three times). It was a pay-per-view worth the price for avid MMA fans.

This week has seen a growing anxiety about the NCAA men’s college basketball season. So far, approximately 20% of its games have postponed or canceled every week due to COVID-19 protocols.

COVID-19 concerns are leading to discussions about the continuation of the NCAA men’s college basketball season. Photo Credit: USA Today.

As much as fans want to see a March Madness 2021, there is increased conversation about whether or not the college hoops season should continue. Watch this space for further updates.

10. Will the Tokyo Olympics go forward?

Finally, this week the Times of London reported that the July 23, 2021 start date for the Tokyo Olympics may be in jeopardy due to the continued global coronavirus pandemic.

Press reports in London question whether the Tokyo Olympics will actually be held as planned in 2021. Photo Credit: Getty Images.

Some publications even reported that the Games had already been cancelled. But late Friday, the Japanese government and the International Olympic Committee declared in statements that the rumors are “categorically untrue.” We feel for the athletes and coaches who have to endure this continued uncertainty. Let’s continue to hope that the Games can be held safely later this year. Stay tuned.

11. Woods out for the next few tournaments

Tiger Woods’ team announced that the player has had back surgery and will miss at least the next two PGA events.

Coronavirus protocols for the upcoming Australian Open in tennis require that players live in “quarantine housing,” upon arrival in the country. If any of them test positive, they must remain in quarantine for 14 days, with no practice time.

Now, a few players have now tested positive, and they have been vocal in their unhappiness about the policy and its impact on their prospects at the tournament.

That’s it. You’re good to go with the top sports headlines and coming attractions heading into the week of January 24, 2021. Stay safe and healthy, dear reader. See you next week.