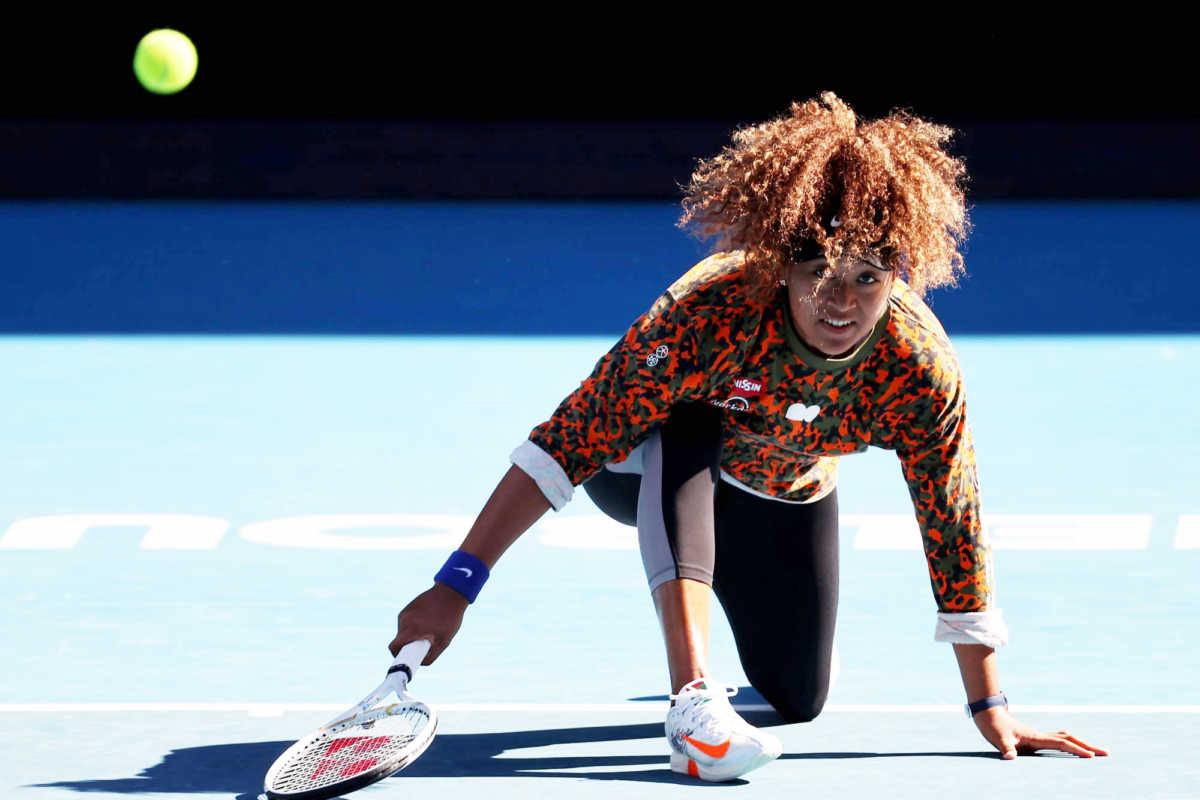 This Week in Sports Talk (TWIST) is our weekly roundup of top headlines and current events from the past seven days in the world of sports, plus a preview of what’s up next. Heading into the week of January 31, 2021, here’s how to talk about the top sports news of the moment. Skim it, and you’ll be good to go all week.

This is one of those times of year – perhaps THE time of year – when even casual sports fans start to talk a lot about sports. The Super Bowl is almost here! One week from now, it’ll be all anyone wants to talk about. So perhaps take this moment to start easing into the right frame of mind. We promise: we’ll make it fun!

It all goes down a week from today in Tampa Bay. Incredibly, one of the teams is playing on their home field. Also for the first time, the two previous Super Bowl winning quarterbacks are going head to head.

Dear reader, you should expect many puns and plays on the words “kid” and “goat” in the coming week. Don’t say we didn’t warn you.

There are lots of other fun facts to share about this game. This is the first time that a team has played in the Super Bowl in their home stadium. Tom Brady is the oldest man to ever play in a Super Bowl. Tampa Bay Head Coach Bruce Arians has never won a Super Bowl as head coach. If the Buccaneers win, it’ll be the first time since 2002. Kansas City is trying to win two Super Bowls in row – the last time that happened was when Tom Brady did it with the New England Patriots.

And if you’re the type who likes to contemplate worst case scenarios, here’s one from our Sports Desk: Super Bowl players are all being tested for COVID twice a day now. If any of them test positive, they will not have time to be re-qualified as per the NFL protocols. So anyone who tests  positive will be out of the game. What if Mahomes or Brady ended up testing positive?

Deshaun Watson has officially requested a trade from the Houston Texans. The team announced the hire of a new Head Coach, David Culley (formerly of the Baltimore Ravens coaching staff) about 24 hours before Watson’s formal request was made. Nothing personal, dude.

Watson was reportedly miffed that the Texans chose their new leaders (both General Manager and Head Coach) without much input from him. Regular readers will remember that we reported last week that Watson was pressing for Kansas City Chiefs Offensive Coordinator Eric Bienemy to be his new head coach. Bienemy has a spectacular record – his team is heading for their second straight Super Bowl. He’s also Black, which has caused a lot of discussion about the barriers to advancement in the NFL.

So where will the franchise quarterback go? Three teams in the AFC East seem most likely. Here’s hoping its the New England Patriots! We members of Patriots Nation have had our year out in the cold, and we want back in! Apparently, New York Jets fans are feeling the same way. And the Miami Dolphins are reportedly interested, too. Watch this space for further updates.

3. Will Rodgers stay with Green Bay?

Other franchise quarterbacks are also attracting a lot of press attention this week.

After losing the NFC Championship last week to Tampa Bay and Tom Brady, Green Bay Packers quarterback Aaron Rodgers is reportedly considering a move. He began this season angry that Green Bay chose to draft Jordan Love – his eventual replacement – in the 2020 draft, rather than making a pick that would help him get to Super Bowl LV. He’s ending it for the second straight time having fallen just short of a trip to the Super Bowl. Rodgers’ contract runs until 2023, but our Sports Desk reports that he’s using this as a moment to negotiate for higher compensation.

In an aside, Rodgers confirmed that it was, indeed, him in a TikTok video that made the rounds this weekend. He was spotted in a Packers stocking cap, hoisting a case of beer while riding in the truck bed of a GMC pickup. Rock on!

other quarterbacks potentially on the move

Meanwhile, the Pittsburgh Steelers “Big Ben” Roethlisberger says he’s willing to restructure his contract for 2021 and wants to stay with his team. He says he’s not concerned about the money. Usually when people say that, it means they really care a lot about the money. But let’s take him at his word.

Just days after quarterback Matthew Stafford and the Lions have agreed to part ways, ending a 12-season tenure in Detroit that proved to be disappointing, a deal came together. The Lions swapped Stafford for Jared Goff of the LA Rams. Goff is only two years removed from a trip to the Super Bowl, but that clearly didn’t deter the Rams from letting him go.

Jared Goff has been traded to the Detroit Lions; Matt Stafford will take his place with the LA Rams. Photo Credit: Getty Images.

There are still a few quarterback openings, and lots of speculation about who will land where. For example, the San Francisco 49’ers are reportedly not wedded to their starter, Jimmy Garappolo. Will he make a return to the New England Patriots, where he played in Tom Brady’s shadow for years? The Indianapolis Colts also need a quarterback with the retirement of Phil Rivers.

The Houston Texans continue to restructure their coaching staff, adding Lovie Smith, previously the Head Coach of the Illinois Fighting Illini and the Chicago Bears, as Defensive Coordinator.

He’s known for many things, including his amazingly cool white beard, which is apparently the envy of dudes everywhere.

As of this posting, the Brooklyn Nets have moved up to second place in the East, thanks to the addition of James Harden.

The Brooklyn Nets hit a franchise scoring record in a game against the Thunder this week. Photo Credit: USA Today.

They put up a franchise record 147 points in a win over the Oklahoma City Thunder, 147-125. In the West, the Utah Jazz have won 11 straight with their latest victory over the Dallas Mavericks.

The Utah Jazz are on an 11-game winning streak. Photo Credit: Getty Images.

6. No newcomers to MLB Hall of Fame (HOF) this year

For the ninth time in history, this week it became clear that no players will be inducted as part of the 2021 HOF class. That hasn’t happened since 2013. Curt Schilling, Roger Clemens and Barry Bonds all received votes of more than 70 percent, but none of them reached the induction threshold of 75 percent. All three have one more year of eligibility. Clemens and Bonds have both been accused of using steroids and other performance-enhancing drugs, and their career statistics bear an invisible asterisk as a result.

Shilling’s issue is about conduct and character, given that he has a history of intolerant and offensive commentary on social media. Upon hearing the news, Schilling immediately requested to be removed from the 2022 ballot. He got the highest vote percentage at 71%, but he’s apparently unwilling to go through the process and the potential embarrassment of being passed over one last time. The governing authority, however, quickly refused his request.

Why do the New York Mets always seem to have a connection to the latest big blowup in the world of high finance? Bernie Madoff made off with a significant amount of money from the team’s prior owners, the Wilpon family. Which caused Mets fans no small amount of agita, because they felt that the underinvestment in the team was partially due to the losses from that fraud.

Now comes word that this week’s drama involving Robinhood, Game Stop and hedge fund Melvin Capital has a Mets tie, too. New owner Steve Cohen’s Point 72 invested an additional $750 million in Melvin Capital, on top of the $1 billion the firm had already put in. Melvin’s founder is Cohen’s protégée. Let’s hope he’s spending his shoe money, and not his baseball money, on bailing out his friend.

In a bright moment, on Friday, fans packed the stands to watch some of the biggest names in tennis take to the court in Adelaide, Australia.

The exhibition event saw Serena Williams, Naomi Osaka and Rafael Nadal in action. It was the first in a series of “tune-up” tournaments ahead of the Australian Open, which begins February 8, 2021. The press reported that 4,000 fans attended. And just for a moment, it felt like the Before Times.

We learned that tennis star Serena Williams has launched a luggage collection with global “it” travel brand Away. In an interview this weekend with The Guardian in London, when asked “What was your most embarrassing moment?” Williams’ crisp response was: “I don’t get embarrassed.” This is why we love you, girl. In a world of public shaming for spite and entertainment, just keep your head up and keep moving.

That’s it. You’re good to go with the top sports headlines and coming attractions heading into the week of January 31, 2021. Stay safe and healthy, dear reader. See you next week.