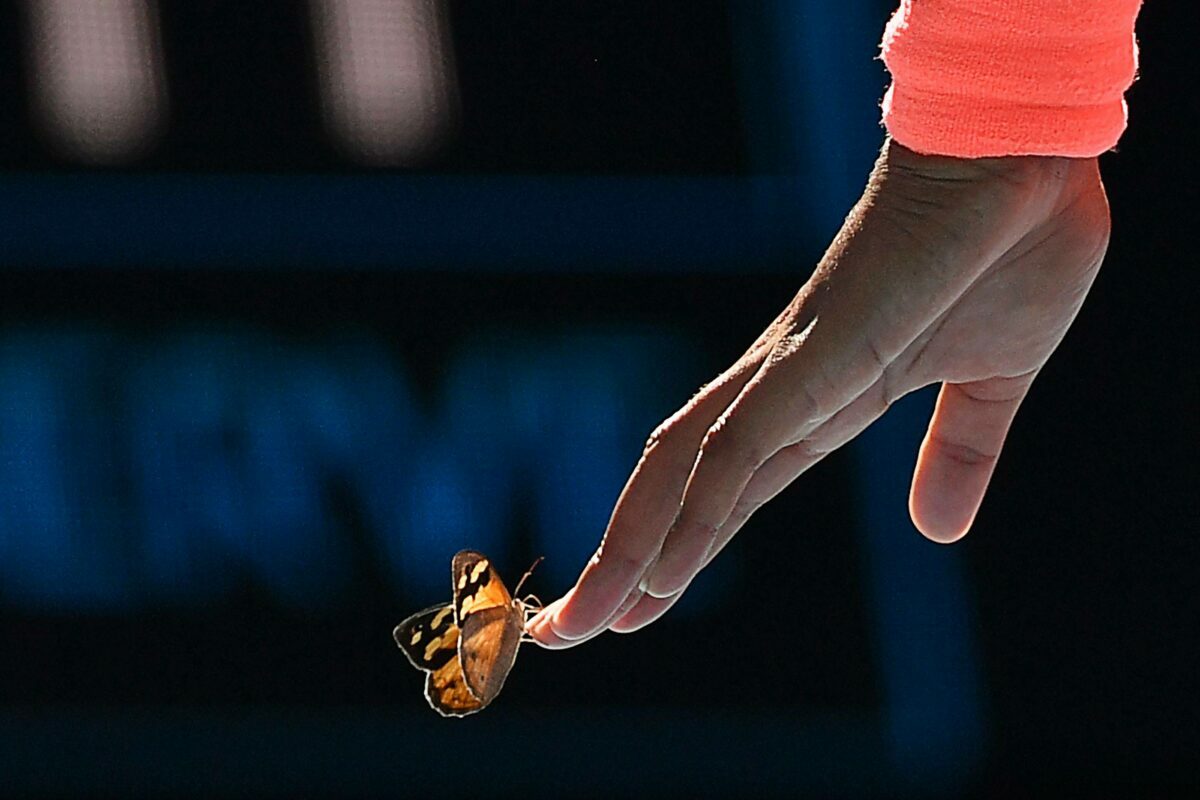 This Week in Sports Talk (TWIST) is our weekly roundup of top headlines and current events from the past seven days in the world of sports, plus a preview of what’s up next. Heading into the week of February 14, 2021, here’s how to talk about the top sports news of the moment. Skim it, and you’ll be good to go all week.

Butterflies, Buccaneers, baseball, Bubba and more – here are the sports stories that hit our top 10 radar this week.

Super Bowl LV is in the history books, and MVP Tom Brady has won his seventh Super Bowl title. And Tampa Bay is taking home its second franchise Lombardi Trophy. The Buccaneers dominated the former champion Kansas City Chiefs with a 31-9 win.

The Buccaneers had three Black coordinators and two female coaches involved in their spectacular win. Many are saying that one of them, Todd Bowles, the Bucs defensive coordinator and ex-Jets head coach, is the true Super Bowl MVP. He designed an amazing strategy that shut down probably the best offense in the NFL.

This week in sports February 14, 2021: Todd Bowles of the Tampa Bay Buccaneers is being hailed for his Super Bowl LV strategy. Photo Credit: Cliff Welch/Icon Sportswire via Getty Images.

Offensive coordinator Byron Leftwich and special teams coordinator Keith Armstrong also garnered high praise for shrewd and effective plays. All three are Black (as are 70% of NFL players). In fact, the Bucs feature the only all-Black slate of coordinators in the NFL.  Now remind us again, what was that people were saying about how hard it is to find great diverse NFL coaching talent?

The Buccaneers held their victory parade – fittingly – on the water in Tampa this week. During the aquatic parade, Tom Brady heaved the Lombardi Trophy from his boat to a different one filled with his teammates – thankfully, they caught it.

Also, Tom Brady apologized to the Chiefs’ Tyrann Mathieu via text after their heated confrontation during the game. And now everyone expects that Brady will be back in the Super Bowl next year, in the hunt for Number 8.

J. J. Watt and the Houston Texans are parting ways. Watt helped the Texans win six division titles over the past decade. Speculation is swirling over where he’ll go. The Pittsburgh Steelers are at the top of the list for a novel reason: both of Watt’s younger brothers — outside linebacker T.J. Watt and fullback Derek Watt — already play for the Steelers.

ESPN’s Jeremy Fowler reported Friday that Texans quarterback Deshaun Watson is “intrigued by” the Denver Broncos and San Francisco 49ers. He has asked to be released from Houston, although the team has not acceded to that request at this time.

This week in sports February 14, 2021: Deshaun Watson of the Houston Texans wants to be traded. Photo Credit: USA Today.

Meanwhile, the new head coach of the Jacksonville Jaguars, Urban Meyer, triggered a controversy only a month into his new gig. Meyer named Chris Doyle as the Jags’ new director of sports performance, then Doyle resigned one day later. Doyle left the Iowa Hawkeyes football program in 2020 after multiple former Iowa players said he made racist comments and belittled and bullied players based on their race. Meyer’s justification for the hire – that he had “known Chris for over 20 years” – only served to inflame the upset about the lack of diversity in the NFL’s coaching ranks.

This NFL offseason is likely to be filled with quarterback drama – and possibly some dramatic moves.

Russell Wilson and the Seahawks are reportedly discussing parting ways after Wilson expressed frustration with the team’s ability to protect him, and expressed a desire “to be more involved in the team’s decision-making process.”

The Las Vegas Raiders seem ready to take Wilson and move on from Derek Carr. If Carr is in play, some people suggest that the Pittsburgh Steelers should hire him. Meanwhile, Philadelphia Eagles quarterback Carson Wentz announced last week that he wants to be traded and the team is on board with that. But where will he land? And the New York Jets are trying to figure out what to do with Sam Darnold and their No. 2 draft pick.

The New Orleans Saints may also be in rebuild mode soon – Drew Brees has taken a significant pay cut, saving the team $24 million, that may be a prelude to his retirement. And the San Francisco 49’ers seem to open to trading their starter Jimmy Garoppolo.

The Brooklyn Nets visited the Golden State Warriors last night at Chase Center, marking Kevin Durant (KD)’s first return to the Bay Area since leaving Golden State. Steph Curry played well, but it was no match for the new Trio of KD, James Harden and Kyrie Irving. The Nets won, 134-117.

This week in sports February 14, 2021: Kevin Durant played in the Bay Area for the first time since leaving the Golden State Warriors for the Brooklyn Nets. Courtesy Photo.

This week, news emerged that the Dallas Mavericks (13-14) had not played the National Anthem before any of their 12 home games season-to-date. Apparently, no one had noticed until now. Given the dearth of fans in the stands, it may or may not have been meant as a statement about social and racial justice. In any case, the NBA quickly ruled that teams must play the anthem before their games, and the Mavs did so on Wednesday night in their game against the Atlanta Hawks.

Spring training begins on Sunday, February 28 this year, with 28 out of the 30 clubs in action.

Major League Baseball and the MLB Players Association have come to an agreement on safety and protocol rules for the upcoming season. And 2021 in the MLB will look a lot like 2020 – except that the current plan is for a full 162-game season.

There will also be new baseballs this season. The Athletic’s Eno Sarris and Ken Rosenthal report that the league sent a memo to teams outlining some changes made to the Rawlings baseballs that will be in use during the 2021 campaign. The new ball will be reduced in weight by under one-tenth of an ounce and will also be slightly less bouncy.

There’s excited chatter in Gotham that the New York Mets are in talks with the Chicago Cubs for a trade involving Kris Bryant, who won the 2016 NL MVP award.

Normally, the NASCAR Daytona 500 is a festive see-and-be-seen weekend filled with parties attended by celebrity actors, musicians and athletes. This year will be different, due to COVID-19 protocols.

One notable headline is that Bubba Wallace will make his debut driving for a new ownership team headed by basketball legend Michael Jordan. Jordan makes his official debut as a NASCAR team owner with 23XI Racing in today’s Daytona 500, making him the first Black principal owner of a full-time Cup team since Hall of Famer Wendell Scott in 1973.

Wallace is the only Black full-time driver at NASCAR’s top level. Last year, he successfully called for the series to ban the display of Confederate flags at racetracks.

The Selection Show for March Madness will be held on Sunday, March 14. The first round will be played March 19-20. The second round will follow on March 21-22.

Four former powerhouse teams may not make it through the selection this year. Kentucky, North Carolina, Duke and Indiana are all “on the bubble” for making the Big Dance.

The NHL has reached the quarter mark of its 2021 season. And Tampa Bay fans have just one more reason (in addition to Super Bowl LV) to feel good. The Tampa Bay Lightning sit at 10-2-1, atop the Central Division.

At the other end of the spectrum, despite landing No. 1 overall 2020 pick Alexis Lafreniere, the New York Rangers are at 4-6-3.

The Open won’t have fans in attendance over the next five days as Melbourne enters a COVID-19 lockdown.

In a moment of pure grace, a butterfly landed on Naomi Osaka as she played against Tunisia’s Ons Jabeur during their women’s singles match on Day 5 on Friday. She gently carried the insect to safety at the side of the court before closing out an easy 6-3, 6-2 victory.

According to chaos theory, infinitesimal moves are what actually change the world: “a butterfly flaps its wings in the Amazonian jungle, and subsequently a storm ravages half of Europe.” Who knows what wonders might be wrought by this lovely act of kindness?

Naomi Osaka paused during a match at the Australian Open 2021 to free a butterfly. Photo Credit: Business Insider.

Those who believe in karma will be happy to know that in the Round of 16, Osaka made an extraordinary comeback, defeating Garbine Muguruza. She was trailing 3-5 in the third set, and saved two match points before winning four straight games to advance to the quarterfinals. This makes us unreasonably joyful.

other developments in the round of 16

Serena Williams advanced after defeating Aryna Sabalenka in three hard-fought sets. She’s in the hunt for her 24th Grand Slam title, which would tie her with Australia’s controversial Margaret Court. Her adorable three-year-old daughter Alexis Olympia has been in the stands cheering her on.

On the men’s side, world number one Novak Djokovic shook off concerns over his fitness after sustaining an injury in the third round with a win over Milos Raonic to reach the quarterfinals. He’ll be joined by Rafael Nadal, Grigor Dimitrov and Alexander Zverev.

When the NHL’s Vegas Golden Knights took the ice against the Anaheim Ducks Thursday night, the team debuted gold chrome helmets that were blindingly bright. In a look perfect for a video from The Weeknd (“Blinding Lights”) or Harry Styles (“Golden’), the new bling attracted lots of editorial commentary on social media.

Hysterical Internet posts and memes followed, including one with a supportive message of love from C3PO.

Come on, people – it’s Vegas. This is how they roll!

That’s it. You’re good to go with the top sports headlines and coming attractions heading into the week of February 14, 2021. Stay safe and healthy, dear reader. See you next week.