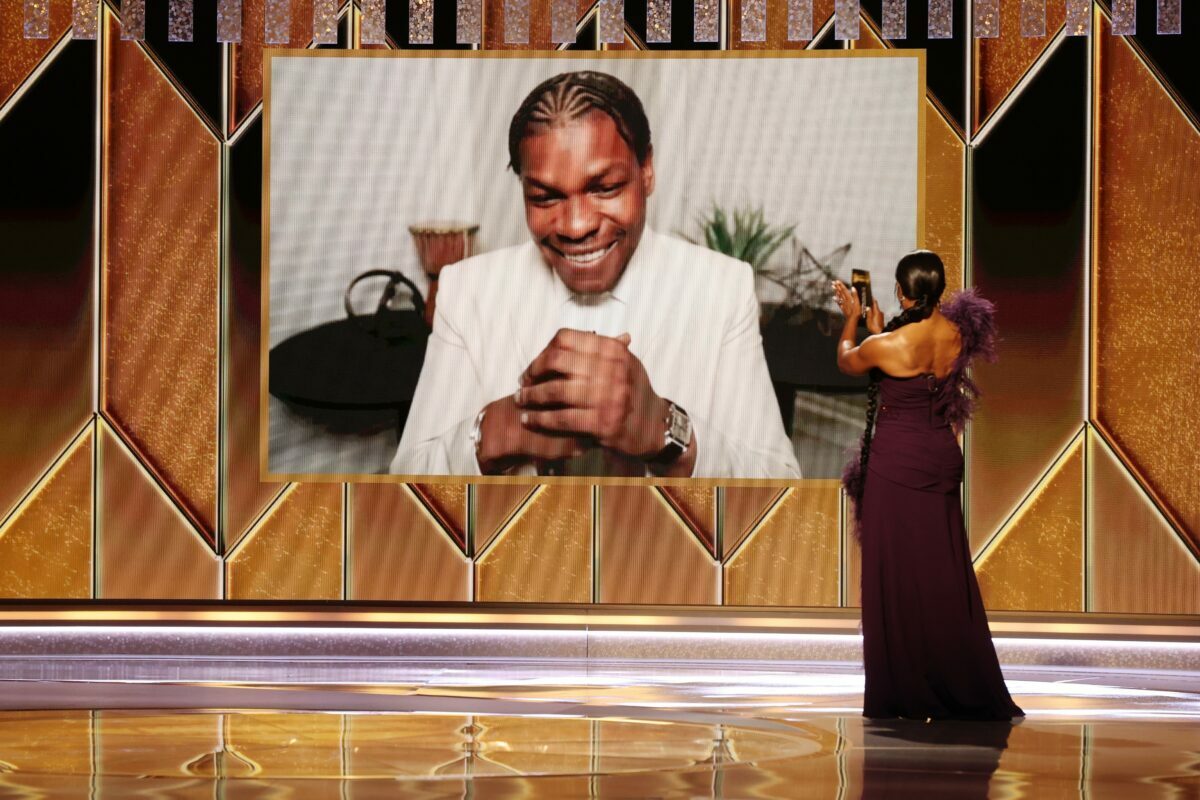 What can we learn about men’s style from this year’s Hollywood awards shows? Specifically, the men’s fashion at the Golden Globes? Our ace correspondent Tomas White has taken a close look at the style and fashion choices of the male stars on the virtual red carpet at the Golden Globes, and he’s found some stunning hits and some unfortunate misses. Here’s our take on the 9 men setting the luxury fashion bar at the Golden Globes 2021.

Men’s fashion hits and misses at the Golden Globes 2021

Hollywood’s leading men showed up for the Golden Globes in style this year, even if it was from a Zoom background instead of a proper red carpet.

Whether it was Schitt’s Creek star Dan Levy’s chartreuse haute couture suit or Jason Sudeikis’ more casual tie-dyed hoodie (a clear nod to the ubiquitous pandemic staple), we’ve called out the biggest hits and misses of the night for these male nominees and winners.

The 8 most glamorous looks from the Golden Globes 2021

The “Schitt’s Creek” actor nominated for “Best Supporting Actor – Television” stole the night wearing a runway Valentino suit with a matching sequined turtleneck and silver platform shoes. Whether you call it yellow, mustard, or chartreuse, there is certainly no missing it, and yet somehow it still exudes elegance.

The massively flared Gucci suit pants coupled with his beard and long flowing hair projected a retro 1960s flower child look. However, it was the massive flower broach on his lapel that truly set Twitter on fire (Many suggested it might squirt water!).

Zooming in from the deserts of Utah, Leto was appropriately wearing brown and grey shades, with his bright white shoes providing a pop of contrast.

The best dressed players, and fashion style we love, in the NFL

Dan Levy’s father, Eugene Levy has been seen as arguably one of the best dressed actors. While maybe not as flashy as his son, Eugene was looking dapper in his Dior suit and greyish blue shirt.

While not technically an actor, Jackson Lee, the son of Spike Lee, was chosen by the Golden Globes to act as a brand ambassador. And he was able to impress in his Gucci suit.

Eugene Levy might have been wearing an actual tie, but Jackson followed in Josh O’Connor’s steps in fashioning creative neck wear by using stylish black straps.

As the first awards winner of the night and the only one to have a Zoom technical glitch, we almost didn’t catch Daniel Kaluuya at all. Wearing Dior with intricate leather inlays and stitching on the lapels, Daniel looked both stylish and rugged at the same time.

A longtime French heartthrob, Tahar Rahim is becoming much better known on this side of the pond.

John Boyega was also sporting a cream look similar to O’Connor’s, but what really set people talking was when he confessed he was wearing black sweatpants, which he then quickly proceeded to show everyone. Kudos to his honesty.

Rounding out the winners is the person who wins the award for worst dress, in our humble opinion. However, in these pandemic times, this actually seemed to spark more sympathy and support than vitriol. Wearing a hard to miss tie-dyed hoodie, his piece was probably the first to sell out. Sleuths quickly found out it was sold by his sister’s fitness studio in New York and quickly went online and proceeded to buy them all out.

Men’s fashion hits and misses at the Golden Globes 2021

That’s our look at the best men’s fashion hits and misses and style lessons from the virtual red carpet from the Golden Globes this year 2021. What you’re top pick for best dressed gentleman of the evening, dear reader?