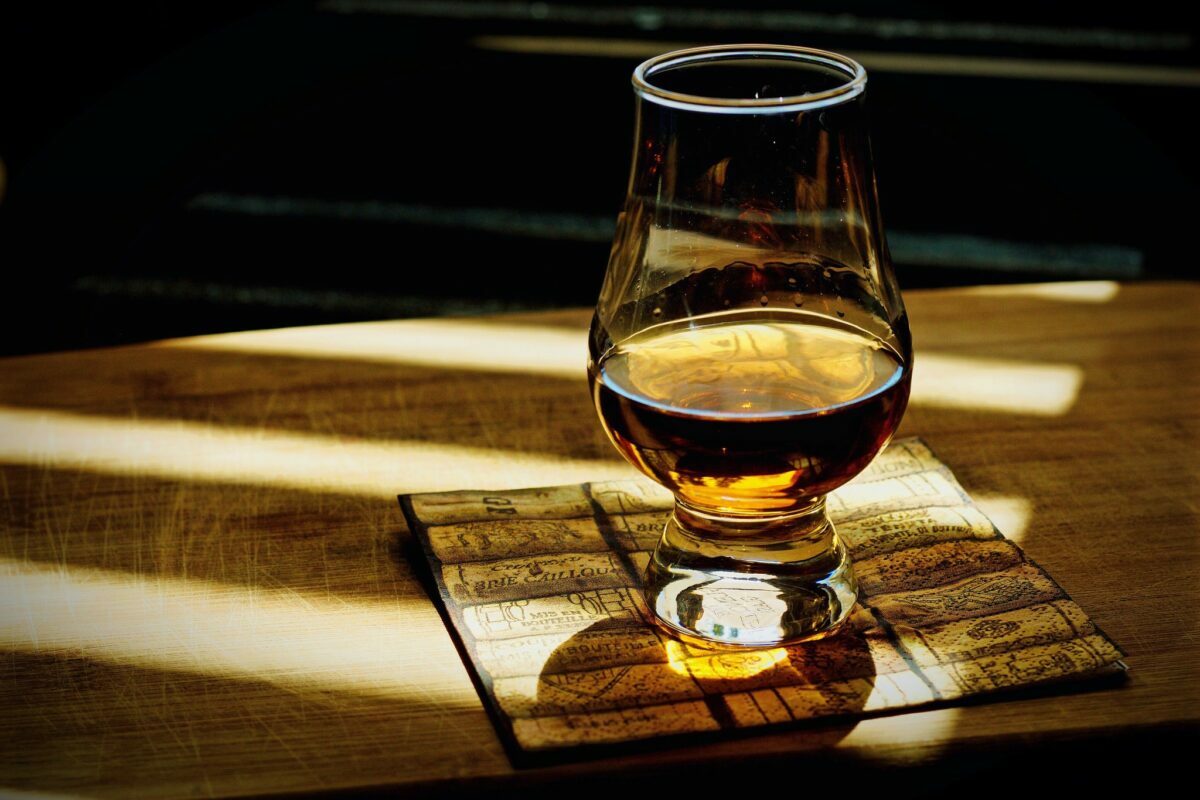 Whiskey and women? For too long, fine spirits – especially whisky (or whiskey) – have been the domain of male distillers and drinkers. But it’s a new day and there are new names to know now. In honor of Women’s History Month, our correspondent Jillian Tangen sat down with Julia Ritz Toffoli and asked her to share her favorite female-run whiskey brands and distillers right now. So if you’re wondering what premium whiskey brands and distilleries are owned and run by women, here are 5 names to know in the world of luxury spirits.

Like cigars, beer, motorcycles and leather armchairs, whiskey has long been linked to traditional norms of masculinity. But female-run premium whiskey brands are on the rise and they’re overturning a lot of the conventional wisdom in the traditional spirits business.

However over the past few decades, a new trend has emerged in the spirits industry.  Women now account for almost 37% of whiskey drinkers in the US – up from a mere 15% in the 1990’s.

After years and years of being considered a man’s drink, consumed at power brokering meetings in smoky steakhouses, why the change?

We had a chance to speak with the Women Who Whiskey founder and the newly appointed Whiskey Director of the Museum of Distilled Spirits, Julia Ritz Toffoli, to get the scoop on increased female interest in this beloved brown beverage.

She founded Women Who Whiskey, a travelling whisky appreciation club aimed at women who want to learn about and experiment with the spirit in a space free from judgment, to de-mystify and democratize the world of whisky.

According to Ritz Toffoli, the pairing of women and whiskey is actually nothing new.

The best brands of pink gin for summer G&T’s

a brief History of women and Whiskey

In fact, women and whiskey go back all the way to the 3rd century.

An Egyptian woman inventor, Maria Hebrea, invented a device that laid the groundwork for the modern still that distilleries use today.

And in the 18th century, before industrial distilleries were popular, women were distillers, producing everything from whiskey to beer.

Eventually though, events like Prohibition and the post-World War II era saw women displaced as distillers. That previewed a more general decline in whiskey consumption overall in the US by the time the 1970’s rolled around.

a renaissance in female-run whiskey brands and distilleries

Fast forward to today and you will find a renewed interest in whiskey. Thanks to the rise of craft cocktails, as well as a much wider, more diverse audience.

At the forefront though, are a vanguard of female distillers, blenders and tasters transforming the industry from within.  As more women have gravitated towards drinking and enjoying whiskey, so too have women moved toward distilling it.

In the spirit of Women’s History Month and with St. Patrick’s Day just around the corner, we asked Julie Ritz Toffoli about some of her favorite female run whiskey brands. Since some of us are planning to toast to all things green this month and also want to support women whenever we can.

According to Ritz Toffoli, these five women-made whiskeys are not only innovative, but delicious too.

What are the Female-Run Premium Whiskey Brands and Distilleries to know now?

Founded in 2008 by Sonat Birnecker Hart and her husband, Robert Birnecker, Koval is the first distillery within Chicago’s city limits since Prohibition ended.

Certified as both organic and kosher, Koval produces gin, whiskey and a variety of other specialty spirits while following a sustainable grain-to-bottle spirit-making process. You’ll find everything from alternative and innovative grains like Oat ($49) and Millet ($49) to more traditional Bourbon ($52) and Rye ($49).

Honoring the world’s first known African-American master distiller, Uncle Nearest is smashing stereotypes while racking up awards around the world.  Featuring an all female leadership team and the first African American woman to lead a major spirits brand.

The brand has earned more than 160 awards in its first three years, including Double Gold at the 2020 San Francisco World Spirit Competition and back-to-back honors of “World’s Best” at Whisky Magazine’s World Whiskies Awards.

The brand honors Nathan Green, known to family and friends as “Uncle Nearest,” a former Tennessee slave who taught Jack Daniel how to make whiskey. He is credited as Daniel’s first master distiller, mentor and teacher.

Today, Victoria Eady Butler, Green’s great-great-granddaughter, is the brand’s master blender. She is the first female African American master blender in history. She is also the first Black woman to win Whisky Magazine’s Icons of Whisky for Master Blender of the Year thanks to her 1856 Premium Aged Whiskey ($59) and 1884 Small Batch Whiskey ($49).

Founded in 2015 by Louise McGuane, J.J. Corry is Ireland’s first modern Whiskey Bonder. The company sources new-make spirit from Irish distilleries and matures it in a purpose-built bonded rackhouse on the McGuane Family farm in Cooraclare, Co. Clare along the Wild Atlantic Way.

The brand has won multiple awards for quality and taste. This includes gold medals in the Irish Whiskey Awards, the San Francisco Spirits Competition, and the World Whiskies Awards. Their most rewarded bottle is The Gael ($79), a classic style of blended Irish Whiskey, bursting with fruit flavors and underlying complexity.

Despite Wigle Whiskey being a James Beard Award semi-finalist and the most awarded craft distillery in the United States, its bottles still fly relatively under-the-radar.

A husband-and-wife-owned operation co-founded by Meredith Meyer Grelli and Mark Meyer, Wigle distills heritage rye whiskey in the same style as their Pennsylvanian forbearers. It uses 100% local organic ingredients and a copper pot.

Among their most popular products are their Pennsylvania Straight Rye ($45) made with regional Monongahela Rye.

Led by an all-female distilling team, Penderyn’s whisky is produced using a special pot that was created by Dr. David Faraday, descendent of the ground-breaking Victorian scientist, Michael Faraday.

The spirit ages in ex-Bourbon casks from the Buffalo Trace distillery. A six-month finishing maturation in Madeira wine casks follows. Penderyn’s Madeira Finish ($70) was the Winner of the Best World Whisky, Gold Medal at the 2012 and 2013 International Whisky Competition, in addition to many other accolades.

time to get schooled about rare Japanese whisky

With newfound knowledge of not only the history of women in premium whiskey, but also the female-run brands best to know, I asked Ritz Toffoli what a newbie like myself should consider if they want to give whiskey drinking a try.

First and foremost, Ritz Toffoli says, there’s no need to jump right into drinking whiskey neat, in fact, you shouldn’t.  Instead first try enjoying whiskey in a cocktail.  “There’s lots of fun and fresh drinks like Whiskey Sours and Lynchburg Lemonades out there to get you introduced to the taste.”

Ritz Toffoli explained that whiskey is a very broad category, filled with different flavor profiles much like wine. People are often too quick to write off the entire category because of one negative experience.

You wouldn’t stop drinking wine if you had one bad glass, right?

Instead, she suggests you think about what flavor profiles you tend to gravitate towards and go from there.  Like something a little sweeter?  Try Bourbon.  Or if spicy is more your speed, consider a Rye.

A great place to start if you have no clue what you might like is at a trusted bar or bartender.  They can walk you though the different styles and make suggestions based on your tastes.  Ritz Toffoli suggests a visit to American Whiskey for those based in New York.

Can’t make it to a bar? ‘Cause it’s still a pandemic, after all.  Ritz Toffoli suggests sampling an Irish Whiskey as a great starting point.  It’s triple distilled, making it extremely smooth and easy to drink.

Finally, and most importantly, let yourself feel vulnerable as you learn what you like and dislike. It may take a few tries before you figure out which type of whiskey is right for you.

There you have it, expert tips on how to enjoy and support women in whiskey this March and beyond. Many thanks to Julie Ritz Toffoli for sharing her favorite female-run premium whiskey brands and distilleries. Now we have  5 names to know in the world of women in the world of luxury spirits.

We don’t know about you, dear reader, but we’re ready to discover some whiskey. Cheers!