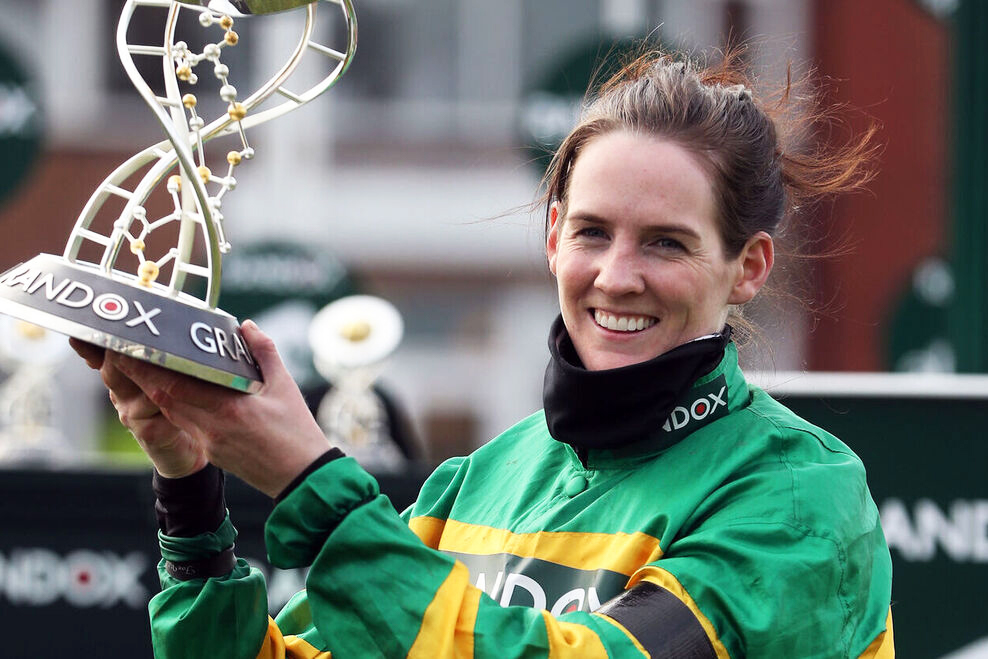 This Week in Sports Talk (TWIST) is our weekly roundup of top headlines and current news events from the past seven days in the world of pro sports, plus a preview of what’s up next. Heading into the week of April 11, 2021, these are the top 10 headlines you need to know to understand and join the conversation this week about professional sports, including football, baseball, golf, tennis and basketball.

Sometimes life imitates art, dear reader. Look no further than our cover photo this week. Yesterday, for the first time ever, a female jockey won the British Grand National horse race. Exactly like the plot of National Velvet! In the film, the jockey was played by Elizabeth Taylor. And in the film she was disqualified once officials realized she was female.

No such issue here – Rachael Blackmore is the undisputed champ.

top 10 headlines to know to understand and join the talk about sports this week: April 11, 2021

The Baylor Bears won this year’s March Madness tournament with a decisive 86-70 victory over Gonzaga. It was the first Baylor win in March Madness since 1948.

Meanwhile, the Zags missed their shot at becoming the first undefeated team to win the national title in 45 years.

For the first time, two teams from the PAC-12 conference faced off in the women’s March Madness Final. Top-seeded Stanford beat No. 3 Arizona in a squeaker, 54-53. The Cardinals won the tournament for the first time in 29 years.

The New York Jets this week traded Sam Darnold to the Carolina Panthers for 3 future draft picks. The team is moving on from Darnold after only 3 years. Our Sports Desk notes that at only 23, this may actually be a very good outcome for Darnold – it’s a chance to play with a more stable organization.

The Brooklyn Nets’ star Kevin Durant (KD) returned to the lineup this week – unfortunately just as fellow star teammate James Harden was declared out for a hamstring injury.

In the West, the Utah Jazz (40-13) remain in the top spot. The Phoenix Suns are running a close second. Meanwhile, the fearsome Lakers are number 5 right now. And our beloved Golden State Warriors (25-28) are number 10! Ugh! They suffered a 53-point loss to the Toronto Raptors last week, 130-77. And Friday night they managed to lose at the very last minute to the Washington Wizards, 110-107.

As the MLB season gets rolling, it appears that the Orioles, Red Sox, Yankees and Rays will be locked in a tight race all season in the AL East. The Twins and Astros currently lead their respective AL divisions. The Phillies lead in the NL East; the Dodgers in the West; and the Reds in the Central.

The New York Times reports that New York Met’s ace Jacob deGrom is throwing faster and more powerful pitches at age 32 than at any other point in his MLB career. While most players his age are starting to fade, he just keeps getting better. His only problem? His team can’t seem to deliver.

An odd twist of fate gave the Mets the win in their home opener. With the bases open, “Scooter” Conforto leaned into a pitch and got hit by a strike, but was awarded the base anyway – forcing in the winning run. But yesterday afternoon, it was back to the old pattern. The Mets lost 3-0 to the Marlins, wasting another brilliant deGrom start in which he went eight innings, striking out 14 batters to match his career high.

With the Boston Red Sox not much of a contender at the moment, the Tampa Bay Rays have become the new arch-nemesis of the New York Yankees. They won 4-0 last night.

Meanwhile, on the West Coast, MLB history was made by a hometown kid. On Friday night, Joe Musgrove of the San Diego Padres became the first pitcher to throw a no-hitter in franchise history. The Padres beat the Texas Rangers, 3-0.

This year’s French Open has been pushed back a week, to May 30, due to COVID-19 precautions.

The Masters golf tournament at Augusta, Georgia is back after only a 5 month hiatus (the 2020 edition was played in the fall due to the COVID-19 pandemic).

A 78-minute rain delay interrupted play for a brief time yesterday. When play resumed. Hideki Matsuyama, 29, took advantage of the improved playing conditions. He shot 65 and earned a strong position at the top of the leaderboard. He’s 4 strokes ahead of the rest of the field, at 11 under par.

Four players are tied for second place as the final round gets underway later today: Xander Schauffele; Marc Leishman; Justin Rose; and Will Zalatoris.

Meanwhile, earlier in the week local authorities reported on the auto accident that left Woods unable to play in this year’s tournament. The report says he was driving 83 miles per hour in a 45 mph zone. And that he somehow hit the accelerator instead of the brake just before swerving off the road and crashing his vehicle.

8. A-Rod may become a team owner after all

Following the drama of a failed attempt to buy the New York Mets alongside his fiancée Jennifer Lopez last year, former Yankees star Alex Rodriguez may finally achieve his goal. But in a different sport and city.

Press reports are that A-Rod and his financial partner billionaire Marc Lore have signed a letter of intent to buy the NBA’s Minnesota Timberwolves and the WNBA’s Minnesota Lynx.

Known as “the world’s most famous and demanding race” in equestrian circles, Blackmore rode Minella Times to victory. Britain’s The Observer reports that 32 horses with female riders had gone to post for the National before. Of those, only Katie Walsh, who finished third on Seabass in 2012, had finished in the first four.

Finally, we end this week’s report with a return to the site of the Super Bowl for another epic 2021 sports event. Wrestlemainia 37 is happening this weekend at Raymond James Stadium in Tampa! WWE welcomed live fans back after a year.

In the main event last night, Bianca Belair challenged Sasha Banks for the SmackDown women’s championship. In a thrilling match, Belair emerged as the winner.

Still to come? A triple threat match for the Smackdown Universal champ Roman “the Head of the Table” Reigns vs Edge “the rated R Superstar” vs Daniel “Yes” Bryan. Buckle up, kids – it’s gonna be wild.