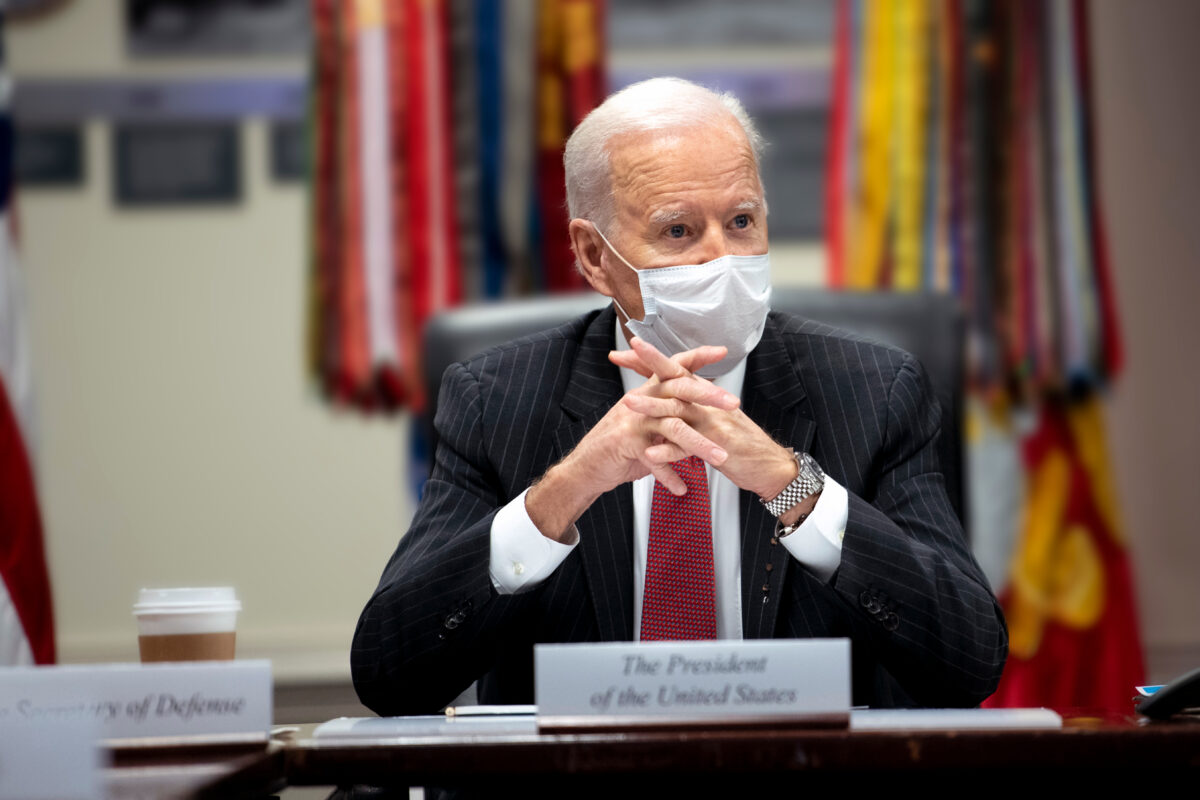 Some Presidents are style icons and ambassadors for American fashion (looking at you, JFK). Others, well . . . not so much. Done properly, though, the American President can set the tone for how a gentleman of authority best dresses for the era. (We anxiously await the day that a woman of authority takes that seat, but that’s a whole ‘nother thing). Our correspondent Tomas White has decoded the signature fashion style of President Joe Biden and he’s sharing the core wardrobe elements needed to channel his power look – from suits to denim, socks and – of course – the sunglasses.

what defines the power style of American President Joe Biden?

President Joe Biden mastered all-American style long before he was elected to the nation’s highest office. The fitted tailored suits, iconic Ray-Ban aviator sunglasses and rugged all-steel watches he has made his signature for most of his career in Washington exude an air of confidence, strength, assuredness and forward motion that is uniquely American.

As a Presidential candidate, Biden’s core campaign message was about a return to normalcy. And his classic power style is a not-so-subtle physical signifier of that promise.

American designers and fashion critics agree, Biden’s Presidential look is a win. With many commenting approvingly on how he is bringing back a quintessentially American sensibility and élan not seen since the Kennedy years.

True to his blue-collar Scranton background, Biden’s style is not flashy. However, he has a finely honed sense of how to dress properly for the occasion, even in the most formal settings. And while he might make it look effortless, do not be deceived. His wardrobe choices are all tailored to his messaging – and he has an unusually keen understanding of how a leader’s wardrobe elements can amplify core communications.

Fashion experts noticed clear changes to his style during the different phases of his campaign. Biden the candidate favored tailored blue jackets, non-matching pants, and open neck shirts with stripes or squares.

As president-elect, Biden immediately changed his style to come across as meaning business (and, more importantly, as the winner) by suddenly wearing ties and two-piece suits. His formal style once again changed when he became president by suddenly favoring solid white shirts, solid-colored ties (vs striped), and using more formal French cuff shirts with cufflinks.

Bright destiny predicted for the new president and team

But rest assured, his Ray-Bans haven’t gone anywhere. Whether it is wearing denim shirts and leather bomber jackets when not officially on the job, or a classic hand tailored Ralph Lauren suit and overcoat for his inauguration, here’s exactly what Biden’s style cues say about him.

Probably the most famous Biden accessory are his large Ray-Ban aviator sunglasses. First introduced in 1937 and issued as a standard piece of gear for soldiers in WWII, Biden claims to have been wearing them for 58 years since he was a pool lifeguard. They are so part of his look, that his very first Instagram post as VP consisted of a picture of them sitting on a table with him far in the background.

These sunglasses have definitely come in and out of style several times since Biden first started wearing them and some critics say that his consistency in wearing these reflect a baby-boomer stuck in his ways. You could just as easily argue though that they are timeless classics and that a return to the “old times” might be a welcome relief for now.

While maybe not as well-known as his sunglasses, Biden’s taste in watches has also started to garner attention. Biden is known to have a couple of Omega watches as well as a Rolex DateJust, which he wore for his inauguration. Among watch snobs, these would barely register as entry level watches, but they represent a significant step-up from his predecessors (Trump aside). Clinton wore a Timex Ironman, while George W Bush wore a Timex Indiglo. Obama arguable wore a step up with Detroit brand Shinola, but still far from a classic luxury brand.

Even though they are Swiss brands, the watches that Biden wears are still rugged and functional. He eschews precious metals and sticks to stainless steel bodies and straps. Consistent with his aviator theme for glasses, he is a proud owner of an Omega Speedmaster Moonwatch, which as the name implies, was worn by Buzz Aldrin in the moon. In fact, it is still certified as being worthy for space missions.  Compared to Trump’s flashy, all gold $40,000 Rolex Day Date, Biden’s watches complement his practical, rugged look while still imparting a sense of success and confidence.

The last president to wear a pocket square was Ronald Reagan, but Biden is quickly doing his bit to bring it back into fashion. While some might say it represents a homage to tradition and values, it is also a statement that Biden is more than just a suit. He has personality and is his own person. Some commentators have mentioned that it also shows attention to detail, which has been lacking recently. He might actually read a daily security briefing!

Biden’s choice in suit styles could hardly provide a greater contrast with his predecessor. While the former President wore ultra-luxe Brioni suits, Biden’s daily suits are still made by his hometown Wilmington, DE tailor, Wright & Simon, for under $1,000.

While “the former guy” preferred oversized boxy jackets reminiscent of the power dressing look of the 1980’s, President Biden opts for precisely tailored slim cuts that accentuate fitness and movement.

Big picture, his predecessor’s suits were almost a form of medieval armor. Whereas President Biden’s suits project openness and transparency. (Trump was also famous, or infamous, for wearing excessively long ties; we will leave you to analyze the subliminal messaging intended there, dear reader).

Of course, for the inauguration, Biden had to step it up a notch. He chose Ralph Lauren to create a custom-made suit and overcoat for the occasion. It is hard to think of a more iconic American brand than Ralph Lauren, and in fact Biden has a long history of wearing clothes from this designer. Wearing a crisp white shirt, a blue wool suit, and blue wool overcoat, Biden projected an image of gravitas and formality to an event that no one will take for granted anymore.

While Biden’s inauguration attire was custom made and designed, we found some similar looks.

What can be more Americana than leather bomber jackets and denim shirts? It’s no surprise that Biden is an avid wearer of both these articles of clothing. More surprising to some though, is his affinity for whimsical socks. Biden’s casual style also reflects his ability to wear classic clothing with a personal twist.

Since our commander-in-chief wears Aviator glasses and a watch that astronauts use, it only makes sense that he generally opts to complete the look with a bomber jacket.

The A-2 leather flight jacket was adopted as standard issue by the US Army Air Corps in 1931. They were briefly discontinued, but came back due to popular demand, and are to this day issued to Air Force personnel who have completed their mission qualifications. Of course, it is also hard not to think of Tom Cruise wearing this in “Top Gun.”

Originally exclusively for farmers and other hardscrabble laborers, denim has come a long way. While designer denim might be the norm these days, denim nonetheless still evokes an image of ruggedness, strength, and individuality. Amongst denim manufacturers it is hard to think of a brand as iconic as Levi’s, which is of course the brand that President Biden prefers.

Socks don’t announce themselves the way ties do. So why not have fun with them as a style element? After all, there is not much room for President Biden (or any other traditionally-dressed male) to express playful personality characteristics. So it is actually genius to play with this somewhat hidden wardrobe element. Amongst the socks he has been spotted wearing are ones with US flags and dogs (perhaps as an homage to his rescue German shepherds). British gents are famous for their statement socks – as is Canadian Prime Minister Justin Trudeau. We highly recommend that more Americans get in on this, especially in the post-Zoom era.

That’s our take on the core wardrobe fashion elements to channel the power style of American President Joe Biden, including suits, denim, socks and sunglasses. What do you think, dear reader? Are you up for a new pair of aviators this summer?