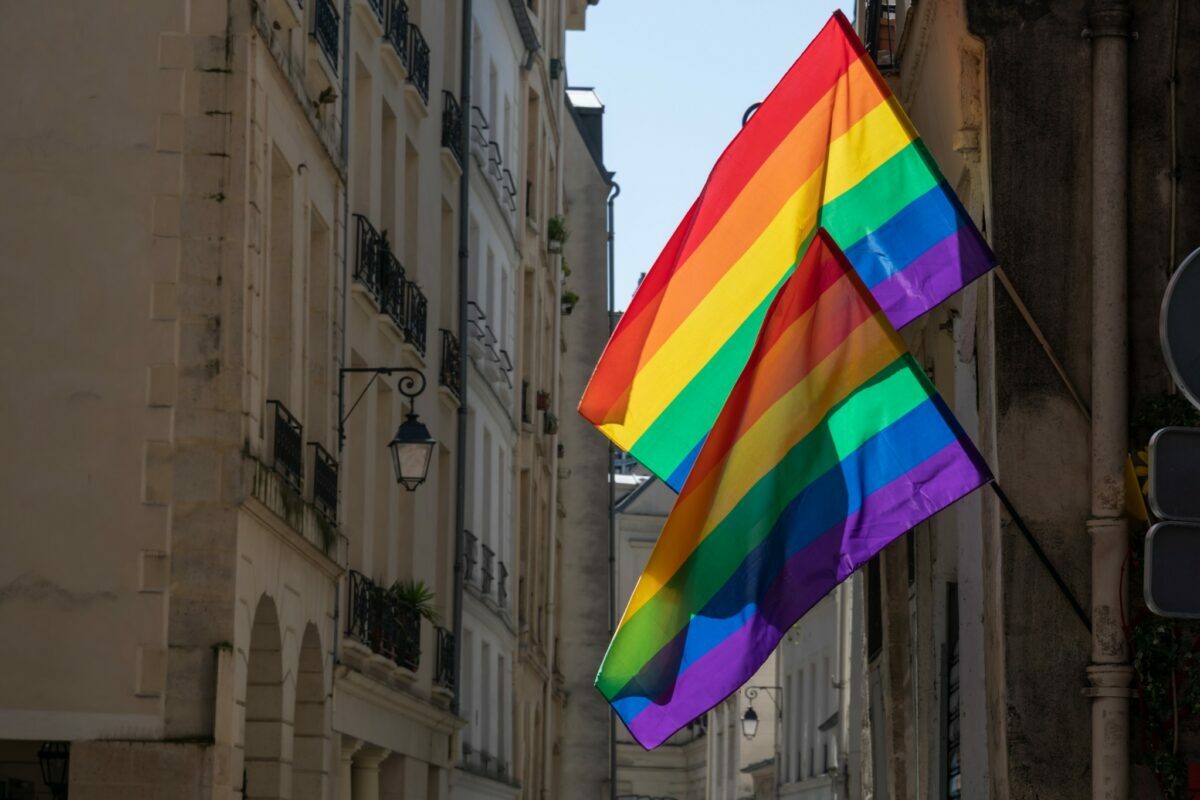 What films should we watch to immerse ourselves in for Pride Month? Our ace correspondent and cineaste Abbie Martin Greenbaum has curated a list of the 10 best movies to watch now in honor of June 2021 LGBT Pride Month, including dramas, comedies and documentaries.

Happy Pride! Though these days, LGBT Pride Month has taken the form of a rainbow-colored, brand-backed parade, we want to make sure that we don’t lose track of its origins.

The core purpose is commemorating the Stonewall Riots, which occurred in June of 1969. These were demonstrations that occurred at New York’s Stonewall Inn, in response to raids by police. We want to remember that it was Black, trans women who fought at the forefront of these riots, and who were key in the struggle for queer liberation.

And although we have come a long way, there is still a long way to go. In particular, trans people – and especially trans people of color – still face an immense amount of violence and discrimination, all over the world.

According to Them, 2020 saw more anti-trans homicides than any previous year, and 2021 is on-track to eclipse it. And as you may know, 2021 has also seen a record-breaking amount of proposed anti-trans legislation, much of which will affect transgender youth.

What are the best insightful films about Black Lives Matter?

With all of this in mind, we want to spend this Pride reflecting and educating ourselves, as well as celebrating. And more than anything, we want to immerse ourselves in queer stories, no two of which are exactly alike. There are hundreds of amazing movies we could recommend, but here are ten to get you started.

We don’t often suggest short films, but Happy Birthday, Marsha! is a must-watch. Filmmakers Tourmaline and Sasha Wortzel imagine what the evening of the Stonewall Riots might have been like for activists Marsha P. Johnson and Sylvia Rivera. Though this is a fictional film, we can’t imagine a more appropriate way to begin your viewing for Pride. The short is fourteen minutes, and available on Amazon Prime.

Need a pick-me-up this month? Try Dating Amber, the 2020 Irish coming of age film set in the 1990’s. Funny, fresh, and feel-good, this is the story of two closeted teens, Eddie and Amber, who stage a fake relationship in order to avoid attracting their peers’ attention. Growing up is never easy, and it’s even harder when you have to hide a part of who you are. Actors Fionn O’Shea and Lola Petticrew capture that tricky moment – and the kind of intense, life-changing friendship that can form there – with ease, making for an instant classic.

Wil’s life could not be more complicated. Not only is she dating her boss’s daughter, but she’s keeping it a secret from her mother – a task made more complicated when her mother shows up at her apartment in need of a place to stay. It turns out her mother has a secret of her own: she’s pregnant. The two must learn how to navigate their difficult relationships, and how to at last be open with one another. Starring Michelle Krusiec, Lynn Chen, and Joan Chen, this 2004 film from Alice Wu is a gem.

You may have already seen The Watermelon Woman. The 1996 film from Cheryl Dunye is the first feature directed by a Black lesbian, and is considered a cornerstone of queer cinema. Dunye plays a fictionalized version of herself, who works in a video rental store. She is making a documentary about 1930’s actress Fae Richards, and the movie follows her attempts to learn more about Richards’ past, and Richards’ partner, Martha – as well Cheryl’s relationship with her own girlfriend, Diana.

The best films to watch in honor of Pride Month: The Watermelon Woman. Courtesy Photo.

Another film you may have already seen is the 1990 documentary Paris is Burning – but if not, it’s required viewing.  Jennie Livingston’s documentary captures the community that formed around ball culture in 1980’s New York. The film includes both raw footage of ball competitions, and interviews with many people. As a monument to the struggles and joys of the golden era of ball culture, this is a vital piece of queer cinema.

The best movies to watch in honor of Pride Month: Paris is Burning. Courtesy Photo.

From French director Robin Campillo, this 2017 narrative film chronicles the experiences of an AIDS activist group in the 1990’s. The film splits its time between portraying the government’s response to the epidemic, and the searing personal effects on its main cast. This is a difficult watch, but a necessary one, conveying the devastation of a time that may be foreign to some viewers.

The best films to watch in honor of Pride Month: BPM. Courtesy Photo.

The first-ever Kenyan film to screen at the Cannes Film Festival, Wanuri Kahiu’s feature is a forbidden love story for the ages. Kena and Ziki are not allowed to be together – not only because homosexuality is illegal in Kenya, but because their fathers are political rivals, set to face off in an upcoming election. Though they do their best to hide burgeoning relationship, they will both suffer the consequences when their secret is revealed. This account of young, queer love manages to temper its many moments of heartbreak with exactly the right amount of joy, making for a movie that feels both tender and truthful.

The best movies to watch in honor of Pride Month, including dramas, comedies and documentaries: Rafiki. Courtesy Photo.

Marina’s life changes forever when her boyfriend dies unexpectedly. Because Marina is transgender, she is mistreated and even suspected in the wake of his death, turning her tragedy into a waking nightmare. Sebastián Lelio’s 2017 film received Oscar for Best Foreign Feature, and star Daniela Vega has been lauded for her incredible performance as Marina.

The best films to watch in honor of Pride Month: A Fantastic Woman. Courtesy Photo.

Dee Rees’s 2011 film Pariah set a high bar for all queer coming of age films that came after it. Adepero Oduye plays Alike, a teenage girl who is coming to terms with her sexuality, experiencing her first relationship, and struggling in her relationship with her mother. It walks the perfect line of authenticity, never shying away from difficult truths, but also refusing to leave the viewer in a state of hopelessness.

The best movies to watch in honor of Pride Month, including dramas, comedies and documentaries: Pariah. Courtesy Photo.

And last but not least, Moonlight. Chances are that you have already seen Berry Jenkins’ gorgeous Best Picture-winner. If not, move this film – certainly one of the best of the last decade – to the top of your list. In three segments, the film redefines what movies can do, using its three chapters – childhood, adolescence, and adulthood – to paint a vivid portrait of its main character, Chiron, and to tell an unforgettable queer love story.

The best films to watch in honor of Pride Month, including dramas, comedies and documentaries: Moonlight. Courtesy Photo.

The 10 best movies to watch in honor of Pride month

That’s our take on the 10 best movies to watch now in honor of June LGBT Pride Month, including dramas, comedies and documentaries. What’s at the top of your list, dear reader? Happy Pride Month!