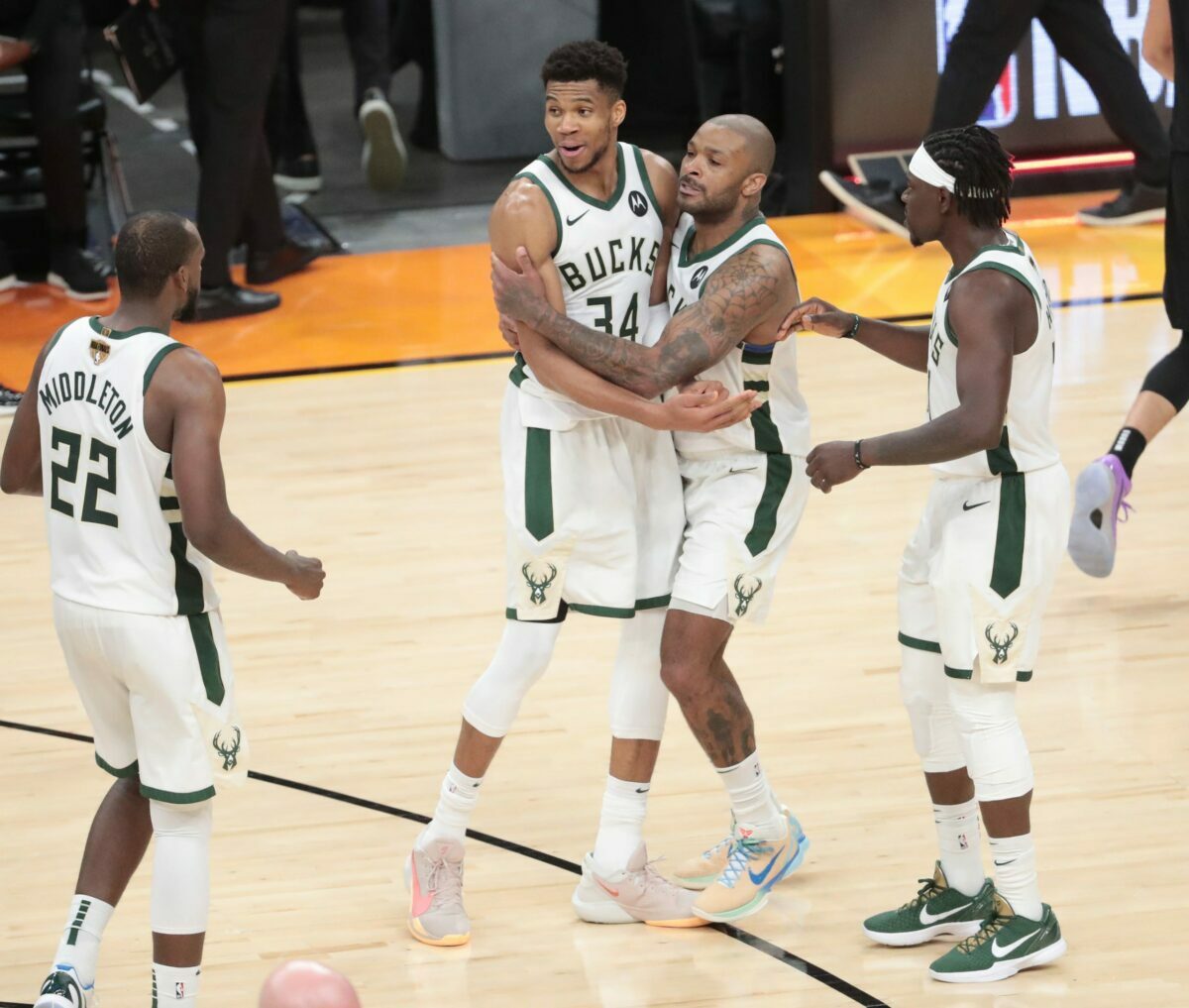 This Week in Sports Talk (TWIST) is our weekly roundup of top headlines and current news events from the past seven days in the world of pro sports, plus a preview of what’s up next. Heading into the week of July 18, 2021, these are the top 10 headlines you need to know about to understand and join the conversation this week about professional sports, including football, baseball, golf, tennis and basketball news.

Who run the world? According to the New York Times, five women will serve as the on-air broadcast team for the July 20 MLB game between the Baltimore Orioles and Tampa Bay Rays.

Melanie Newman has been the Orioles’ play-by-play announcer since for over a year. Sarah Langs will join her as the in-booth analyst. Alanna Rizzo will be the on-field reporter, and the pre- and post-game shows will be anchored by Heidi Watney and Lauren Gardner.

This will be the first time that there will be an all-women broadcast team for a Major League Baseball game. Let’s hope that soon it won’t be newsworthy when this happens.

Forget what we all heard about “Suns in 4.” The NBA Finals have turned into a genuinely thrilling tournament, and if anyone tells you that they know who will win, feel free to ignore them, ‘Cause nobody knows.

A week ago, the Suns led 2-0 and everyone had pretty much declared the whole thing over. Then the Bucks got to play at home, and everything changed. Turns out some time in the “Deer Forest” was all they needed to tie the series. The Suns’ Devin Booker had 42 points in Game 4, but it wasn’t enough. Bucks superstar Giannis Antetokounmpo made the play of the series so far (and perhaps one of the best defensive plays ever in the Finals) with a last-minute clutch block that won Game 4 for Milwaukee.

The top 10 headlines you need to know about to understand and join the conversation this week about professional sports, including football, baseball, golf, tennis and basketball news.

Yesterday evening, the action moved back to Arizona for Game 5 at the Phoenix Suns Arena. With celebrities including LeBron James and Adele in the stands, it was a night to remember. In an epic competition, the Bucks prevailed, 123-119. The Suns’ Booker once again delivered a game-high 40 points. However, Giannis Antetokounmpo, Khris Middleton and Jrue Holiday combined for 88 points.

A final-second alley-oop by Antetokounmpo brought a dramatic finish and a win. (For the curious, an alley-oop is an offensive play in which one player throws the ball near the basket to a teammate who jumps, catches the ball in mid-air and slam dunks it before touching the ground).

The Bucks franchise is one step closer to its first championship in 50 years; the series is 3-2, advantage Bucks. The first team to win 4 games wins it all. Game 6 is Tuesday evening in Milwaukee.

The 2021 MLB Home Run Derby was held on Monday night in Denver, and it was a repeat victory for Mets slugger Pete Alonzo. With 74 homers, he became the third player to win back-to-back Home Run Derbys. And the first player to hit 100 home runs in his combined appearances. He plans to participate next year, so keep your fingers crossed for a three-peat!

The top 10 headlines you need to know about to understand and join the conversation this week about professional sports, including football, baseball, golf, tennis and basketball news

Hopes were high for the Derby performance of LA Angels phenom Shohei “Baby Ruth” Ohtani, who is currently leading the league with 33 home runs. He did well but was eliminated in a “sudden death” hit-off in the AL final.

But that wasn’t the end of the story. Ohtani donated his $150,000 in winnings from the Home Run Derby to members of the Los Angeles Angels’ support staff, according to multiple reports.

The All-Star Game was Tuesday night at Coors Field in Denver. For the eighth straight time, the American League won, with a 5-2 victory over the National League.

The adorable Shohei “Baby Ruth” Ohtani became the first player ever to be named starting pitcher and starting Designated Hitter for the AL. He pitched the first inning of the game, and while it wasn’t particularly eventful, it was fun to see him in the spotlight again.

A new name to know to impress your baseball-loving family members and friends? Toronto Blue Jays’ first baseman Vladimir Guerrero Jr. He hit a 468-foot home run in the third inning and was named MVP of the game. He’s the youngest player in history to win that honor. You go, boy!

Just two days after the All Star Game, the New York Yankees had to cancel their first game after the break against the first-place Boston Red Sox. The team announced that six players were on the COVID-19 list, including Gio Urshela and Aaron Judge. In troubling news, five of the six were fully vaccinated, but still tested positive (although they were asymptomatic). The sixth player – reportedly Judge – was apparently not vaccinated. Because Judge was at the All Star Game, everyone is holding their breath to see if any other of the All Star players come down with it.

Entering this weekend’s 4-game series, the Red Sox had won all six games played this season between the American League East rivals. They crushed the pinstripes with a 4-0 shutout on  Friday night. Last night, the Yankees finally broke that streak with a 3-1 win. As of this posting, the Yanks are eight games behind the Sox, who continue to lead the AL East.

There’s an uneasy feeling in Tokyo with the Olympic Games slated to start this Friday. The IOC and the Japanese government have banned all spectators, local or visitors. And yet the threat of COVID-19 still hangs over the Games. As of this posting, three athletes and over 50 people associated with the Games have tested positive for the coronavirus.

Two weeks before NFL training camps start, Green Bay Packers quarterback Aaron Rodgers has still not committed to playing for the team this season. The speculation is that ultimately he will play this season, with a lucrative contract extension and a commitment from management that they’ll trade him in the next off-season.

It wouldn’t be a sports report without a mention of Tom Brady, right? For those keen for their weekly dose, here’s the word. This week Tom Brady acknowledged that he was playing all last season with a torn MCL. He had surgery during the off-season to cure it.

On the positive side, Brady’s legend grows ever greater. How do you play a whole season and win the Super Bowl (and Super Bowl MVP with a torn MCL? On the negative side, the NFL could fine Tampa Bay, arguing they should have disclosed the injury during the season. Assuming that they knew about it. Perhaps they didn’t? Watch this space for further updates.

8.  Oosthuizen leads heading into final round of British Open

Golf’s 149th British Open Championship is set to conclude today at Royal St. George’s in Sandwich, England. The Claret Jug is on the line.

As of this posting, Louis Oosthuizen is at the top of the leaderboard, just one stroke ahead of Collin Morikawa and three in front of Jordan Spieth.

Novak Djokovic is one win away from sweeping all four Grand Slam tournaments in one calendar year after his victory last Sunday at Wimbledon.

Next up is the US Open next month in Flushing Meadows, Queens. Serena Williams is trying to get in shape to play. And Djokovic is hoping to make history. Get your tickets now, dear reader.

The 108th edition of the Tour de France cycling race wraps up today with the traditional final-stage procession into the heart of Paris. Defending champion Slovenian Tadej Pogacar, 22, is on the verge of his second Tour de France triumph. Meanwhile, Mark Cavendish remains tied with Eddy Mercx – aka “The Cannibal” – with 34 stage wins. He has one more shot today at becoming the leading stage winner in history when he competes in Stage 21 on the Champs-Élysées.