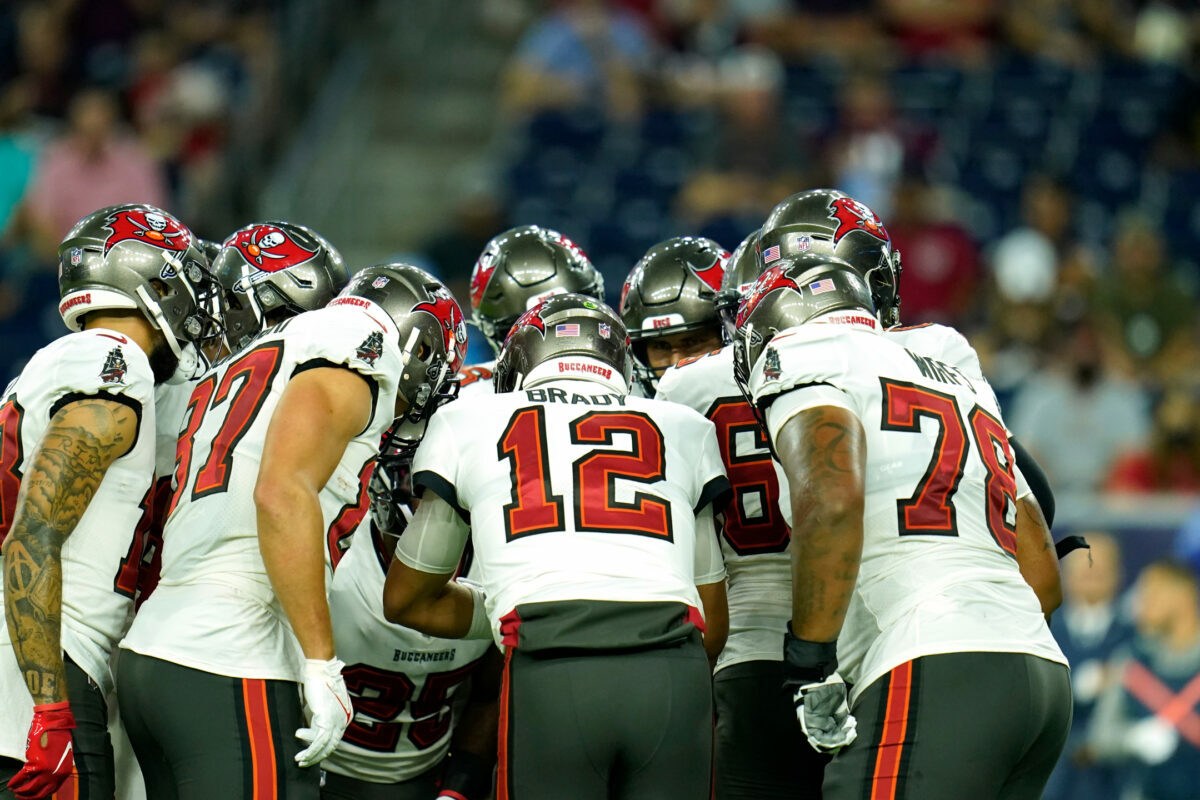 This Week in Sports Talk (TWIST) is our weekly roundup of top headlines and current news events from the past seven days in the world of pro sports, plus a preview of what’s up next. Heading into the week of September 12, 2021, these are the top 10 headlines you need to know about to understand and join the conversation this week about sports, including football, baseball and tennis news.

You may have heard that the NFL season has just started. And you may be wondering if anyone cares. Well, dear reader, the answer to that query is an emphatic yes. Duh!

Our Sports Desk happily shared the news that the Thursday Night football game between the Tampa Bay Buccaneers and the Dallas Cowboys had the highest viewership of any television program since . . . wait for it . . . the Super Bowl.

America agrees on very little, but apparently in this we are largely united. We are all ready for some football. So let’s go!

top 10 headlines to know to join the talk about sports this week: September 12, 2021

The first game of the NFL season was Thursday night, and it did not disappoint. It was an exciting, high scoring game – which everyone loves – and a perfect start for the season.

The Super Bowl champion Tampa Bay Buccaneers were heavily favored to win at home against the Dallas Cowboys. Instead of the blowout that some predicted, though, the Cowboys offense delivered a brilliant performance that nearly won them the game. Dallas quarterback Dak Prescott (who’s on the cover of the Sports Illustrated NFL preview edition) stunned by throwing for 403 yards, despite just exiting rehab for a strained shoulder muscle. And not having played a game for 11 months!

Meanwhile, Tom Brady and the Bucs offense was (as our Sports Desk notes) “generally great, but a little sloppy” – with 4 turn overs. And Tampa Bay’s defense was not as strong as everyone expected. Nevertheless, they prevailed. The Cowboys actually had the lead with 1 minute and 30 seconds left on the clock. Sadly for them, though, that gave Brady too much time. He drove down the field to kick a field goal and win. It was classic Brady – he’d done the same thing for years. A thrilling end to a great game. And just like that, the NFL is back.

Prepare the Game Day snacks, grab the good spot on the sofa, and plan on an afternoon and evening of good NFL games today, people.

Here are the matchups generating the most buzz today. The Seattle Seahawks are at the Indianapolis Colts (after injuries and COVID-19, can QB Carson Wentz regain what he had when he led the Eagles to a title run?). The Pittsburgh Steelers are at the Buffalo Bills (Bills fans are counting on the continued rise of QB Josh Allen, with new teammate WR Emmanuel Sanders complementing Stefon Diggs).

The Cleveland Browns visit the Kansas City Chiefs (in a rematch of last season’s AFC divisional playoff). And the Green Bay Packers are at the New Orleans Saints – although the game has been moved to Jacksonville due to the destruction caused by Hurricane Ida. Will Aaron Rodgers settle down? Will Jameis Winston prove to be the right replacement for the great Drew Brees?

We should also note that our New England Patriots will host the Miami Dolphins, a game in which Fins quarterback Tua Tagovailoa will meet up with his successor at Alabama, Pats’ quarterback Mac Jones. Go, Pats!!!

We’ll report back on all this and more next week.

Yesterday, No. 12 Oregon upset No. 3 Ohio State, 35-28. Texas played its first SEC opponent since accepting membership to the conference, and the Longhorns got thumped. The Arizona Razorbacks laid waste to the newcomers with a 40-21 win.

And in what may be the most important story of Week 2, a stray cat fell from the upper deck at the Miami-Appalachian State game, and was caught by the fans standing below. Now that was some real drama – and also an impressive display of hand-to-eye coordination. Well done!

As Lizzo says, “all the rumors are true.” The much buzzed-about expansion of the Big 12 conference is official. The conference, dealing with the pending losses of Oklahoma and Texas, has officially extended invitations to Brigham Young, Cincinnati, Houston, and the University of Central Florida. They will all join by 2024.

In the American League, the postseason picture is pretty clear. The Tampa Bay Rays in the East; Chicago White Sox in the Central; and Houston Astros in the West have pretty much sewn up their divisional titles.

Now the fight is between the New York Yankees, Boston Red Sox, Oakland A’s and Toronto Blue Jays for the two wild card slots. Two of those four teams will qualify for the wild card game, and the winner of that game will play the Rays. The Astros and White Sox will play the other game.

In the National League, the San Francisco Giants will likely play the wild card winner, and the Milwaukee Brewers and the Atlanta Braves will probably play the other game.

Of note, yesterday the Brewers’ aces Corbin Burnes and Josh Hader combined to deliver a 3-0 no-hitter, setting a record for the season. It’s the 9th no-hitter of the season, breaking a tie with 1884 for the most in a season. Fun fact: three of those no-hitters were won against Cleveland.

The NL wild card is being contested by the defending World Series champions the LA Dodgers and the San Diego Padres. However, the Philadelphia Phillies, New York Mets and Cincinnati Reds all have an outside chance. Which is pretty exciting, actually!

Despite the somber glory of participating in a Subway Series on the 20th Anniversary of 9/11, spirits are generally muted in Gotham as another frustrating season draws to a close.

The Mets crushed the Yanks in Game 1. But the Yankees snapped their  7-game losing streak in Game 2, with an 8-7 win at Citi Field yesterday. Even with this win, they remain in jeopardy of not making the wild card, as they let the Blue Jays back in the race when Toronto swept them in a 4-game series earlier this week.

Generally, however, both the Yankees and the Mets have massively disappointed their local fanbase. The passionate belief is that the Yanks just have too much talent on their roster to play so poorly so often. Meanwhile, the Mets and new owner Steve Cohen raised everyone’s expectations with a strong start and lots of talk about playing to win. But they lost momentum mid season, and have never regained it.

This is a tough town, of course. Until you win the World Series, you stink. But still. Derek Jeter’s induction into the Hall of Fame reminded us all of what it used to feel like to be a Yankees fan. And we want to feel that way again!

It was the final step in his bid to complete the first calendar-year Slam by a man in more than a half-century. But this afternoon in Flushing Meadows, Novak Djokovic came up short, losing in straight sets to 25-year old Russian Daniil Medvedev in the Men’s Finals of the US Open.

The last time a male player won all four Grand Slam tournaments was 1969, when Rod Laver did it. Going in, Djokovic was the favorite. And during the match, you could tell that the crowd was hoping he’d make history. But it was not to be.

Despite the absence of many of the best-known players (the Williams sisters withdrew before the tournament began and Osaka, Barty, Gauff and others were eliminated), the women of this year’s US Open have still managed to provide a generous dose of inspiration and excitement. And it’s all thanks to two teenagers.

In this year’s Finals, unseeded British player Emma Raducanu, 18, triumphed over unseeded Canadian Leylah Fernandez, 19 in straight sets, 6-4, 6-3. Raducanu became the first qualifier to win a Grand Slam, doing so in just the second Grand Slam tournament of her career. Billie Jean King presented her with the trophy. And on Monday, Raducanu will rise from No. 150 to No. 23 in the WTA rankings.

Unseeded Canadian Leylah Fernandez captivated the crowd as she made it to the Finals of the 2021 US Open. Courtesy Photo.

Both women may be part of the next generation of dominant female tennis players. Even though she lost the final, Fernandez consistently wowed the New York City crowds throughout the tournament. And she beat two Grand Slam winners (Osaka and Kerber) and two players in the top 5 (Svitolina and Sabalenka). CBS Sports reports that “spectators enjoyed her grit and determination en route to the final . . . the teenager developed a signature celebratory action of raising her fist in the air after winning a point, which pumped up the New York crowd even more.”

Yesterday, the glory of the good old days returned to Manchester, England, thanks to the return of Cristiano Ronaldo, 36. After leaving the club in 2009, Ronaldo played his first match since agreeing to sign with Manchester United in late August.

After a slow start, Man U caught fire, with Ronaldo scoring in each half and leading the team to an emotional 4-1 win over Newcastle. Perhaps at least in this corner of the world, happy days are here again.