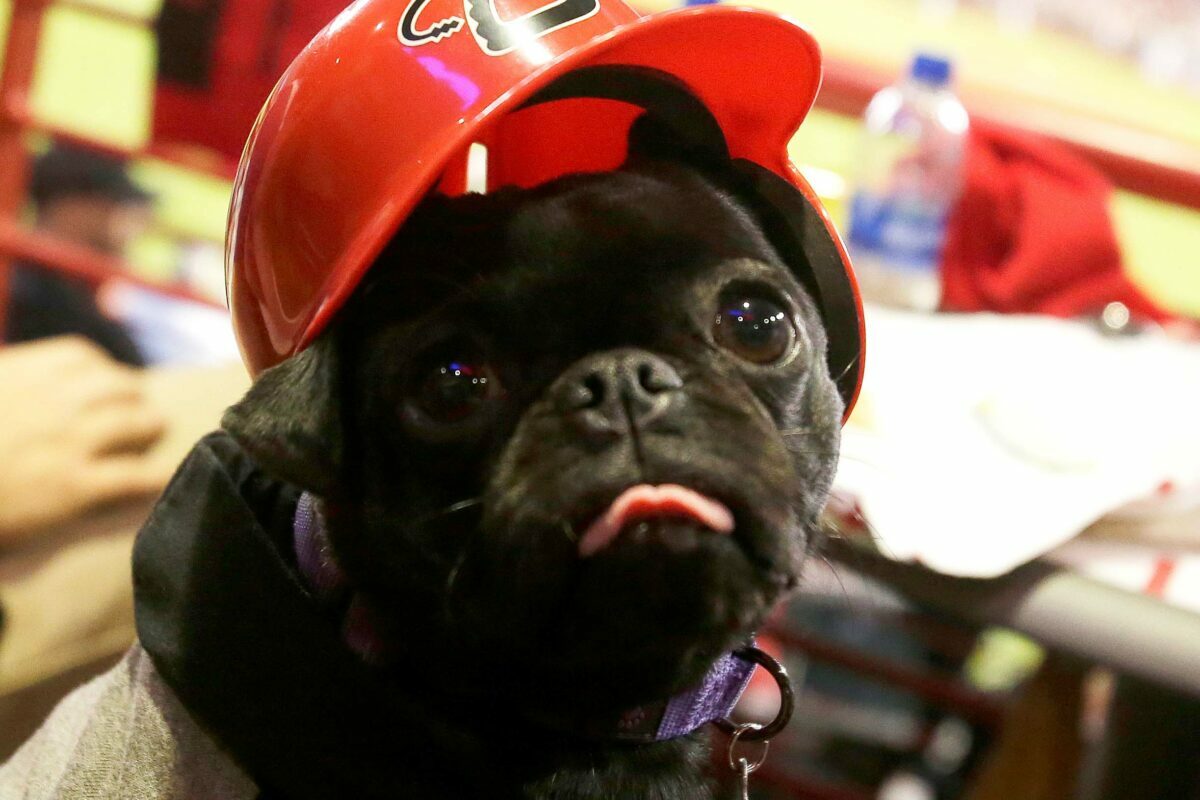 This Week in Sports Talk (TWIST) is our weekly roundup of top headlines and current news events from the past seven days in the world of pro sports, plus a preview of what’s up next. Heading into the week of September 26, 2021, these are the top 10 headlines you need to know about to understand and join the conversation this week about sports, including football, baseball and tennis news.

We begin this week with the combination of doggos, baseball and music. The trifecta of simple happy joys.

The Seattle Mariners hosted a special event called Bark at the Park, where fans brought their dogs to the ballpark. During the game, they were able to show off their dogs on the jumbotron to the strains of the theme song from The Lion King. It was truly adorable to see people hoisting their pups into the air, just as Rafiki does with Simba. The “Simba cam” shots went viral, and now fans all over the country are asking for the same opportunity.

Previously, these “Simba cam” shots were a chance for proud parents to display their darling little kids (and future MLB fans). Tough call, but we’re thinking it’s even cuter with canines. The Arizona Diamondbacks clearly agree, as they staged their own event shortly after.

We have a puppy, and we are All In on this idea! Hey, Red Sox, we know you have a few things going on right now. But we’re ready when you are. Just because summer is over doesn’t mean the Dog Days have to end.

top 10 headlines to know to join the talk about sports this week: September 26, 2021

1. Highlights (and lowlights) of Week 2 in the NFL

For New York fans, it feels as if the season is already over! The New York Giants (0-2) and Jets (0-2) are off to a terrible start. And the Giants’ schedule will only get worse in the next few weeks. They play the Falcons today. If they can’t win that one, it gets progressively harder, because their upcoming October games are against the Saints, Cowboys, Rams, Panthers, Chiefs and Raiders. It is not inconceivable that the Giants could be 0 – 9 by early November.

Meanwhile the Broncos are favored by 10 points over the Jets in today’s game. After Jets quarterback Zach Wilson’s 4 interceptions last week, optimism about the team’s prospects is in short supply. It could be a long, ugly NFL season in Gotham.

2. Thursday Night in the NFL

The Carolina Panthers (3-0) topped the Houston Texans (1-2) and remain undefeated. However, they lost running back Christian McCaffrey to a strained hamstring. Thanks to the schedule and their win, the Panthers have become the NFL’s first 3-0 team. The change of scenery has clearly been good for Panthers quarterback Sam Darnold. He was formerly the starter for the New York Jets (0-2).

Bucs-Rams is the game of the week

There are a number of intriguing games, but the game of the week has to be the Tampa Bay Buccaneers (2-0) and Tom Brady at the LA Rams (2-0). The Battle of the Undefeated!

The Rams are hoping the acquisition of Matt Stanford will bring them over the top this year. They’re looking to avenge themselves against Tom Brady for their defeat in the Super Bowl 3 years ago. Last year, the Rams beat the Bucs 27 – 24 in the regular season. So this should be interesting. Meanwhile, the Bucs’ Antonio Brown has apparently tested positive for COVID-19 and may not play today.

A programming note: next week the Bucs visit the New England Patriots in the “Brady versus Belichick Bowl.” This is one of the most anticipated games of the year, and the trash talking has already started. This week Brady’s trainer, Alex Guerrero, commented that Pats coach Bill Belichick treated the quarterback as if he was a rookie, even after winning 6 Super Bowls.

Cleveland Browns (1-1) coach Kevin Stefanski announced on Friday that Odell Beckham will make his 2021 debut on Sunday against the Chicago Bears after suffering a season-ending torn ACL in Week 7 of the 2020 season. Fans are keen to see whether he can get back in the flow after missing almost a year of playing.

Other notable matchups to know for the remainder of Week 3 are the Green Bay Packers (let by the hirsute Aaron Rodgers) at the San Francisco 49’ers. The Chargers at the Kansas City Chiefs. And the Philadelphia Eagles at the Dallas Cowboys.

And for our fellow lifelong members of Patriots Nation, the news this week is that the New Orleans Saints are heading to Foxborough to see what this new kid Jones can deliver against the 2-0 Jameis Winston.

Enquiring minds have been obsessing lately about the new hairdo that Green Bay Packers quarterback Aaron Rodgers has been sporting. He’s been growing his hair out, and can now rock a man bun if that’s his goal. What’s up with that?

The quarterback says his long hair is a year-long plan for his Halloween costume. In an interview this week, he said all will become clear come October 31. He promises he will dress up as “somebody who is a hero of mine who has longish hair,” but did not say to whom he was referring, leading the world to speculate on the answer. Will it be a Biblical hero like Sampson? A rock star like Gene Simmons? Or perhaps he’s doing a homage to Trevor Lawrence? The mind reels from the possibilities. We’ll report back as more information is unearthed.

The biggest game of the weekend was the Shamrock Series, with No. 18 Wisconsin playing No. 12 Notre Dame at Soldiers Field in Chicago. While the Badgers were favored by 6.5 points, the Fighting Irish absolutely dismantled them with a 41-13 victory. Notre Dame remains undefeated – and Jack Coan, the former Wisconsin quarterback who now plays for Notre Dame, definitively won his grudge match (although he had to leave the game early due to an injury).

Other highlights from the weekend? College football playoff hopes are a distant memory for No. 7 Texas A&M after the Aggies fell to No. 16 Arkansas, 10-20. The Texas Longhorns began playing in the Big 12 this weekend, and delivered an astounding 70-35 win over Texas Tech. Dang, those are practically like basketball scores!

No. 6 Penn State played unranked Villanova, and the Nittany Lions remain undefeated this season, with a 38-17 win. The last time they beat Villanova was in 1912.

6. In the National League, tight divisional races in East and West

The Milwaukee Brewers will soon clinch the NL Central division title and seal their spot in the post-season. But the other divisional races are too tight to call.

The NL West division title is a tight race between the LA Dodgers and San Francisco Giants, a situation that almost no one would have predicted at the beginning of the season. The Giants are the first MLB team to hit 100 wins this season, and the defending World Series champion Dodgers are currently one game behind them.

In the NL East, the Atlanta Braves lead the Philadelphia Phillies by only one game.

In the NL wild card race, one slot will definitely go to either the Giants or the Dodgers (whichever doesn’t win the division). Right now, the St. Louis Cardinals appear to be the most likely to get the second wild card slot. They’re on fire right now – as of this posting they have won 15 in a row, most recently yesterday afternoon.

7. in the American League, a fight to the finish for the wild card slots

In the AL, the Tampa Bay Rays, Chicago White Sox and Houston Astros are all leading their respective divisions. And no team can win enough games at this point to deny them the division championships (the Chicago White Sox have already clinched theirs – although our Sports Desk points out that they play in a weak division).

The real excitement, then, is the undercard. Both of the Wild Card spots in the American League are still up for grabs. As of this posting, the New York Yankees and the Boston Red Sox are tied in the wild card, and the Toronto Blue Jays and the Seattle Mariners are 2.5 back. The top two teams in this race will play in the wild card game, and whoever wins that goes on to play the division champion Tampa Bay.

The Yankees and the Sox have been in a pitched battle all weekend, with a three-game series. The Yanks crushed  the Red Sox 8-3 in game 1. Yesterday afternoon, they won again – this time thanks to a Grand Slam in the top of the 8th inning by Giancarlo Stanton. The last game in the series is this afternoon.

The 43rd installment of the Ryder Cup is underway at Whistling Straits in Wisconsin. The annual tournament features a team of United States golfers taking on European counterparts.

At the close of the second day, the US team holds a commanding lead, 9-3. That’s an almost insurmountable lead, so if the US were to lose at this point, it would be an epic collapse. Team USA is comprised of many well-known players: Dustin Johnson, Jordan Speith, Colin Morikawa, Brooks Keopka and Bryson DeChambeau. Our Sports Desk has it on good authority that Koepka and DeChambeau – who have been sparring with each other publicly for quite some time – sat down and called a truce heading into this tournament. They’ve put their differences aside to battle the Europeans.

9. Another score for the girls team!

Tennis’s Laver Cup sees six top male European players take on six of their counterparts from the rest of the World. Each day of the three-day event sees three singles and one doubles match. The team captains are always “legends of the sport.” This year the captain of Europe is Bjorn Borg, and the captain of Team World is John McEnroe.

Unlike the aforementioned Ryder Cup, in the Laver Cup the Europeans are coming out on top.

Stefanos Tsitsipas lost his first two matches against Nick Kyrgios, but Tsitsipas ultimately defeated Kyrgios 6-3, 6-4 in the Laver Cup, held at TD Garden in Boston this weekend. It was his first career win against the Australian.