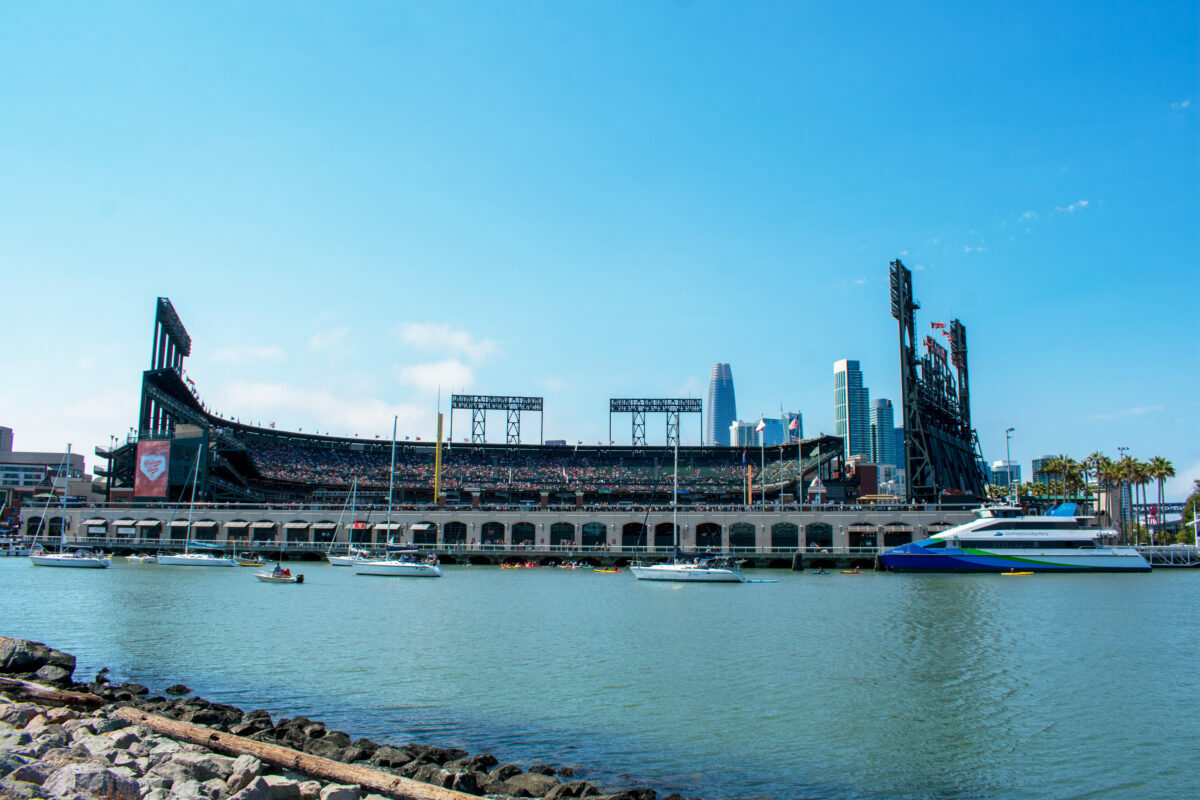 This Week in Sports Talk (TWIST) is our weekly roundup of top headlines and current news events from the past seven days in the world of pro sports, plus a preview of what’s up next. Heading into the week of October 10, 2021, these are the top 10 headlines you need to know about to understand and join the conversation this week about sports, including football, baseball and tennis news.

This week is a veritable smorgasbord of sports coverage, dear reader. There’s something for everyone. College football and the NFL are in full swing. The MLB postseason is underway. The NBA and NHL start their seasons in just two weeks. And there’s a grandpa behaving badly and schooling from Kanye to tell you about.

1. Highlights (and lowlights) of Week 4 in the NFL

As the dust settled at the end of Week 4 in the NFL, the number of undefeated teams is down to one. The Arizona Cardinals (4-0), led by adorable Kyler Murray, are now the only team sitting at 4-0. As of this posting, Murray leads the NFL in completion percentage (76.1 percent) after completing more than 75 percent of his passes for a third straight game. You go, boy!

The previously unbeaten Las Vegas Raiders (3-1) suffered their first loss of the season as they were defeated by the Los Angeles Chargers (3-1), 28-14, on Monday night.

two teams have yet to win a game this season

At the other end of the spectrum, the number of teams with zero wins at the end of Week 4 has dwindled down to two.  To the surprise and delight of New Yorkers, both the Giants (1-3) and the Jets (1-3) won last weekend. So did the Indianapolis Colts (1-3).

The two sitting at 0-4 are the Jacksonville Jaguars and the Detroit Lions. More on the Jags in a minute.

other items of note from Week 4

The great Brady-versus-Belichick face off went down in Foxboro, and the Bucs (3-1) escaped with a narrow 19-17 win over the Patriots (1-3). But for a field goal that failed, it would have gone to the Pats. Which would have been . . . really nice for those of us in Patriots Nation who are suffering silently through another season near the bottom of the heap.

So now Tom Brady has defeated every one of the 32 teams in the NFL. As expected, he has also passed Drew Brees for the NFL record for most passing yards of all-time. Congrats, TB12!

Thursday Night Football saw an NFC West matchup, as the Los Angeles Rams took on the Seattle Seahawks. The Rams scored a 26-17 victory, with another great performance from quarterback Matthew Stafford. He threw for 365 yards and a touchdown.

But the real headline for many was that Seahawks star quarterback Russell Wilson was forced out of the game in the second half. Wilson’s hand connected with the Rams’ Aaron Donald and Wilson couldn’t continue playing. The front office is now saying that he’ll be out for 6-8 weeks with an injured finger. Geno Smith has taken over as the starting quarterback and most are now saying that Seattle is out of contention for a playoff slot this season. Just like that.

The big game of the week will see the last unbeaten team take on a division rival, as the Cards play the 49’ers. Starting quarterback Jimmy Garoppolo is out with an injury, so it’ll be up to Trey Lance to deliver for the 49ers in his NFL debut.

other games, teams and players to watch in week 5

The Kansas City Chiefs haven’t had the start to the season that they hoped for, but they routed the Philadelphia Eagles last week. Tonight the Chiefs meet the Buffalo Bills in a game that will be closely watched. Could the Chiefs actually go to 2 – 3?

Joe Burrow and the Cincinnati Bengals meet the fearsome Green Bay Packers and Aaron Rodgers. Our Sports Desk is keen to see what happens when the New York Giants visit the Dallas Cowboys. And the Cleveland Browns meet the Chargers. Finally, in our little corner of the world, if New England loses to Houston, they’ll fall to 1-4. Which is a pretty deep hole from which to dig out. So we really hope that doesn’t happen.

The New York Jets and the Atlanta Falcons are playing in London this weekend – by the time you read this, the game will have already started. The Falcons’ No. 1 receiver Calvin Ridley is not making the trip. Next week, the Miami Dolphins and Jacksonville Jaguars hop across the pond for the second game in London this season. Bar owners, you’ve been warned: Urban Meyer is coming to town.

The NFL trade deadline falls on November 2 this year, the Tuesday after Week 8. So we’re right at the halfway point between the start of the season and the trade deadline. Notable names that might be in play? CBS Sports reports that trading Nick Foles would save the Chicago Bears $4 million. The San Francisco 49ers’ quarterback Jimmy Garoppolo has been ruled out the for Week 5 game against the Cardinals, so Trey Lance will make his debut. Could a team be open to a big trade for Garoppolo? The Jets’ Marcus Maye and the Lions’ Trey Flowers are also being discussed as likely trades. Stay tuned.

Meanwhile, one trade has already been executed, with New England Patriots’ cornerback Stephon Gilmore heading to the Carolina Panthers. In exchange for the former Defensive Player of the Year, the Patriots got a 2023 sixth-round pick. Most in the press feel that the Panthers got a huge win out of the deal.

Jacksonville Jaguars head coach Urban Meyer has become the butt of many jokes this week for a viral video that apparently showed him touching a local strip club dancer’s . . . butt.

The first-year NFL coach and grandfather was filmed last weekend dirty dancing with a young woman who was not his wife at an Ohio restaurant, having lost a game on Thursday night that took his team to an 0-4 record.

Some observers were upset at Meyer’s poor judgement and lack of fealty to his wife. Others (like the members of our Sports Desk) were more incensed and disgusted by the notion that a guy with an 0-4 record is out partying instead of being in the office figuring out how to win a game.

Basically, nearly everyone is contemptuous of the coach, and everyone has their own reasons. Players are openly complaining to the press. And Jaguars owner Shad Khan released a statement saying that it’s on Meyer to back earn everyone’s respect.

We could say more about this, and about how some members of society have a seemingly unlimited number of chances to fail and recover. But we’ll refrain from further comment. ‘Cause we know you know what we mean.

Texas AM Aggies celebrate after their upset win over No. 1 Alabama. Photo Credit: USA Today.

But the big headline came from the SEC. No. 1 Alabama was at unranked Texas A&M, and it was a surprising nail-biter all the way through. The Aggies led 17-7 in the second quarter, and they ultimately slayed the dragon, with a 41-38 victory over the previously unbeaten Crimson Tide. The upset sent shock waves through the world of college football, as this was the first time the No. 1 Crimson Tide have suffered a loss at the hands of an unranked team since 2007. The team snapped a 19-game winning streak.

The MLB Wild Card Games are officially in the books, and now the Division Series are underway. These are best-of-five series, so we’ll have winners within just a few days.

The Los Angeles Dodgers won the National League Wild Card Game 3-1 in dramatic fashion on Wednesday. Chris Taylor slugged a two-run walk off homer in the 9th to lift the Dodgers past the St. Louis Cardinals. The afterparty was pretty wild, with Dodgers pitcher Max Scherzer doffing his shirt and doing a shimmy-shake. Not sure, but he might have had a bit of alcohol in his system at that point.

Meanwhile, back in Gotham, the New York Mets fired Manager Luis Rojas after two losing seasons with the franchise. Despite high expectations  at the start of the season, the Mets finished with a 77-85 record.

Also in NL East, the Philadelphia Phillies fired multiple coaches after the team missed the postseason for the 10th consecutive year.

After a lot of excitement and high hopes, the New York Yankees were eliminated by the Boston Red Sox in the American League Wild Card Game on Tuesday night. Boston easily won it, 6-2. Gerrit Cole, meant to be the Yankees’ ace in the hole (literally) instead disappointed. Cole gave up two homers and three runs in just over two innings before being taken off the mound.

For those keeping score (and who isn’t?),  Boston has now eliminated New York in their last three postseason meetings. And the whole world knows: the Sox’s Wild Card Game win over Yankees was the most-watched MLB game on ESPN since 1998.

Now there’s lots of chatter about changes in the offing for the Yankees, starting with Manager Aaron Boone. Aaron Judge will be a free agent in a year – will they extend his deal?

On to the ALDS! Both first games were lopsided victories for the home team. On Thursday, the Houston Astros hosted the Chicago White Sox for Game 1; the Astros won decisively, 6-1. As of this posting the Astros are up 2-0 in the series.

Preseason play has started in the NBA, but the topic of the moment is COVID-19.

The Brooklyn Nets’ Kyrie Irving is becoming a poster child for the vaccine hold-out community. The player remains unvaccinated, at least as far are we know. Irving missed the team’s first practice in Brooklyn this week due to COVID-19 protocols. New York requires players on all sports teams to get at least one dose of the vaccine to play or practice in the team’s facilities.

According to reports, the Nets are preparing for Irving not being able to play home games. The team’s home opener is only two weeks away. Are they going to let him to go to part-time? And what happens if there’s a COVID hot spot on the team? Could he play, even on the road, at that point?  Irving could lose $381,000 per game if he cannot play due to local COVID-19 restrictions.

We don’t know about you, but something about this photo really makes us hanker for McDonald’s French fries . . . not sure why.

10. Kanye to open a basketball academy in Southern California.

Finally, while some of us are totally done with Kanye West (no, we have not forgotten that run for President), apparently West is far from being done with us. This week, several outlets reported that the music and fashion impresario is opening Donda Academy — a prep school named after his late mother, Donda West — just outside Los Angeles.

The goal is building a basketball program strong enough to rival local powerhouse Sierra Canyon. West has already inked a partnership for the school with Adidas — the brand behind West’s Yeezy sneakers. And he has already attracted three five-star prospects: Jalen Hooks, Robert Dillingham, and Jakhi Howard. Despite having no coach yet.