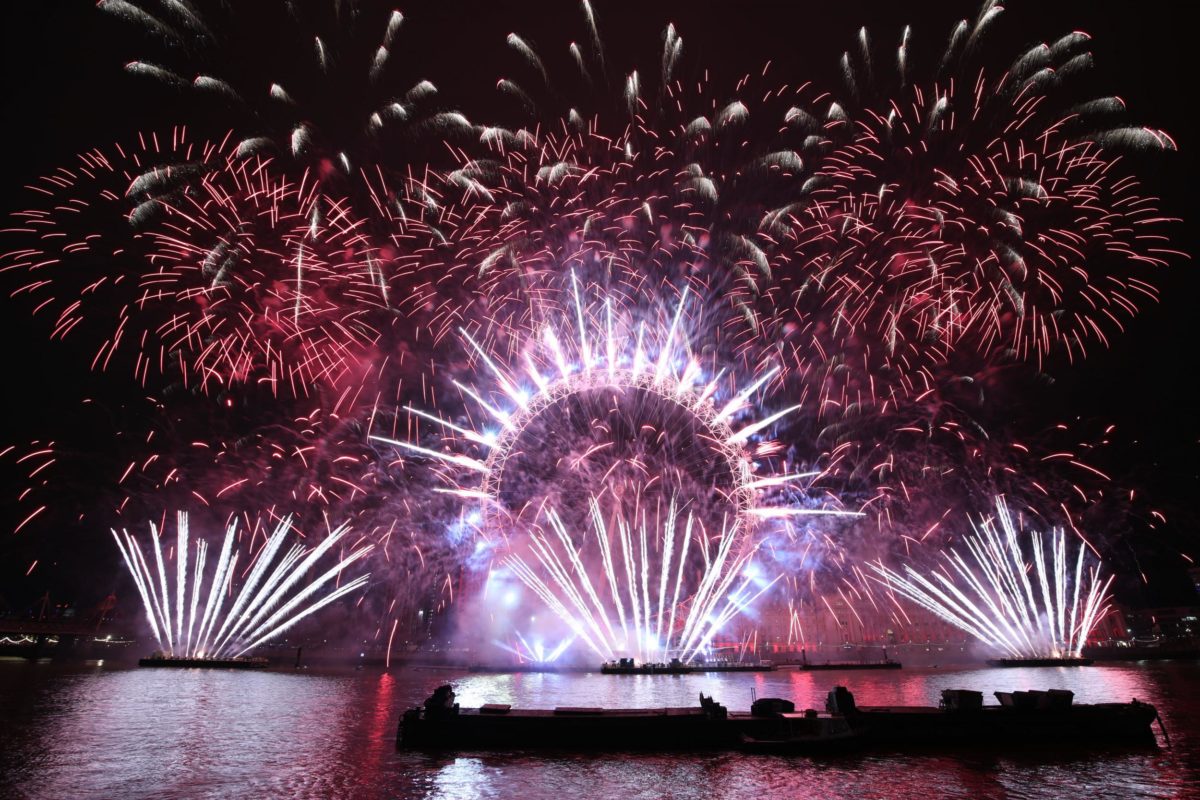 Where should you go for New Year’s Eve this year if you want to experience the celebration in high luxury style? Whether your idea of the perfect December 31 is a raucous party with fireworks and a big crowd, or a more subdued, reflective celebration, here are our top picks for the 12 best places in the world to spend New Year’s Eve 2022 in luxury.


where should you go for the perfect luxury new year’s eve?

One person’s party is another person’s pain – so the perfect New Year’s Eve location is very much in the eye of the beholder. The good news? Whether you want the full-on crazy of fireworks, free-flowing champagne and celebrity sightings, or a contemplative and spiritual experience, there’s a perfect place out there. Little kids in the mix? We’ve got you covered, too.

There are so many options, and just a few precious hours to celebrate. Here are our top picks for best places in the world to spend New Year’s Eve.

After rebuilding from the devastation from the 2017 hurricane season, St. Barth’s has reclaimed its place as the center of the universe for the luxury set on New Year’s Eve. The parties in Gustavia Harbor – whose waters will be filled with the world’s largest yachts – start mid-day and last well into the night. If you’re not sailing in on your own mega-yacht, splurge and book the Villa Rockstar at the glamorous Eden Rock. The six bedroom residence sleeps 12 and costs $15,000 per night, and includes a personal chef and butler, as well as a private pool and gym.

New Year’s Eve in St. Barth’s begins with a daytime “round-the-island” regatta, followed by house parties, yacht parties, house-then-yacht parties and ultra-lux hotel parties. People “yacht hop” before the fireworks.  Nikki Beach, La Plage and Le Yacht Club are some of the most esteemed after-midnight venues. You’ll find live entertainment and fervent partiers. In the midst of it all, you can don your 6-inch stilettos, or just come in your flip-flops. Whatever you do, just don’t be late for the tender.

what are the best poems to read on New Year’s Day?

Some prefer to view the fireworks from luxury yachts, and others from neighboring high-rises. Alternatively, motor out to Cockatoo Island and set up a moonlit picnic in preparation for the show. You can even camp or glamp there for the night, as long as you book a spot in advance. New Year’s Eve without the end-of-night battle for an Uber, complete with surge pricing? Yes, please.

You know how we feel: Paris is always a good idea. New Year’s Eve is no exception. The Penthouse Suite at one of our favorite hotels, the Four Seasons George V, runs $30,000 per night. It provides the best possible view of the midnight fireworks over the Eiffel Tower (and you can grab dinner at the hotel’s Restaurant Le Cinq beforehand for $1,300 per person). Tres bien!

Here’s the thing: very few Manhattan residents will actually be on the ground in Times Square for the dropping of the famous crystal ball. Some might be in nearby office buildings, warm and comfortable high above the crowd.

The vast majority, however, will be doing other things. Some will be running in the annual New York Roadrunners 4-mile Midnight Run in Central Park, and watching the fireworks there afterward. Some will be at concerts all over town (although the New York Philharmonic’s annual event is not happening this year due to the renovation of the hall at Lincoln Center).

Many more will be at swanky black-tie parties at their private clubs, where there’ll be a buffet of lovely food and a live band playing swing music that will transport everyone back to Old New York. Some will be at the homes of their friends on Fifth or Park Avenues. If you want to hang with them, start networking now for an invitation.

Victoria Harbor will be filled with junks, and the shoreline will be filled with people, all waiting to watch the fireworks. In our experience, the best place to be is in a high-rise – either an office building or a hotel, both Hong Kong side and Kowloon side work perfectly.

Being on the water can be the experience of a lifetime, but there is such a thing as an aquatic traffic jam, and you will definitely be in one if you decide to celebrate on a boat. We’d suggest viewing it all from your room at the Intercontinental, Ritz or at the rooftop of one of the city’s hottest hotels, The Murray.

For an elegant end to the old year, and a graceful beginning to the new, it would be hard to do better than to be in Austria. The most famous concert in the world – the Vienna Philharmonic’s New Year’s Concert – is held in the Golden Hall of Vienna’s Musikverein each year on January 1 (previews with an identical program on December 30 and 31).

All tickets for this year’s concerts have already sold out. Nevertheless, you don’t have to miss out. It’s shown on TV in 90 countries, as well as on giant video walls both at the ‘hangover breakfast’ on City Hall Square and on the square in front of the Vienna State Opera.

The Wiener Symphoniker has a variety of concerts to enjoy. There are also fireworks over the Danube, and at midnight, the ringing of the Pummerin bell in St. Stephen’s Cathedral.

Rio is usually trying to give Dubai a run for its money in terms of primacy on New Year’s Eve. Sadly, though, Reveillion (the name of Brazil’s New Year’s Eve celebration) has been called off this year again due to coronavirus. But if you want to plan for next year, the fireworks in Rio happen over Copacabana Beach, and the Copacabana Palace Hotel has dinner on a balcony where you can have a prime view. Remember, they’re just warming up for Carnival. So pace yourself.

For those seeking something more spiritual, turn your eyes to Japan. New Year’s is an important religious celebration here; many people return to their hometowns for the holiday.

Near midnight, instead of fireworks, across the country Buddhist temple bells ring 107 times before the clock strikes twelve, and once after, in a ceremony known as Joya no Kane. In Japanese Buddhism, it is believed that an individual experiences 108 worldly desires throughout life; ringing the temple bell to banish each one allows for a fresh start in the New Year.

The Watch-Night Bell in Tokyo is a particular draw (we find it wonderful that a spiritual Watch Night is also a tradition in African-American culture; many devout black people attend church on New Year’s Eve). In some temples in Tokyo, visitors can ring the bell.

It is common to send New Year’s Day postcards, and traditional foods during the holiday are osechi, a selection of dishes that keep well without refrigeration (because most stores are closed), and toshikoshi soba (buckwheat noodles). The Mandarin Oriental, the Park Hyatt, or the Aman Tokyo would all be great places to stay.

The best places for a luxury New Year’s Eve: Tokyo.

what are the best new year’s movies of all time?

The Canadian Rockies are a perfect New Year’s Eve spot for the snow bunnies who aren’t ready to come in from the cold just yet. Banff offers an outdoor family-friendly party downtown. The Fairmont Banff Springs, located in Banff National Park (a UNESCO World Heritage site), looks like a beautiful winter dream castle. There is a prix fixe dinner and a torchlight parade on the mountain, too.

Ireland’s spellbinding 19th-century castle estate, Adare Manor, is a highly civilized way to ring in the new year. It’s adorned with holiday magic. Choose between a festive celebration in The Carriage House or an Evening in the Oak Room, both with world-class dining and libations. ning décor, holiday-inspired menus, and flowing champagne.

The best places to spend New Year’s Eve in luxury: fireworks on the Thames in London.

If you’re still torn on which of these options would be best for you, then you can opt for two instead of one. PrivateFly is offering flights over the Christmas and New Year period.  It is a great way to celebrate the festive season in style – and avoid the crowds.

the best destinations for a luxury New Year’s Eve

That’s it. Our top picks for best places in the world to spend New Year’s Eve. What sounds best to you?

Personally, we prefer a quiet New Year’s Eve. We’ve found that the rest of the year tends to bring adventure enough. This year, we’ll just be with our families, outside on a snowy mountain somewhere, looking to the sky. For fireworks, for starlight, for moonlight – for any available celestial illumination to help light the path forward.