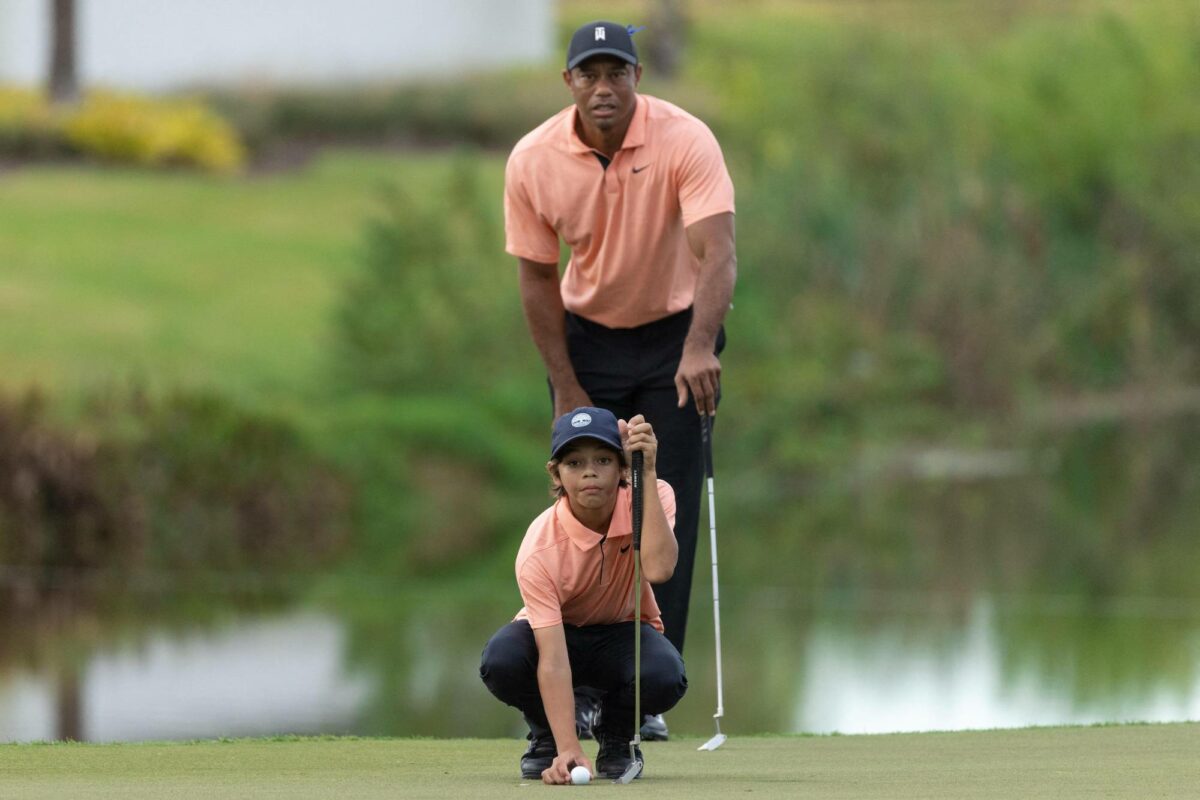 This Week in Sports Talk (TWIST) is our weekly roundup of top headlines and current news events from the past seven days in the world of pro sports, plus a preview of what’s up next. Heading into the week of December 19, 2021, here are the top 10 headlines you need to know about to understand and join the conversation this week about sports, including football, golf, hockey and basketball news.

Tiger Woods returned to professional golf for the first time since his horrific car crash 10 months ago, joining the PNC Championship family tournament in Florida with his 12- year old son, Charlie. The pair share many personal characteristics and mannerisms, which made watching them a delight for Woods’ fans.

And for those who were waiting with baited breath to find out what happened, the big pay-per-view bout between Jake Paul and Tyron Woodley went down last night in Tampa Bay. Paul prevailed over the former UFC welterweight champion, with a sixth round KO. The YouTube star improved to 5-0 (4 KOs) as a professional boxer. Immediately afterward, he began taunting UK boxer Tommy Fury — the half-brother of heavyweight champion Tyson Fury – who was supposed to be his opponent in this match. Fury withdrew a couple of weeks ago with no real explanation.

1. Highlights (and lowlights) of Week 14 in the NFL

On Sunday, the Tampa Bay Buccaneers (10-3) beat the Buffalo Bills (7-6), 33-27. And Bucs’ quarterback Tom Brady set some new NFL records. You know, like he does every week. In this game, Brady broke the NFL completions record and threw his 700th career touchdown pass. That famous touchdown pass also ended up clinching the win for the Bucs in overtime.

The Dallas Cowboys (9-4) jumped out to a 21-0 lead in Washington and then hung on for a 27-20 win, extending their NFC East lead to three games. Micah Parsons continued his Defensive Rookie of the Year-worthy (perhaps even Defensive Player of the Year-worthy) season.

The Baltimore Ravens‘ (8-5) season has been an endless grind of overcoming injury after injury. And the latest one is pretty tough. Lamar Jackson suffered an ankle injury in the second quarter of Sunday’s 24-22 loss to the Cleveland Browns (7-6). Baltimore’s next three games are going to be challenging: first they play the Packers, then the Bengals and then the Rams. Bottom line: the quest for the AFC North title has become even more competitive.

The LA Rams (9-4) have made significant investments in their roster this season, and in Monday Night Football those bets paid off. Los Angeles picked up its best win of the season, defeating the Arizona Cardinals (10-3), 30-23. And they did it without Jalen Ramsey and several other key players who were placed on the reserve/COVID-19 list.

Rams’ quarterback Matt Stafford threw three touchdowns with no interceptions. Cooper Kupp made 13 catches for 123 yards and a score. And our pal Odell Beckham Jr. (OBJ) caught a touchdown for the third straight game. CBS Sports reports that it’s his longest streak since 2015.

The loss prevented Arizona from clinching a playoff spot, and tightened up the NFC playoff race.

The New York Giants (4-9) clinched their fifth straight losing season with a loss on Sunday. CBS Sports reports that the last time that happened was 1973-1980, when the team had eight straight campaigns under .500.

Jacksonville Jaguars (2-11) head coach Urban Meyer and team owner Shad Khan have parted ways after Sunday’s loss to the Tennessee Titans. Controversy had been swirling about Meyer’s leadership and coaching style even before the season started. The final straw that seemed to lead to his ouster, though, was that former Jaguars kicker Josh Lambo told the Tampa Bay Times that Meyer kicked him during warmups in a preseason practice. The press had already reported on several recent incidents in which the coach allegedly insulted staff and players and had serious arguments with several of them.

Regular readers of this column will recall that in October, Meyer was caught on camera groping a woman (not his wife) at a restaurant in Ohio. Meyer had stayed in the area after a Jaguars’ loss to the Cincinnati Bengals. Previously, Meyer hired Chris Doyle, a former coach at Iowa who was put on administrative leave after multiple Black players alleged he treated them poorly because of their race. Doyle had to resign just hours after his hire was announced. There’s more on Meyer’s greatest hits list during his time with the Jags, but enough said. Jaguars offensive coordinator Darrell Bevell will take over as the interim head coach for the remainder of the 2021 season.

Thursday Night Football turned into a thriller in Week 15, as the Kansas City Chiefs (10-4) came away with a 34-28 overtime win over the Los Angeles Chargers (8-6). The play of the game was a 34-yard game-winning touchdown catch from tight end Travis Kelce. Los Angeles was up 28-21 with 1:48 left in the game, so it was a particularly heartbreaking loss for Chargers fans.

Yesterday saw a Saturday NFL game, and for those of us who are members of Patriots Nation, we kind of wish it never happened. The New England Patriots (9-5) fell to the Indianapolis Colts (8-6), 17-27. Ugh!

“Wide open” are the words everyone is using to describe the state of play of the NFL playoffs right now. CBS Sports reports that it’s the first time since 2014 that every team has at least three losses through Week 14. No one has officially clinched a playoff spot yet. In fact, as of Thursday morning, 26 teams were within one game of a playoff spot.

The Steelers will try to keep their playoff hopes alive as the Titans visit.

As NFL.com notes, with a one-game lead in the AFC North, every remaining contest is crucial for the Ravens. It appears they’ll be missing their superstar quarterback in this afternoon’s game. If Lamar Jackson is not cleared to play after an ankle sprain during last week’s game, Tyler Huntley is likely to start.

The NFC South rivals face off in a game that will have real impact on the playoff picture only if the Saints pull off an upset.

Kyrie Irving hasn’t played this season and remains unvaccinated, but earlier this week, the Brooklyn Nets reversed position and announced that he would be a part-time player, and only be on the court for away games, since he is unwilling to meet the New York State requirement that he be vaccinated.

Shortly after the announcement, though, fate took a hand. The omicron variant is roaring through New York City, and Irving ended up on the coronavirus protocol list. Along with teammates Kevin Durant and James Harden. So he still hasn’t played a single game this season.

As of this posting, the Nets still sit atop the Eastern Conference, with a 21-9 record. The Bulls and the Cavaliers are second and third, respectively.

He did it! Steph Curry broke the record on Tuesday night at Madison Square Garden, shooting his 2,974th career regular-season three-pointer. And breaking Ray Allen’s NBA record. Both Allen and Reggie Miller (who had the record before Allen) were in attendance, as was Curry’s father. It was a touching moment in a brilliant career, marking Curry as perhaps the greatest NBA shooter of all time. Several of the other Greats took notice: LeBron James, Tom Brady and others in the sports world showered Curry with kudos on social media. The Warriors went on to defeat the Knicks, 105-96.

On the other end of the spectrum, it has been a horrible season for New Orleans Pelicans star Zion Williamson. He hasn’t been able to play all season due to his recovery from surgery on his fractured right foot. It hasn’t healed properly, and on Thursday, the team announced that Williamson will be reevaluated in 4-6 weeks after receiving a new injection. Ugh.

To end this week’s NBA update on a more positive note, the Utah Jazz continue to dazzle. As of this posting, they have a 20-9 record and are in third place in the West.

In the NFL, 75 players ended up placed on the COVID list on Monday and Tuesday alone, and as of this posting, over 100 players remain on the protocol. Some teams found that entire position groups had been compromised by COVID – which happened to some teams last season. The Rams, Browns and Washington have been particularly hard hit. Cleveland Browns head coach Kevin Stefanski tested positive, as did quarterback Baker Mayfield and 19 other players. The Rams have 25 players out due to the coronavirus protocols.

On Friday, the NFL postponed Saturday’s scheduled game between the Cleveland Browns and Las Vegas Raiders to Monday. Sunday’s Washington-Eagles and Seahawks-Rams games have been postponed as well and both will kick off on Tuesday. All three moves were chalked up to coronavirus concerns and issues.

The NBA and NHL have also postponed several games in the past few days, and the talk of the sports world is what to do to keep the new coronavirus variant from tanking the seasons of several professional leagues. Stay tuned.

This week saw the fifth year of the early signing period for NCAA college football taking place in December. As a result, the hype generally reserved for February’s traditional National Signing Day has shifted a few months earlier. Wednesday was Early Signing Day – and the hype was right on target.

Travis Hunter is a cornerback from Georgia ranked as the No. 1 player in the 2022 recruiting class, and for months it had been assumed Hunter would end up at Florida State. In a surprise for almost everyone, though, he signed with Jackson State. Jackson State is a Historically Black College or University (HBCU).

The football team is coached by Pro Football Hall of Famer and former Florida State Seminole Deion Sanders. Both the coach and Hunter spoke eloquently about the importance of preserving the greatness of HBCUs, which were the launch pads for many Black NFL players in years past. Some sports writers declared this shocking move a possible sea-change in college football recruiting, even asking: “Why can’t HBCU football get the attention and television rights deals it has long deserved?” Good question.

other college football moves of note

College quarterback Spencer Rattler announced he’s transferring from Oklahoma to South Carolina, where former Oklahoma assistant Shane Beamer is the head coach. A Heisman Trophy favorite at the beginning of the season, Rattler had a disappointing season. This is a chance to hit the re-set button, and it might be his path back to the ranks of top-tier college quarterbacks.

Quinn Ewers — the top overall recruit in the 2021 class and “one of the all-time highest-rated quarterback recruits” — is transferring to Texas from Ohio State. The Longhorns also got a commitment from five-star Kelvin Banks, the long-time Oregon pledge. Texas took advantage of the departure of Oregon head coach Mario Cristobal, who’s headed to Miami.

That’s our take on the news headlines today and the previews of the week ahead that you need to know to understand and join the talk about sports – including football, basketball and hockey.

It’s almost Christmas, and like many of you, we here at Dandelion Chandelier are segueing into vacation mode. We’ll be officially OOO until the New Year – we’ll be back on January 9th. In the meantime, we’re wishing you and yours a wonderful year-end break, a Merry Christmas, a Happy Kwanzaa, joy and peace, and a Happy New Year. Go Pats! Stay well – see you soon.