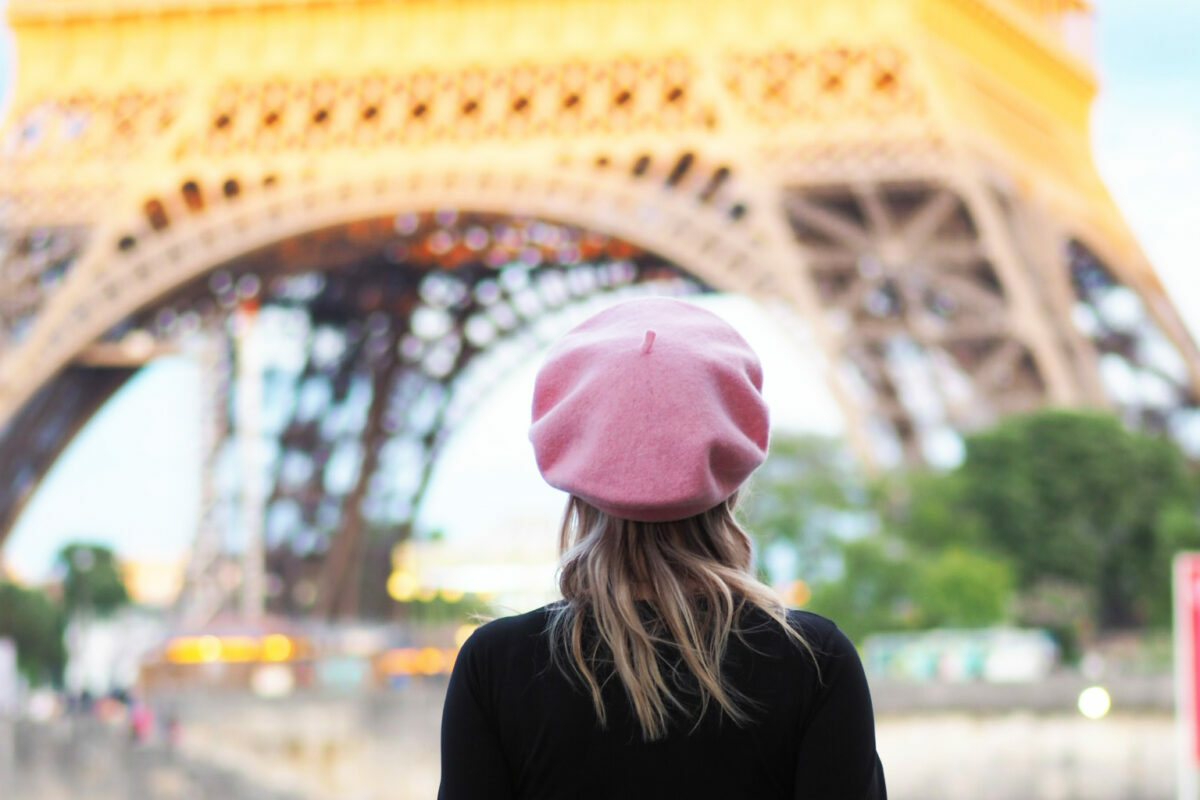 Two years into the global coronavirus pandemic and the resulting travel restrictions, we’re  really missing visiting Paris – and some of our other favorite places in France. Since we can’t get there for real at the moment, we’ll settle for a cinematic journey instead. Our correspondent and resident cineaste Abbie Martin Greenbaum has curated a list of the 12 best movies set in Paris or France for a virtual vacation trip or a home movie marathon.

Dreaming of a virtual vacation in Paris or France?

As the interminable Great Lockdown of 2020-21 ebbs and flows and never seems to end, you may be fantasizing about a way to escape from home. We sympathize. After sheltering in place for so many months, nothing seems more appealing than a luxury vacation – especially one that will conveniently help us speed through the enforced time off the road.

What are the best movies set in Paris or France for a virtual vacation trip or film festival at home?

And since travel is mostly still a non-starter, we’ve devised another way to satisfy your wanderlust: a virtual trip to your favorite travel destination via cinema.

Yep, that’s right! We’re sending you and your laptop on your very own getaway. And guess where you’re going? France.

Take a virtual vacation or host a home film festival with the 12 best movies set in Paris or France.

All the way from the City of Lights to the bucolic beauty of Provence, these twelve movies will add up to something almost as amazing as an actual visit. We have both classic and contemporary films, low-stress Paris love letters and high-brow serious cinema – and somewhere in the middle of all of these, you’ll begin to feel like you’re really there.

The best movies set Paris or France for a virtual vacation trip.

Set in Montmartre, Amélie follows the whimsical and quirky eponymous heroine (played by Audrey Tautou), a quiet and slightly odd waitress in the Café des Deux Moulins. Upon finding a box of trinkets hidden decades prior in her apartment by a small boy, she decides to return it to him. It brings her such a jolt of happiness that she embarks on a journey to make the lives of those around her more interesting and exciting. Including her father, her reclusive neighbor, a coworker, an abused shop boy and more. It’s a love letter to Paris and also to romance and generosity conquering all.

Take a virtual vacation or host a home film festival with the 12 best movies set in Paris or France.

It’s as if Paris Je t’aime was made for this imaginary excursion. Twenty-two of our favorite filmmakers collaborate to make a one-of-a-kind movie experience – an anthology of short films, each one set in a different Parisian neighborhood.

What to watch as best movies set Paris or France for a virtual vacation trip: Paris Je t’aime. Courtesy Photo.

Allow directors like Gus Van Sant and Gurinder Chadha to take you on a whirlwind tour of the city, and before you’re done, you’ll have experienced pockets of life all over Paris.

When we think of Paris, the first thing that comes to mind, of course, is love. And that’s why we simply must recommend the second installment in Richard Linklater’s epic Before trilogy – a love story that spans (and was filmed!) over three decades.

The best movies set Paris or France for a virtual vacation trip: Before Sunset. Courtesy Photo.

Nine years after their initial meeting, Jesse and Céline at last reunite in Paris. The movie is a real-time jaunt through Paris, and manages to convey that the city is a feeling – of melancholy, of magic, and of romance –  as much as it is a place.

4. An American In Paris

While we’re living in fantasy, we may as well invest in a little time travel. And if we’ve gotten you in the mood for French love stories, it doesn’t get better than the ultimate classic.

The best movies to watch for a France movie marathon: An American in Paradise. Courtesy Photo.

Gene Kelly and Leslie Caron star in the movie adaptation of the George Gershwin musical, all about an American painter who falls in love with an unavailable French woman. Watch for the perfect vicarious romance.

5. My Father’s Glory and My Mother’s Castle

This pair of films set at the turn of the 20th century are here to deliver you to the idyllic vacation in the south of France.

What to watch for a virtual trip to France: My Father’s Glory and My Mother’s Castle. Courtesy Photo.

Join young Marcel and his family as they leave Marseilles for Provence, ready for a summer of adventures in the French countryside. Both are sweet, slice of life films about the joys of growing up, and both make for an easy watch to fulfill your travel bug.

The Best Chic Luxury Items Available Only in France

As well as enjoying your time as a virtual tourist, of course you’re going to want to do some things that the locals would do. And that means absorbing French culture, which happens to famously include some of the best cinema in the world. Watch the next few on the list to enrich your understanding of life in France – and start with The 400 Blows.

The best movies to watch for a France movie marathon: The 400 Blows. Courtesy Photo.

One of the best-known films from icon François Truffaut, this is among the most significant features of the French new wave. Follow the story of troubled young Antoine, as he is thrown from one difficulty to another, in a film that is still considered one of the best French films ever made.

Along with Truffaut, New Wave director Jean Luc-Godard helped to forever change the landscape of cinema – and Breathless remains his most legendary work.

What to watch for a virtual trip to France: Breathless. Courtesy Photo.

In a film that forced audiences to reimagine the art of film itself, Breathless follows the travels of criminal Michel as he attaches himself to a young American student. Press play for a crash course in film history, and to immerse yourself more deeply in French culture.

More than fifty years have passed since The 400 Blows and Breathless, and France is still a place to look for so much of the world’s best filmmaking.

The best movies to watch for a France movie marathon: Girlhood. Courtesy Photo.

Céline Sciamma’s Girlhood is a contemporary masterpiece, showing the complicated friendship dynamics between a group of girls living in the Paris banlieue.

And perhaps the most recent example of an awe-inspiring French film is Ladj Ly’s Oscar-nominated picture – and no, it’s not an adaptation of the Victor Hugo novel, though you will be able to find some connections between the two.

What to watch for a virtual trip to France: Les Miserables. Courtesy Photo.

Ly depicts a brutal portrait of police brutality, poverty, and racism in today’s France, based on a series of 2018 events. Further proof that France is still the place to watch for exceptional cinema.

After watching all of these examples of the best French movies, perhaps you want a visit with the man who started it all. You may remember Martin Scorsese’s 2011 film, all about a young boy, an automaton, and filmmaking’s godfather – Georges Méliès – himself.

What to watch for a virtual trip to France: Hugo. Courtesy Photo.

An all-star cast brings this enchanted story to life. Its imbued from start to finish with all the sparkle you can expect to find in Paris.

The Ultimate Luxury Gift Guide: The Best From France

Sometimes, there is something to be gained from an interpretation of a city – rather than visuals of the actual place.

The best movies set Paris or France: A Cat in Paris. Courtesy Photo.

And that is our reason for including A Cat in Paris, a short and surprisingly suspenseful animated picture. It follows a cat, a burglar, and a young girl who has recently lost her father. If you need a crowd-pleasing film that just about anyone can enjoy, this is the one to watch.

And last but not least, Cléo from 5 to 7. Another astonishing work of French cinema, the Agnès Varda classic is an hour–and–a–half account of a woman who is waiting to hear back about a cancer diagnosis.

The best movies set Paris or France: Cleo from 5 to 7. Courtesy Photo.

Only Varda could create a film that unfolds in real time, managing to fully explore a character’s existential crisis. While also portraying an unforgettable glimpse of Paris.

The best movies to watch set in Paris or France

That’s our take on the 12 best movies set Paris or France, perfect for a virtual vacation movie marathon or film festival until we can actually travel again. Which one is your favorite, dear reader? Did we miss any excellent ones that we should add to our list?

Abbie Martin Greenbaum grew up in New York City and currently lives in Brooklyn. Where she drinks a lot of coffee and matches roommates together for a living. At Oberlin College, she studied English and Cinema, which are still two of her favorite things. Along with dessert and musical theater. She believes in magic.