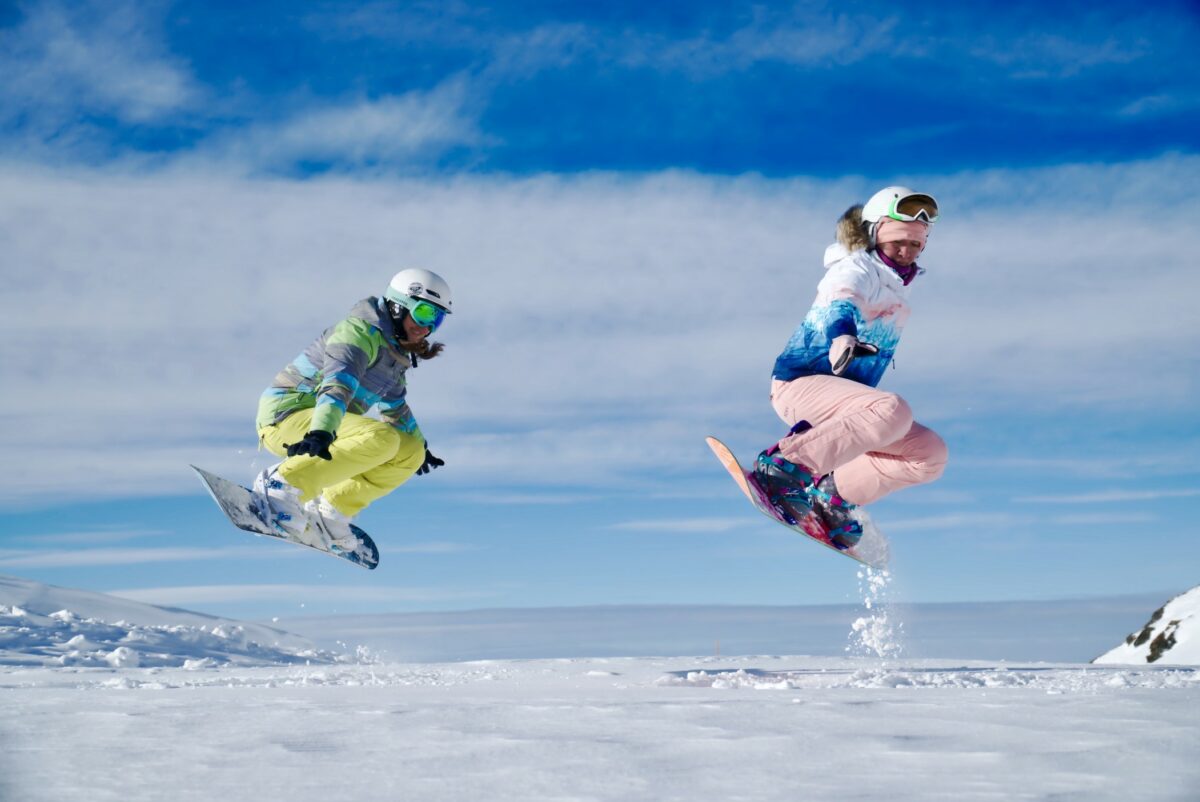 Lots of people ask about the best places for a ski vacation in America or in Europe, and we’ve shared our insider’s guides on both of those pressing matters. But what are the best places for a luxury snowboarding vacation? You know, places with great terrain parks, monster half-pipes, a chill vibe and respect (not resentment) for the sport. Our intrepid correspondent and long-time snowboarder Lindsey Graham shares her research on the 12 best places in the world to find luxury snowboarding resorts. Ready to ride?

where are the best places to snowboard in the world?

For Team Snow, this is the best time of the year: snow sports season! There are lots of reference points for the best luxury ski mountains and resorts (we’ve got some thoughts on that, actually). But what about those who live for snowboarding?

ski or ride? Or both?

There’s long been tension between those who ski and those who ride. We’re a mixed family, where half do one and half do the other, and somehow over the years, we’ve learned to coexist.

The 12 Best Snowboarding Luxury Resorts in the World

So when it’s time to pick a spot for a family winter vacation, we have to find places where both the skiers and the snowboarders will be happy.

what makes for a great luxury snowboarding resort?

For those who don’t ride, by the way, here are the things that make for a great snowboarding resort. Lots of terrain parks! An epic half-pipe or two. A chill vibe, where the skiers aren’t just tolerating the snowboarders – a place where they’re totally fine with us being there. And plenty of wide trails so no one gets in anyone else’s way and runs are not an obstacle course.

The best luxury snowboarding resorts and terrain parks in the world.

With those criteria, plus all the usual “luxury” amenities (great places to stay, good food, fun activities off the mountain), here are our top picks for the best places in the world for a snowboarding vacation.

The 12 Best Luxury Snowboarding Resorts in the World right now

Considered the best of the best, snowboarders come from all over the world to ride at the Verbier Ski Resort. The resort has some of the best terrain for the most advanced riders, and it is known to have hosted numerous ski and snowboard competitions such as the finale of the Freeride World Tour Competition in 2014.

The best luxury snowboarding resorts in the world: Verbier, Switzerland.

While there is only one terrain park, the majority of people travel there for the diverse and extensive number of runs available. In addition to night boarding, the resort offers heliboarding in which snowboarders can fly to the most remote slopes via helicopter. Diana Ross, Prince Harry, the Belgian and Swedish royal families, and many more prominent figures are known to travel to Verbier during the holiday season. A trip here is known to be terribly expensive, but it’s arguably worth every penny.

Mount Baker was one of the earliest resorts to welcome snowboarders. Many resorts didn’t start allowing snowboarders to use their mountains until a couple decades ago because they were viewed as a threat to skiers and the slopes.

There is no terrain park here, but snowboarders love Mount Baker because of its awesome tree runs and off-piste opportunities. A cool fun fact is that the resort gets the most snow per year on average than any other resort in the world. Mount Baker also hosts the Legendary Banked Slalom competition every year, which snowboarders come from all over the world to compete in.

The Tignes Resort welcomed snowboarders years before other French resorts did. It is a popular place because one can snowboard there during eleven months out of the year.

The best places to snowboard in the world: Tignes, France.

The only time the resort is closed is from mid-May to mid-June. After which the resort opens up the Grande Motte Glacier for summer snowboarding, where there is lots of space for free riding as well as a world class terrain park. Tignes serves as the host of multiple national and international ski and snowboard events, as well as the training ground for many snowboard teams.

to ski or snowboard? how to find the right snow sport for you

The Sankt Anton am Arlberg Resort (aka St. Anton) in Austria is not a good place for beginners because most of the resort’s trails are quite steep. But there are a few areas towards the base of the ski area that are suitable for less advanced riders. The good news is that if your skills are moderate or better, there are many very long and wide trails that attract tons of snowboarders who love freeriding.

The best places to snowboard in the world: St. Anton, Austria.

In addition, St. Anton harbors natural rugged terrain, offering snowboarders many chances to have fun in the trees or off-piste. There are so many different options for runs that crowds are rarely an issue; snowboarders love this because one of their biggest pet peeves is being surrounded by or stuck behind meandering skiers. Some people consider the resort, and the village of St. Anton to be pretentious and harbor a certain air of elitism. Nonetheless, it is beautiful and has a number of little shops, cafés, and sporting facilities to explore when you aren’t skiing or snowboarding.

Snowboarders refer to Mammoth Mountain as “the mecca” of California. It is home to eleven terrain parks of varying difficulty as well as a twelve-foot halfpipe!

Mammoth refers both to the sheer size of the mountain, as well as the amount of time this resort is able to stay open, from November to June. Because this area of the country gets so much sun, approximately 300 days per year, boarders are known to hang out and drink beer from the local Mammoth Brewing Co. in the late afternoon after they are done riding.

This place is really family-friendly; across its one hundred eighty-seven trails, there are choices for every skill level. Breckenridge is also cool because many of its trails are named after local people or events from early in the resort’s history, something many resorts do not do.

why do people love to ski and snowboard?

Davos Klosters Resort encompasses five mountains with many wide trails that get consistent snow throughout the winter. This yields endless powder days—dream conditions for a snowboarder!

The best places in the world to snowboard: Davos Klosters.

In addition to having lots of space for free riding and tree riding, Davos Klosters has two half-pipes and multiple parks for freestyling. The resort is so big that it is hard to run out of new areas and slopes to have fun on!

The village of Vail resembles a Swiss alpine village, with cobblestone streets, beautiful views, and lots of shops. It is located at the base of Vail Mountain Resort, a place beloved by snowboarders.

The best places in the world to snowboard

Vail certainly makes them feel welcome. The resort has a huge terrain park with twelve runs and three half-pipes. At the bottom of the park there are TV screens and vending machines. And music is sure to be blasting while boarders rest up. Snowboarders at Vail are also sure to take advantage of Vail’s backcountry, tree, and cliff runs all of which are fairly accessible by different lifts.

Whistler Blackcomb is the largest ski resort in North America and one of the largest in the world! Across the two mountains, there are five diverse terrain parks, each with their own difficulty level and set of features (jumps, rails, boxes, etc.).

There are also two half-pipes, one of which is a twenty-two foot Olympic sized pipe. The other is a mere fifteen footer. It is fairly easy to maneuver to and from Whistler or Blackcomb: a brief, scenic gondola ride is the only necessary step.

light up the slopes with the best luxury ski wear 2021

Åre Resort in Sweden is comprised of four main areas: Bjornen, Åre, Duved, and Tegefjall. Åre, the central area of the resort, gets the most traffic because of the variety of runs as well as its popular cafés. This is the area where the freestyle and half-pipe parks are.

This resort is a great place for beginner snowboarders. Bjornen is specifically designed to help beginners build their skills and there is much less traffic than in other areas of the resort. When one isn’t on the slopes, the best hotel to stay in is the Copperhill Mountain Lodge, one of the best five-star hotels and resorts in all of Sweden. The Copperhill has a traditional ski lodge feel, with rooms that provide beautiful views of the surrounding mountains. It even has a lift that goes directly to the Åre ski area.

The Jackson Hole Mountain Resort appeals to advanced snowboarders who like backcountry riding. It is a place where there is a lot of freedom to explore. Although that means that the terrain is often quite rugged and steep. A nice option the resort offers is guided tours of the terrain just to ensure that individuals or groups don’t get lost or in over their heads trying to take on a new challenge.

Jackson Hole has a terrain park made up of all-natural features. There is also a man-made park that has a long half pipe and various jumps. One of the resort’s popular attractions is Corbett’s Couloir, a run that begins with a massive vertical drop into a narrow funnel shaped gully. It can only be reached by a tram that drops people at the top of the run every ten minutes. In the next town over, Teton, there is a smaller and easier resort called Snow King that is better suited to beginners.

Made up of four resorts, Niseko United is the best-known place for snowboarding in Japan. These four resorts are all located on one mountain: Niseko Annupuri.

The best places in the world to snowboard: Niseko, Japan.

The resort’s claim-to-fame is the amount of fresh snow that it gets; there is often waist deep powder for snowboarders to plow through. Across the four resorts, there is everything a snowboarder could want from parks to pipes to endless space for freeriding. Niseko United is popular among foreigners from all over the world, but in recent years a large percent of their foreign visitors have been Australian!

What are the Best Luxury Snowboarding Resorts in the world right now?

That’s our take on the best resorts and other places in the world for a luxury snowboarding vacation, with terrain parks, half-pipes and lots of trails to snowboard. What do you say, dear reader? Where’s your favorite place to ride?