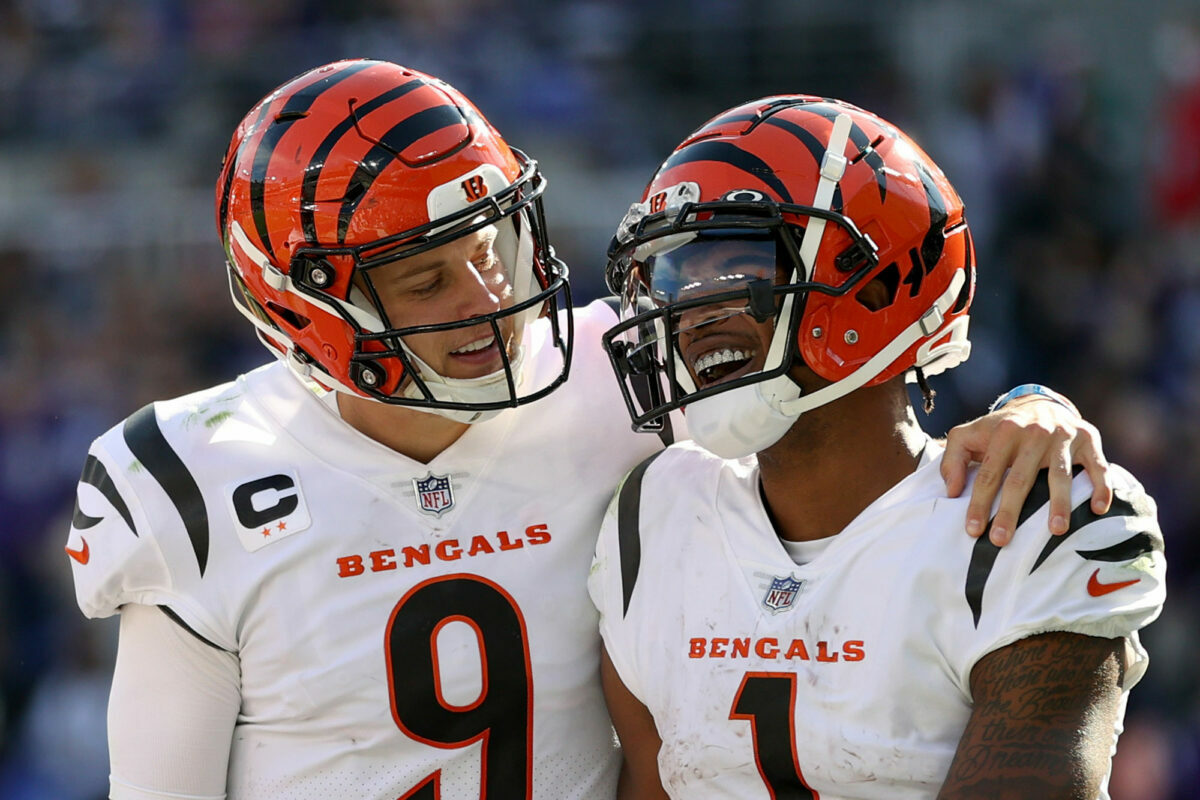 The NFL added a week to its schedule for the first time this season, and for some teams it turned out to be a case of saving the best for last. There were three playoff slots open a week ago. Each got filled in thrilling fashion.

The Pittsburgh Steelers won in overtime, 16-13, over the Baltimore Ravens. And since the Chargers-Raiders game didn’t end in a tie, they advance to the playoffs. Giving their quarterback Ben Roethlisberger at least one more game before his rumored retirement.

The San Francisco 49ers fell behind 17-0 to the LA Rams late in the first half of their Sunday game. But they fought back and scored a 27-24 overtime victory and a playoff spot. CBS Sports notes that this was San Francisco’s largest comeback win since 2011.

Both of those games were nail-biters. But the last game of the season – the Las Vegas Raiders versus the LA Chargers – was truly epic. The Raiders led 29-14, with under five minutes to go. But at the fourth down, Chargers quarterback Justin Herbert exploded, tossing two touchdowns and a two-point conversion to tie the game.

This weekend was a big one for NFL fans, with two AFC games already in the books. The third one is today. The NFC has 2 games today and for the first time, there will be a playoff game on Monday Night Football.

With their 28-25 win over the Texans last Sunday, the Tennessee Titans are the No. 1 seed in the AFC. That gives them a bye (a week off), and gives their injured quarterback Derrick Henry better odds at taking the field next weekend.

In a shocking twist, the Indianapolis Colts lost last Sunday, 26-11, to the hapless Jacksonville Jaguars. The Colts had been considered a lock for the playoffs just two weeks ago and this loss knocked them out of the postseason. Their quarterback Carson Wentz is being blamed for the disastrous loss. He was sacked 6 times in this game, having lost the week before to the Raiders. A win in either game would have seen the Colts in the playoffs.

Yesterday, the No. 5 Las Vegas Raiders played the No. 4 Cincinnati Bengals, and the Bengals won, 26-19. For the first tine in 31 years, they advance in the postseason. We were touched by the power of the partnership between quarterback Joe Burrow and rookie wideout Ja’Marr Chase. They played together in college for two years and their rapport has been a significant benefit for the team this year.

Also yesterday, the No. 6 New England Patriots braved frigid temperatures to play the No. 3 Buffalo Bills. The Bills thumped the Pats decisively, 47-17. As Pats fans, we’re disappointed. But the Bills really earned this.

Later today, the No. 7 Pittsburgh Steelers are at the No. 2 Kansas City Chiefs.

The Green Bay Packers are the No. 1 seed in NFC, so Aaron Rogers gets the day off.

Two NFC playoff matchups are today, with the final one tomorrow night:

For most NFL teams, the season is over. And the head office changes are well underway. David Culley is out as the Houston Texans’ head coach. Joe Judge has been fired by the New York Giants (the team went 10-23 and scored the fewest points in the NFL during his 2-year tenure). In total, eight teams are looking for a head coach this offseason. The other 6 are the Dolphins, Bears, Vikings, Raiders, Jaguars and Broncos.

The Minnesota Vikings actually have vacancies for both a head coach and a general manager. This week it was reported that they have requested an interview for the GM role with Philadelphia Eagles’ Catherine Raiche, currently the highest-ranking female staffer in the NFL,  If true, it would make her the first woman to be seriously considered for a GM role in the league.

The Georgia Bulldogs pulled off a surprise and beat Alabama 33-18 on Monday night to take home the College Football Playoff title. Their quarterback, Stetson Bennett, has a truly incredible life story that would bring almost anyone to tears. Like something out of a Hollywood film, actually. You can read all about it here.

Bennett’s opposing quarterback, Bryce Young, won the 2021 Heisman. But in the clutch, Bennett was the one who prevailed. Alabama was ahead 18-13 with 10 minutes left to go. But both the defense and the offense fell apart, allowing Georgia to outscore them 20-9 in the fourth quarter.

Georgia won the national title for the first time in 41 years, making this  team’s incredible season one for the ages. And substantially improving the NFL Draft prospects for Bennett.

The Chicago Bulls remain at the top of the standings in the East. But all the buzz is about the Brooklyn Nets, who are only half a game back as of this posting.

On Wednesday, the Nets arrived in Chicago and beat their conference rivals, 138-112. Kevin Durant scored 27 points. It was his 12th straight game with at least 25 points, tying his own franchise record. James Harden scored 25 points. Kyrie Irving can play in away games only, due to his vaccination status, and he made his presence felt even though he played for only a short time.

The Nets are the focus of lots of chatter, including from other NBA teams. This week, the head coach of the Portland Trail Blazers proclaimed the Nets’ Kyrie Irving the best point guard ever in NBA history. Once the superstar trio of Durant, Harden and Irving are playing in complete harmony, the consensus is that they’ll be unstoppable.

Meanwhile, also in the East, the Philadelphia 76ers’ Joel Embiid had his seventh straight 30-point game, tying the franchise record.

Four weeks before the NBA trade deadline, the Hawks announced that they have traded Cam Reddish to the New York Knicks. In return, Atlanta will receive Kevin Knox, Solomon Hill, a protected 2022 draft pick and a 2025 second-round pick.

In the West, the Phoenix Suns and the Golden State Warriors continue to battle for first place. As of this posting, the Suns lead by a game and a half.

In great news for Warriors fans, last Sunday for the first time since June 2019, Klay Thompson was back. After recovering from a torn ACL and a ruptured Achilles, he got a hero’s welcome. Then he went on to score 17 points in his first 20 minutes of play, as the Warriors beat the Cleveland Cavaliers, 96-82.

In tough news for the Portland Trail Blazers, dreamy Damian Lillard must undergo abdominal surgery. As a result, he’ll miss six to eight weeks of the season. He hasn’t played since New Year’s Eve, and has missed 11 games this season overall. That’s highly unusual, as he was previously one of the sturdiest of the NBA stars. The Blazers have been in the playoffs for eight straight seasons – this time their prospects are looking dim. And the chatter about the team trading Lillard and starting fresh with a rebuild effort are getting louder.

It’s the last year on the Baseball Hall of Fame ballot for Barry Bonds, Roger Clemens, Curt Schilling and Sammy Sosa. CBS Sports reports that all four seem to be on pace to come up short of the required 75% of the vote to be inducted. However, they may get in through a back door: the Today’s Game Committee consists of 16 retired players, managers and umpires. It takes 12 votes to enter the Hall via this path – and that seems eminently doable for at least three of these four.

March Madness is still weeks away, but here’s a bit of news from men’s college hoops. There are no undefeated teams left in men’s college basketball after both No. 5 USC and No. 1 Baylor fell this week. The Bears had been on 21-game winning streak – the longest in the country. But No. 19 Texas Tech rallied from being behind by 15 points and won 65-62 on Tuesday night.

Finally, this week we note another example of the mashup of high fashion and pro sports. Los Angeles Angels two-way phenom – pitcher and slugger and reigning MVP – Shohei “Baby Ruth” Ohtani is the February cover star of GQ magazine. He’s sporting a $1,200 Gucci vest, and looking every inch the superstar. You go, boy!

That’s our take on the big sports news headlines and major events, and a preview of the week ahead including what to know about football, basketball, tennis and hockey. Stay well and safe, see you next week.

Pamela Thomas-Graham is the Founder & CEO of Dandelion Chandelier. A Detroit native, she has 3 Harvard degrees and has written 3 mystery novels. After serving as a senior corporate executive, CEO of CNBC and partner at McKinsey, she now serves on the boards of several tech companies. She’s all in with the Pats, the Warriors, the Red Sox and the Wolverines. Also Naomi and Coco. And Roger. She would like to thank her advisors on the Sports Desk, without whom this column would not be possible.