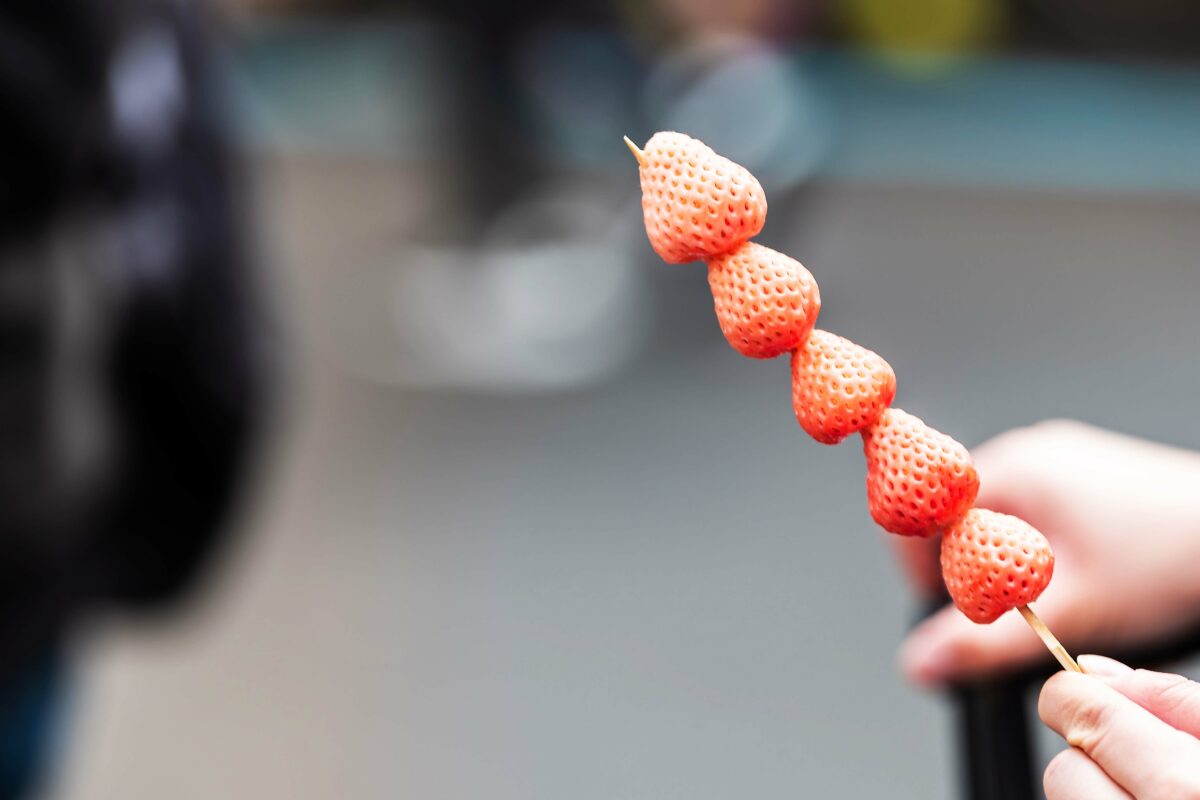 Lots of people say that they prefer luxurious experiences to a more traditional luxury purchase, like designer fashion. So, where does eating $50 strawberries fit into that mix? There’s a long tradition of giving highly cultivated and shockingly expensive fruit as a luxury gift in Japan. Now, thanks to a company called Oishii Berry, the pricey haute couture produce trend has arrived in America from Japan, with the launch of the “Tesla of strawberries.” They run just over $6 each. How much would you pay for a strawberry, dear reader, if it was really, really good? We’re thinking that this is a dazzling romantic gift idea. ‘Cause nothing says “I love you” like expensive produce.

expensive luxury fruit is a traditional gift in Japan

From square watermelons to white strawberries to deep red mangoes, it’s startling and impressive how perfect – and even architectural – a piece of fruit can be when raised by expert hands.

Wildly expensive fruit is a popular traditional luxury gift in Japan, and now the pricey haute couture produce trend is spreading to America with the introduction of “the Tesla of strawberries.”

Expensive fruit is a popular luxury gift in Japan, and the pricey couture produce trend is now in America with the Tesla of strawberries.

That’s right, and you heard it here first: the fetishization of fruit may soon be a New Luxury Thing in places other than Japan.

Here’s what’s behind this luscious luxury fruit trend, and how you can join in if this sounds like your idea of the perfect personal indulgence – or the perfect gift.

the tradition of fruit as a luxury gift

The custom of growing artisanal “haute couture” fruit originated in Japan during the semiannual religious holidays. Twice a year, families offer gifts of food to ancestors and deities at shrines and graves. Over time, the gifts extended to living relatives and friends. Because vegetables and fresh water have always been plentiful in Japan, some speculate that fruit became a luxury item because it wasn’t essential for survival.

In that context, any fruit would have been considered a luxury – but a nearly-perfect one? The ultimate respectful and thoughtful gift.

Expensive fruit is a popular luxury gift in Japan. Now the trend is slowly spreading to the U.S.

Today, these carefully grown fruits are status symbols for some. For others, they take on a spiritual significance. Sometimes they’re prized for their perfect taste. But in some cases, it has nothing to do with flavor and everything to do with visual appeal and rarity. Couture fruit might be consumed – but a single item might instead serve as a luxury decoration.

now in the Produce Aisle at Luxury Department Stores

Today, every luxury department store in Japan has a space solely devoted to the sale of expensive fruit. It’s almost always in the basement, in a special area lined with temperature-controlled glass display cases.

Expensive fruit is a popular luxury gift in Japan, and the pricey couture produce trend is now in America with the Tesla of strawberries.

There are also standalone luxury fruit boutique shops – fruit parlors – in tony neighborhoods like Ginza in Tokyo. One of the best known is Sembikiya – its stores appear to be selling fine jewelry, not fresh fruit. And sometimes, the prices match what one would expect to pay for a special ring or a bracelet. Run by the same Samurai-descendant family since 1834, the company’s website describes its Sembikiya Nihonbashi Flagship store as “a fruit museum and a fruit [art] gallery.”

the ultimate luxury gift shop: the best from Japan

Other top-rated fruit parlors include Takano and Sun Fruits. Farmers compete to supply these outlets with blemish-free fruit. To achieve it, they resort to measures that may sound extreme. For example, it’s been reported that some orchards are hand-pollinated with tiny wands. And that individual cherries are scrubbed and polished by hand. Urban legend? Maybe. But just thinking about it is making us hungry.

Which reminds us: a splendid outgrowth of the luxury fruit cultivation in Japan are the luscious fruit sandwiches. Made for Instagram, and almost too pretty to eat, TimeOut says that one of the best places to splurge on one is Takano. Duly noted.

the best haute couture fruit to give as a luxury gift

There are many kinds of luxury fruit cultivated in Japan. Here are 5 that are good to know about, and if you have a gift occasion coming up and you’re able to lay hands on one, you should go for it.

And in the case of strawberries, the ultimate luxury specimen may soon be available in the good ‘ole USA at an upscale market near you.

Originating (and only grown in) Yūbari, Hokkaidō (a region known for its fantastic skiing and cool dry temperatures), these luxurious melons are grown solely in greenhouses. The seeds are carefully cultivated, and the soil often includes local volcanic ash. Paper “hats” protect the plants and their fruit from excessive sun exposure. Each plant grows only one melon, so that the fruit can absorb its full sweetness without competing for nutrients with another melon.

The skin of the melons is always blemish-free (farmers who handle the fruit wear white gloves, as if these were rare books). The melons are individually wrapped and presented in ornate wooden boxes when they’re ready to be sold.

Gifting them to someone outside Japan is pretty difficult, as these don’t travel well. As one blog suggested, the best way to give someone who doesn’t reside in Japan a melon of this quality may be to gift them a trip to the country during the season when the melons are ripe. Happily, they’re best from May to August each year. Summer vacation plans, done and dusted.

You might ask “why grow a square watermelon?” We prefer to ask “why not?” After all, it’s a lot harder to do than you might imagine.

Square (or cubed) watermelons are grown in wooden boxes, which doesn’t sound so difficult. However, the tricky part is  keeping the fruit oriented in just the right way as it grows, so that the stripes run in a perfect parallel vertically across the fully grown fruit.

Reportedly, the square watermelon was first developed by Japanese graphic designer Tomoyuki Ono in 1978. Authentic square watermelons can only come from Zentsuji, in Kagawa prefecture. The designer holds the patent for them, that’s the only place they’re legally allowed to be grown.

You won’t be surprised to learn that there are also heart-shaped and triangular watermelons for sale in Japan now, too. Once you start shape-shifting, it’s hard to stop.

We’ve also read reports that the final product, while visually stunning, is not particularly tasty. That’s because they are harvested before they’re fully ripe. But as a statement gift, decorative object or conversation starter at your next dinner party, you could hardly do better than this.

the best luxury gifts in gourmet food and drink

Right about now, some of you may be demanding why can’t I buy a square watermelon in America?

No word on that, but in the meantime, the ultra luxurious Japanese-style strawberry may soon be coming to your doorstep. The Omasake Berry from Oishii Berry has arrived. Meet the self-proclaimed “Tesla of strawberries!”

Expensive fruit is a popular luxury gift in Japan. Now’s your chance to sample “the Tesla of strawberries.”

Currently available in New York City, New Jersey and Los Angeles for both pick up and delivery, these are probably as close as many of us will get to the artisanal luxury experience of eating a perfect piece of fruit. The founder transported the seeds for these berries from Japan and established an “indoor vertical strawberry farm” in the U.S. to cultivate them.

Behold “the Tesla of strawberries” from Oishii Berry. Courtesy Photo.

You’ll find the fresh berries in gourmet grocery stores in Manhattan like Eli’s, Murray’s Cheese and Butterfield Market. In New Jersey, they’re available at a handful of small gourmet food shops. And in LA at only two locations as of this posting. A package of 8 goes for $50.  You can also purchase a strawberry gift card in case you’d like your gift recipient to control the timing of the delivery.

If anyone is wondering, yes we would happily accept these in lieu of flowers this Valentine’s Day. Or Mother’s Day. You know. Whenever.

We’d be equally excited about a gift of gorgeous grapes, but for now, these are available exclusively in Japan.

Relatively new to the luxury fruit scene in Japan, the “Ruby Roman” grape is grown in Ishikawa Prefecture and was first sold commercially in 2008. The grapes are cultivated to exhibit a beautiful red color – and named after the jewel of the same hue.

Ruby Roman grapes are among the popular luxury gifts of expensive fruit in Japan.

To be sold as authentic “Ruby Roman” grapes, the fruits must weigh 20 grams each and have a sugar content of 18 per cent. To preserve its ultra-luxury status, the producers offer just 2,400 bunches of Ruby Romans each year. They’re usually sold in clusters of about 25 grapes.

Finally, spare a moment for the humble red apple, which in Japan occupies an elevated status. “Sekai-ichi” means “world’s best,” and these seem to live up to their name. They were developed in Aomori Prefecture in the 1970’s and remain among the most popular of the luxury fruits. These red apples are noteworthy for their large size — one of them can weigh more than two pounds. And like their brethren, they are grown with meticulous care to obtain the perfect color and shape.

Their hefty size is one reason they’re so rare. One tree can only hold so many, after all. They cost about $20 each in fruit parlors and luxury department stores. If you’re determined to try one of the most expensive fruit varieties from Japan in America, Marketwatch reports that the Red Apple Farm in Phillipston, Massachusetts has one tree that bears this special fruit. And they sell them for only $3 each. Comfort me with apples, indeed.

That’s the basic overview of the heritage of expensive fruit in Japan and why pricey couture produce seems to be migrating to the US, as evidenced by the press coverage of “the Tesla of strawberries.”

Personally, we think this is a trend whose time has come. Luxury consumers in the West are increasingly focused on plant-based diets and forgoing meat. More and more, they eschew chemicals and prize craftsmanship and the human touch. So we say this is the time to get ahead of the curve – it feels like gorgeous fruit might be the luxury gift we all need right now. Instead of saying it with flowers, why not say it with fruit this year? What do you think, dear reader? Is the berry the new bouquet?

Pamela Thomas-Graham is the Founder & CEO of Dandelion Chandelier. A Detroit native, she has 3 Harvard degrees and has written 3 mystery novels published by Simon & Schuster. After serving as a senior corporate executive, CEO of CNBC and partner at McKinsey, she now serves on the boards of several tech companies. She loves fashion, Paris, New York, books, contemporary art, running, skiing, coffee, Corgis and cats of all kinds.