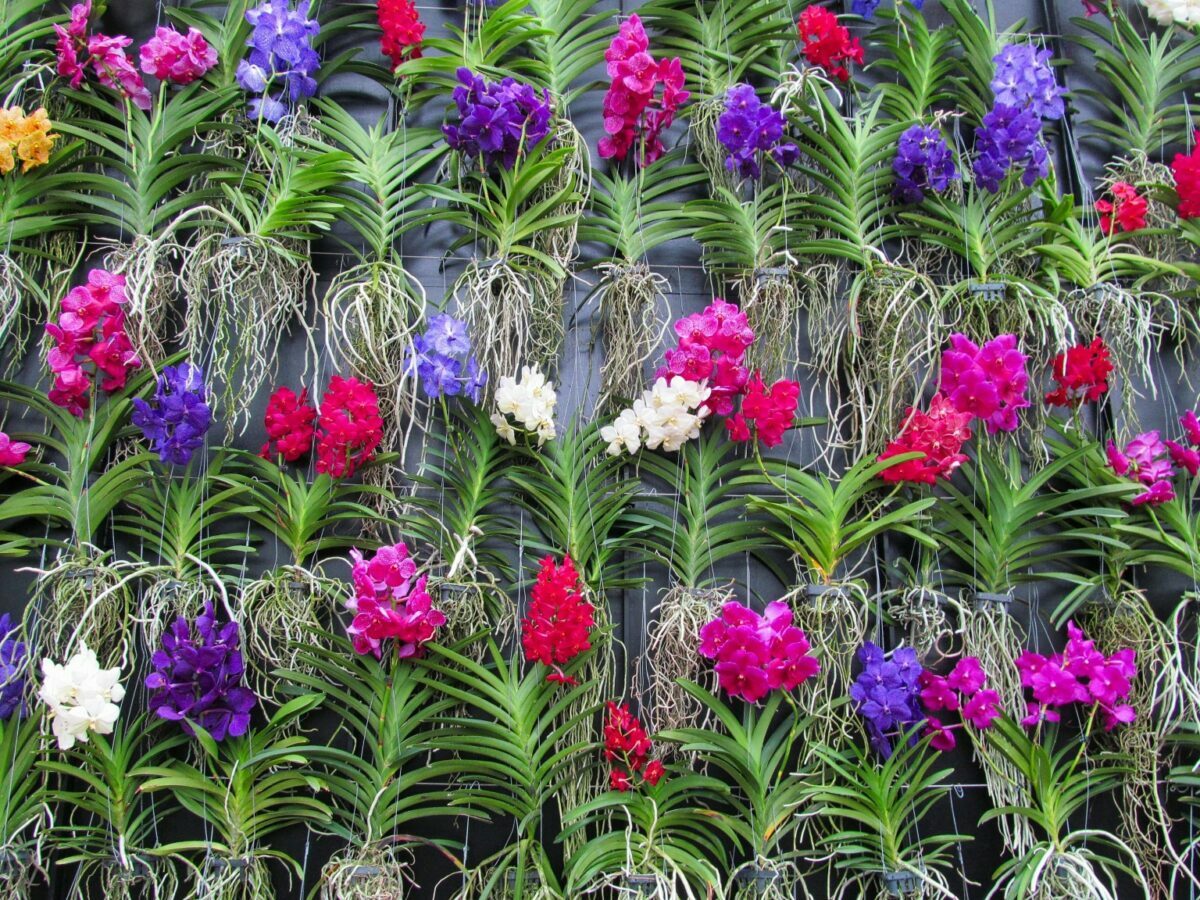 In the depths of winter, sometimes the spirit needs a reminder of the glories of spring. Surely that’s why so many of the best luxury orchid shows in the world happen in February and early March. For those who love gardens and are becoming deeply weary of cold and snow, here’s our list of the best orchid shows in the world, with their dates and themes for 2022 – including the famous New York Botanical Garden show and the one in Kew Garden London. Plus some fun facts about orchids to make your visit even more enjoyable. Even if you only travel to these in your mind, we hope it’ll leave you feeling restored.

Before we begin, a few fun facts that will make a visit to an orchid show even more special. Experts report that orchids have been around for at least 80 million years, based on the pollen found stuck to the backs of bees fossilized in amber.

Fun fact #1: What are the key characteristics of an orchid?

Depends on who you ask. Botanists describe orchids as perennials that lack a permanent woody structure and have flowers with bilateral symmetry. Orchids generally feature one petal (the labellum) that is different than the other two. They’re popular in the lab because they take well to genetic experimentation. Charles Darwin wrote extensively on orchid cross-pollination.

Fun fact #2: Orchids are essential to the perfumers’ trade

Orchid scents vary from beguiling floral scents to odors like dung and rotten meat. That’s because the fragrance of orchids evolved to attract the pollinator needed. Bees and butterflies like sweet scents. But flies like the odoriferous ones. Find the right orchid, and the resulting fragrance will be a hit. Black Orchid was Tom Ford’s first fragrance, and 10 years later the bestseller has spawned a family of scents, including Velvet Orchid and Orchid Soleil.

Wedding planners would add that orchids are in the top 10 favorite flowers globally. Along with poinsettias, they’re the most popular houseplants in the world. Perhaps surprisingly, orchids are viewed favorably as Valentine’s Day flowers by millennials.

Fun fact #4: many cultures view orchids as symbols of renewal and healing

In Chinese culture, orchids are one of the “Four Gentlemen.” The group also includes bamboo, plum trees and chrysanthemums – each represents one of the four seasons. Orchids, in this case, represent spring. To the ancient Greeks, orchids suggested virility. Several cultures believe that orchids have healing and protective properties. For example, the Aztecs were said to drink a mixture of the vanilla orchid and chocolate to give them power and strength, and the Chinese believe orchids can help cure lung illnesses and coughs.

Fun fact #5: orchids have a history of being crazy-making

For natural beauty, the loveliness and elegance of orchids is hard to surpass. Small wonder that they’ve inspired passionate and sometimes bad behavior.

If you’re in any doubt about that, just read The Orchid Thief. Susan Orlean’s 1998 book recounts her reporting on the arrest of John Laroche and a group of Seminoles in south Florida for poaching rare orchids (including the Ghost Orchid) in the Fakahatchee Strand State Preserve.

The plot of the subsequent film loosely based on her work – the 2002 Spike Jonz film Adaptation (in which Meryl Streep plays Orlean) – is largely driven by the difficulties of capturing on film the nuances of these flowers and their effect on people.

Fictional detective Nero Wolfe was an orchidophile. In real life, “orchidelirium” was the name for the ailment suffered by wealthy orchid fanatics in the Victorian era, who sent explorers and collectors to almost every part of the world in search of new varieties. These expensive expeditions were often shrouded in secrecy and it was not unusual for collectors to spread misleading information about the locations where new orchids were found (new exotic orchids were most often sold at auction in London at sky-high prices).

the most unusual orchid show yet is all about sculpture

Fun fact #6: Orchids are not as rare as you might think

Elusive, desirable, gorgeous, complex, delicate and refined, one could argue that these hothouse flowers are the very embodiment of luxury.

So you might be surprised to learn that while considered exotic, orchids are actually not all that rare. They’re classified by botanists as members of the Orchidaceae family, one of the two largest families of flowering plants, with almost 28,000 currently accepted species. That’s four times the number of mammal species. They’re the national flower of many countries, including Venezuela, Columbia, and Singapore.

Ready to fall under their spell? Here are the best orchid shows in the world, including the famous New York Botanical Garden and Kew Gardens in London, in which you can experience their beauty, styled and curated by the most talented floral artists in the business.

Kew Gardens London Orchid Festival will once again be held in the Princess of Wales Conservatory. This year the festival will celebrate the wildlife and culture of Costa Rica and the biodiversity of Central America.

Among the enchanting displays at Kew this year are vibrant installations of monkeys, sea turtles, and the native quetzal bird, a symbol of Costa Rican forest protection. There is also a glasshouse pond that will be filled with vibrant yellows and oranges, to represent the national flower and rising sun of Costa Rica.

On Saturdays, the Kew Gardens will present traditional Costa Rican folk dance performances outside of the Princess of Wales Conservatory at 11:00 AM and 1:00 PM.

This year’s New York Botanical Garden Orchid Show will feature the dazzling floral creations of Jeff Leatham, famed artistic director of the Four Seasons Hotel George V, Paris and floral designer to the stars. Held in the Enid A. Haupt Conservatory, the show will feature thousands of vibrant orchids.

Each gallery of the exhibition will feature vibrant colors of orange, yellow and green in a field of white and purple that represent a kaleidoscope tunnel of lights.

During the evenings of March 26, April 2, 9, 16, 22, and 23 between the hours of 7:00 – 10:00 PM, step into a world of color and style with evening performers on stage along with signature cocktails and local flavors from the Bronx Night Market.

The 69th annual Pacific Orchid and Garden Exposition in San Francisco will be held in the County Fair Building. The theme for the 2022 Exposition is “Orchid Masquerade,“ and there will be more than 150,000 orchids on display.

There will be a preview night event on Thursday, February 24th from 6:00 – 9:00 PM for any adult over the age of 21 (since alcohol will be served).  These guests will be the first to see the orchid displays, and have the first pick from show vendors.

The Orchid Extravaganza at Longwood Gardens in Philadelphia is held annually in the 4-acre Conservatory, and is a wonderful homage to some of the original orchid shows, like the one at Kew Gardens in London. While this year’s presentation will be lower-key due to continuing concerns over coronavirus, visitors will still find a lush sanctuary filled with thousands of vibrant, artfully presented orchids.

This year’s annual Chicago Botanic Garden Orchid Show is called “The Orchid Show: Untamed.” It celebrates the unexpected verve of wild orchids while they take over an old secret garden while twining around the columns and pillars. In the quiet of winter, you’ll soak up the color and fresh blooms of thousands of orchids and other tropical plants.

The annual Japan Grand Prix International Orchid and Flower Show takes place in the Tokyo Dome and is one of the world’s largest floral events. Over 1000 exhibitors that will be on display during this eight-day program. The orchid varieties include tropical, temperate, oriental, and Japanese orchids.

Spectacular opportunities to view orchids around the world: the Singapore Botanic Gardens.

In Paris, the 8th annual “Mille & Une Orchidées” (A Thousand and One Orchids) will feature over 1,000 blossoming orchids in the tropical greenhouse of the magnificent Jardin des Plantes. Visitors can also purchase magnificent specimens of orchids from specialists, thanks to the pop-up shop near the greenhouse.

“A Thousand and One Orchids” at the Jardin des Plantes in Paris.

8. The National Orchid Garden in Singapore

Finally, the National Orchid Garden in Singapore is located on the highest hill in the Singapore Botanic Gardens and is a year-round opportunity to surround yourself with these lovely blooms. The garden is home to over 1,000 orchid species and 2,000 hybrids. What is unique about this garden is that its plants are displayed in four separate color zones: Spring, Summer, Autumn, and Winter.

The best places to view orchids this month: the National Orchid Garden in Singapore. Courtesy Photo.

That’s everything you need to know about some of the best orchid shows in the world, including the New York Botanical Garden and Kew Gardens in London, and their dates and themes for 2022. If you go, have a wonderful time. Just remember, you’ve been warned: orchidelirium is a real Thing. It’s catching, and it’s pretty hard to cure. Which one of these shows is your favorite?

Pamela Thomas-Graham is the Founder & CEO of Dandelion Chandelier. A Detroit native, she has 3 Harvard degrees and has written 3 mystery novels published by Simon & Schuster. After serving as a senior corporate executive, CEO of CNBC and partner at McKinsey, she now serves on the boards of several tech companies. She loves fashion, Paris, New York, books, contemporary art, running, skiing, coffee, Corgis and cats.