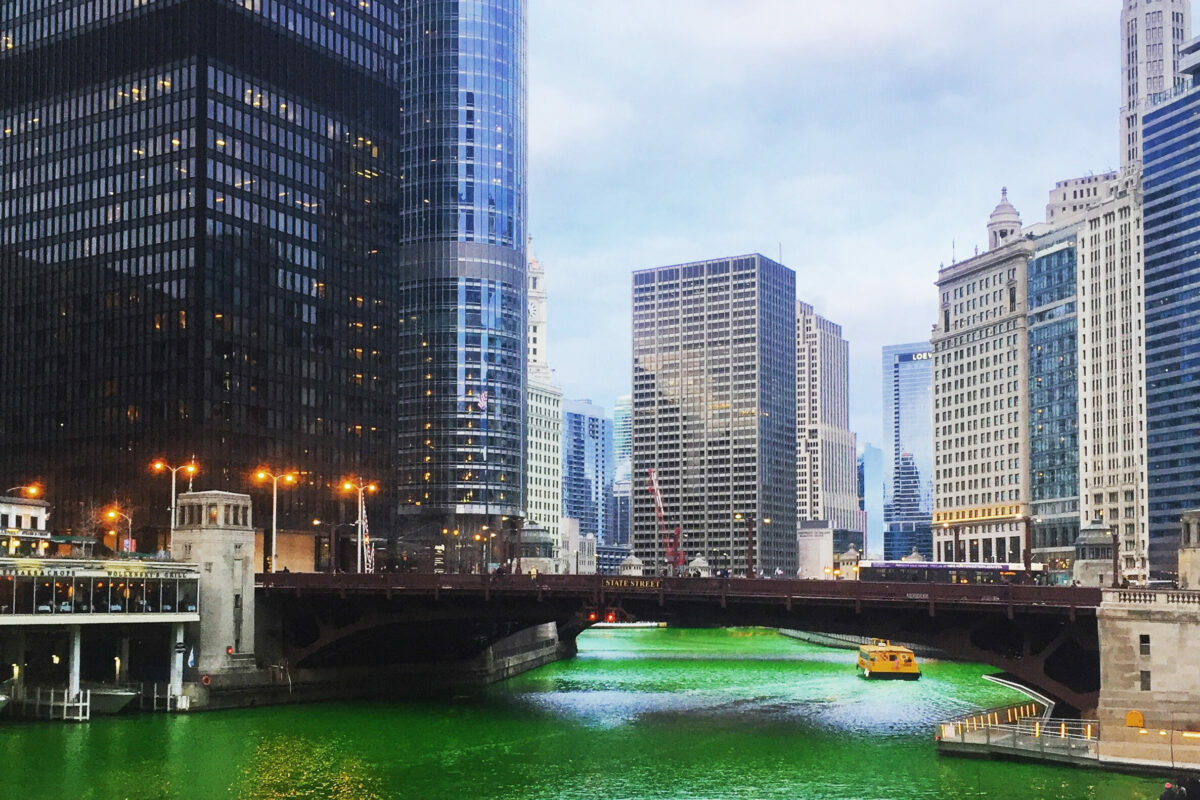 Saint Patrick’s Day is a joyful time, and it can also be a perfect time to take a mini-vacation. But where to go? The top trips have some historic or thematic tie to the holiday, and a luxurious hotel to stay in, and at least one fantastic party, or parade, or wild bacchanalia. Good food and drink are preferred, but not required. If money is no object, and you can get away for a few days, here’s our surprising list of the 10 best trips to the top places in the world for a vacation to celebrate Irish heritage and Saint Patrick’s Day this year.

where’s the best place for a vacation to celebrate Saint Patrick’s Day?

They say that on St. Patrick’s Day everyone’s Irish, so it should come as no surprise that there is no shortage of celebrations around the globe that day.

The best places for a trip for a Saint Patrick’s Day vacation.

Originally a religious holiday to honor the patron saint of Ireland, March 17th is all about celebrating the Irish spirit. Traditions range from costumed and shamrock-filled fun runs to bagpipes to rivers flowing with green water.  You will also find reenactments of storied Irish wakes and blessings of beer, too.

So whether you want a sacred or secular celebration, there are plenty of ways and places to go to show your pride on St Patty’s day.

And while cities like Dublin host an impressive celebration, travelers needn’t only limit their options to the Emerald Isle. We’ve found 9 other surprising cities around the world that go gaga for green on St. Patrick’s Day, as well.

For a true St. Patrick’s Day devotee, a trip to Ireland is a must. The Irish go all out for their national holiday with a host of activities including colorful street carnivals, bustling parades and craft beer markets in practically every town, village or city.

The best places and trips for a Saint Patrick’s Day vacation: the Oldest Pub in Dublin, Ireland.

In the city of Dublin you will find iconic buildings illuminated in green, opportunities to learn traditional Irish dancing, a chance partake in historical walking tours and of course, the yearly Dublin St. Patrick’s Day Parade, all of which are part of the city’s larger annual St. Patrick’s Day Festival.

Boston.  In Boston, where Irish-Americans account for about 20% of the population, you will find nearly 1 million people gathered together for the city’s annual St. Patrick’s Day Parade filled with colorful floats, brass bands, military units, historic Minutemen groups and of course, St. Patrick himself.

In addition to the parade through South Boston, you can enjoy gourmet Gaelic food in much of the city’s hotels and restaurants and a hometown performance by the Celtic punk rock group, the Dropkick Murphys at the House of Blues.  If you are looking for something a little more historical in nature, Boston is home to the Irish Heritage Trail which make stops at important landmarks of Irish-American artists and heroes from the 1700s to the present.

The city is also home to the John F. Kennedy Presidential Library and Museum, which is dedicated to the memory of the United States’ 35th president and one of Boston’s most famous Irish-Americans.

New York.  First held in 1762, the New York City St. Patrick’s Day Parade is the largest in the US (and some even say in the world) although it features no floats or motorized vehicles. This year the parade will be held on March 16th but like previous years will pass St. Patrick’s Cathedral on Fifth Avenue while ending at the Irish American Historical Society.

Many of the city’s pubs and restaurants get into the act with Irish themed parties, drinks and, of course, corned beef and cabbage dinners.  One of the highlights includes McSorley’s, the city’s oldest Irish pub where everyone from Abe Lincoln to John Lennon have passed through for a pint.

If you have time, drop by Ellis Island to explore where hundreds of thousands of Irish immigrants made their first steps onto American soil.  Today the island boasts an immigration museum to tell the story of how the United States has welcomed immigrants from all over the world to her shores.

On St. Patrick’s Day, the Windy City transforms into one of the greenest cities in the world thanks to members of the Journeymen Plumbers Union who pour dye into the Chicago river at 9:00 am.

If that was not enough, the city also hosts not just one but three parades making it very easy to celebrate St. Patrick’s Day there no matter which part of town you are in.  If you’re looking to avoid the craziness of the parades, drop by the St. Patrick’s Day festival at the Irish American Heritage Center where you will find music, dance, food, activities and Irish gifts for sale.

Oh yeah, and if drinking Guinness and Jameson isn’t your thing, you can grab a bottle of local Green River Soda almost anywhere around town to enjoy instead.

what are the best books to read for Saint Patrick’s Day?

Outside of New York and Ireland, London hosts the next largest St. Patrick’s Day celebration in the world.  Here, Irish expats can be found sipping a pint at one of the city’s many Irish pubs or sporting shamrocks in the annual St. Patrick’s Day Parade.  Starting in Piccadilly, the parade passes famous landmarks such as The Ritz and Piccadilly Circus, which have been known to turn a shade of green for the occasion.

The best places and trips for a Saint Patrick’s Day vacation: The London Eye on March 17.

This years St. Patrick’s Festival at Trafalgar Square will run for three days (Mar 15 – 17) with a lively parade of music and ceilidh dancing, plus plenty of other things to do, from an Irish folk show and film festival to Irish historical walking tours.

Known as the Emerald Isle of the Caribbean, the tiny British West Indies island of Montserrat is the only country outside Ireland where St. Patrick’s Day is an official public holiday.

The island’s Irish heritage dates back to the 17th century when it became a haven for Irish Catholics who had been persecuted on other Caribbean islands.  This Irish history is still evident today from the moment visitors arrive at the airport and receive a shamrock shaped stamp in their passports.

Today, Irish culture is blended with a rich African culture and the country’s week long St. Patrick’s Day celebration is the perfect example of that.  African inspired events such as the freedom run and masquerade dancing commemorate the slave history in Montserrat, specifically an unsuccessful uprising that took place on St. Patrick’s Day in 1768.  The week of events remembers their sacrifice as well as the Irish heritage which has been passed down from generation to generation and which makes Montserrat and its people truly unique.

Tokyo.  The first St. Patrick’s Day parade was held in Tokyo in 1992 and was meant to be an introduction about Irish culture to Japanese people.  Well it turns out, that the Japanese loved it and today, the parade lives on as a mix of both cultures, growing in popularity each year.

The best places and trips for a Saint Patrick’s Day vacation: Tokyo.

Though there are now several parades that take place in and around Japan on that day, the largest is by far the Tokyo St. Patrick’s Day Parade in Omotesando with 15,000 participants and 50,000 spectators. The event features marching bands, cheerleaders and plenty of enthusiastic supporters all sporting the color green.

Amsterdam.  For any music lover, a trip to Amsterdam for St. Patrick’s Day is a must. Held in the heart of Amsterdam at the Splendor Amsterdam music center, visitors can enjoy the three day St. Patrick’s Festival Amsterdam.

Now in its 6th year, the music fest features classical, pop and jazz music, as well as Irish dancing, music workshops and traditional Irish foods.  This year will see iconic Irish singer Mary Coughlan, known as Ireland’s Billie Holiday, headlining the weekend.  Afterwards you can take in a fresh pint of Guinness at any one of the city’s many Irish pubs.

the best movies to watch to celebrate St. Patrick’s Day

Dublin, California.  This city lives up to its name on St. Patrick’s Day with a three day festival (Mar 15 – 17) that has become the largest celebration of its kind on the west coast.  As many as 80,000 visitors gather to enjoy Irish music and dance on three stages with a full schedule from morning to late afternoon.  Traditional foods such as Irish stew, corned beef, fish and chips, colcannon (mashed potatoes with cabbage or kale) along with Guinness and Harp beers are available, as are the less traditional but equally fun green shamrock shaped funnel cakes for dessert.  The festival also features a traditional Irish Tea Cottage where guests can enjoy Irish tea with shortbread and scones and a marketplace with more than 200 vendors featuring tartans, handknit sweaters and Celtic jewelry.  The weekend is also home to a Dublin Sister City Green and White Gala held together with the it’s sister city Bray, Ireland.

The Saint Patrick’s Day Parade in Savannah is one of the largest in the country, and certainly in the South.  At over 200 years old, Savannah’s St. Patrick’s celebration is one of the largest in the country, second only to New York City,    The fountain in Forsyth Park will be dyed green. the Irish were among some of the first settlers to arrive in the new colony in 1734.  In the 1850s, during The Great Famine, shipping routes carrying immigrants to America ran from southeastern Ireland to Savannah.

Those are our top 10 picks for where to celebrate Saint Patrick’s Day this year, or to take an Irish heritage trip for your next vacation. Where are you planning to celebrate this year?

Whether you’re a direct descendant of the great patron himself or just Irish for the day, we hope you have a fun, festive and safe St. Patty’s Day this year.  Sláinte!