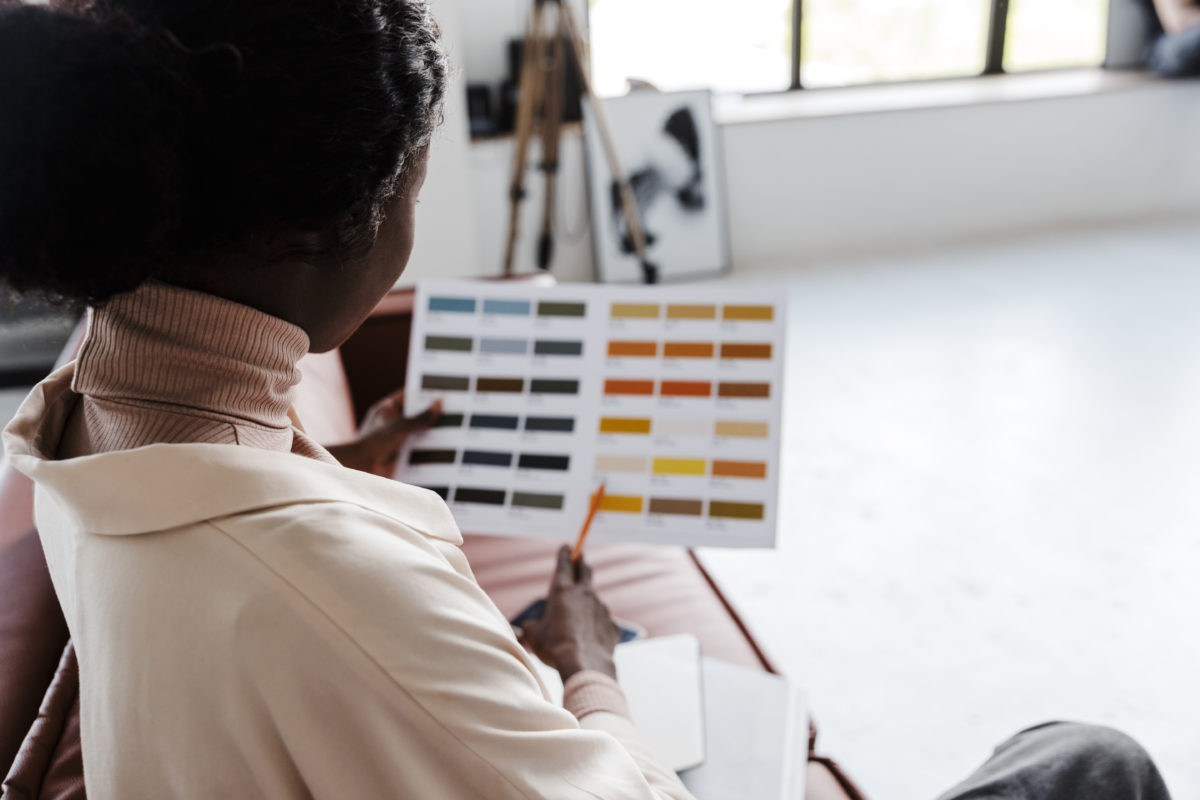 Wondering who the most influential Black interior designers are right now, and how to find an exceptional black design professional for your next project? Our correspondent Julie Chang Murphy has done the research, and now she’s sharing the names and recent work of 12 of the top Black luxury interior designers and design companies to know right now.

At this point in the coronavirus pandemic, after spending more time at home than ever, many of us are seriously considering our interior design choices. And dreaming of a few upgrades.

As we scroll hungrily through Instagram to admire all the boldly-painted kitchen cabinets and  eye-catching backsplash tiles, it’s a good time to consider upgrading our feeds as well.

Who are the influential African-American interior designers to know right now?

The lack of black representation in the interior design world might not garner as much attention as in other industries (thinking of #oscarssowhite). But our home decor reflects so much of our personality and values. So doesn’t it make sense to look for a diverse set of design perspectives to help shape our aesthetic eye?

It’s probably no surprise that the ranks of interior designers in America are overwhelmingly white. The American Society of Interior Designers reports that less than 2% of their membership identify as black. At the top end of the market, the presence of black interior designers is even more limited.

Who are the black equivalents of household names like Bunny Mellon and Kelly Wearstler and Jonathan Adler? How can you find an African-American designer for your next interior project?

Who are the most influential African-American interior designers to know right now?

Here are the creatives whose names we all should start committing to memory. Black interior designers, as well as makers, whose gorgeous work will inspire. Because while we might not be able to customize the architecture and building materials of our homes, there are an infinite number of interior design choices to be made. And there are many talented designers in the African-American community who are trained to help.

how to find an African-American interior designer

For additional suggestions in your local area, be sure to check out the Black Artists + Designers Guild (BADG), an online directory and community for black creatives. And the Black Interior Designers Network, a resource people can use to find vetted local designers.

Who are the top black interior designers to know right now?

Who are the top Black Interior Designers to Know Right Now?

Sheila Bridges, whose work has appeared in the pages of Architectural Digest, The New York Times, and House & Garden recounts being followed in stores and showrooms. And frequently being dismissed by sales reps who would tell her that a chandelier or chaise was too expensive. Despite the overt racism, Bridges is one of the most successful black interior designers in the country. She has authored an interior decorating book and a memoir. She even had her own TV show in the early aughts.

Bridges traces the roots of her aesthetic to a childhood steeped in art. However, her design sense and love for classical proportion crystallized when she lived in Italy. Her guiding philosophy is to give herself- and her clients- time to enjoy the serendipitous process of filling the home. One of her most famous commissions was Bill Clinton’s Harlem office. And she is well-known for her Harlem Toile pattern wallpaper. It’s a provocative take on the traditional 18th-century pastoral scenes. The pattern ironically substitutes African-Americans doing “stereotypical things,” like picnicking while feasting on watermelon slices, or dancing to a huge boombox.

Who are the Top Black Architects in America Right Now?

After graduating from art school, veteran interior designer Cecil Hayes found herself without a mentor. But as she points out in an interview in Architectural Digest, “…it was my mother and my aunt who made me understand that good taste has something to do with a wonderful lifestyle. No matter what they had, they tried to make sure that they kept it nice. And made sure that it matched and it looked good.” After a few unsatisfying jobs after graduation, Hayes took out a $6,000 loan and opened her own storefront in South Florida.  She had a hunch that if she worked out of a very visible place, people would walk by, see her, and hire her.

Hayes has since had a long and illustrious career. She views each space as an empty canvas, waiting to become a composition of shapes, colors and textures. She has had her own line of furniture and designed homes for Samuel L. Jackson, Wesley Snipes, and a slew of famous professional athletes. She was inducted into the NAACP Hall of Fame, and she is also the author of two interior design books.

D.C-based Darryl Carter does not have a secret formula for his sophisticated rooms, which always seem to have just the right touch of patina.

He works intuitively, and gravitates to history and the wonder of the former lives of antiques. As well as things “precious and primitive.” As a child, he relished being sent to his room as punishment, because he would find creative ways to move his three pieces of furniture around.

But prior to his success as an interior designer known for being a “new traditionalist,” Carter was actually working as a lawyer. That career became history when his own house appeared on the cover of a national magazine. He found clients overnight. His best piece of advice is “just be organic and honest in how you articulate the place you spend most of your time.” In addition to designing nuanced, neutral rooms, Carter has multiple partnerships and collaborations. They range from designing a lighting collection for the Urban Electric Co., to paint for Benjamin Moore, and furniture for Baker Furniture.

Ward mentored her for over year; McSwain has since inherited her interior design company (at the age of 30). She wants to fight the assumption that black designers only work with athletes, singers or rappers. In fact, she has “designed so many single-family homes for people who have retired from the military, doctors, lawyers —for people from all aspects of life.”

As part of the BIDN, McSwain is leading the charge to diversify the design world and highlight the work of her network’s 200 talented designers.  Most importantly, her mission is to create an inclusive community for them. She released a “How-to be a black designer’s ally” which went viral on Instagram. It includes actions like “Stop discriminatory minimum account engagement” and “Stop pushing Eurocentric design as the blueprint.”

Get inspired by the best luxury interior design books

Justina Blakeney is the designer and artist behind the colorful world of The Jungalow. Her distinctive global style stems from her own multicultural upbringing in Berkeley, California. And from living in Italy for seven years. Key to her design philosophy is the concept of living energies in the home: the people, the pets, and the magic of plants. Her book, “The New Bohemians,” is a democratic guide that shows readers how to bring positive energy to their homes.

She is highly sought after for collaborations with other brands. To name just a few, she has put her stamp on collections for Band-Aids; Keds; Target; Loloi; Wedding Paper Divas; and Studio Oh.

Michel Smith Boyd is an Atlanta and New York City-based interior designer who believes that design can communicate and unite people beyond their race, social class or sexual orientation.

His sumptuous work has been recognized in publications like Elle Décor, Traditional Home, Vogue, Veranda, Ebony, and The Washington Post. He also stars on the Bravo television show Buying it Blind.

Growing up, Kesha Franklin developed an intuitive sense of style and creativity though her father’s vast collection of back issues of Architectural Digest and GQ Magazine.

But her talents were first applied in the fashion industry. She worked as a backstage production manager and wardrobe stylist for the iconic Mercedes-Benz Fashion Week.

Today, she is a self-taught interior designer/principal of Halden Interiors, based in Greenbrook, New Jersey. Her impeccable spaces share elevated color palettes, balanced textures, and distinct furnishings. She also prides herself on an ability to understand and connect with her clients.

Malene Barnett describes herself as equal parts activist and artist. Her first success was her Malene B. range of bespoke carpets, launched in 2009. From there, her art and design studio quickly introduced a range of sculptural ceramics and mixed media paintings. She found homes alongside her textiles in projects for clients including Viacom, Marriott, and Saks.

As an activist, Barnett founded The Black Artists and Designers Guild as a response to the lack of black representation in the art and design world. The online resource and directory with special industry events showcases the existence and brilliance of contemporary black creators and makers.

What are the most popular interior paint colors right now?

Enrolling at Brooklyn’s prestigious Pratt Institute for a Masters in Interior Design was her dad’s idea. As an undergrad, Dani Arps was already arty – she studied fine art and music. She found that her dad was right- she was good at interior design, and she enjoyed it.

Now, Arps is the co-founder and Head of Design at Artisan Alliance after establishing herself as the go-to designer for tech start-ups. The start-up environment typically includes event spaces, lounges and cafés, so her designs are more than just cubicles and desks.  They offer equal parts function, comfort, and style. Her uniquely eclectic, yet slightly industrial take on design has garnered her commissions from Venmo, Fashionista, Gilt, SeatGeek, Daily Harvest and General Assembly.

Jeanine Hays was a practicing policy attorney and Bryan Mason was Ph.D student with a background in anthropology and philosophy before they were inspired to create AphroChic. The successful husband and wife team is known for their signature “Modern.Soulful.Style.” They have also written a book, REMIX: Decorating with Culture, Objects and Soul.

Their brand includes interior design services as well as a line of culturally-inspired home decor products. It proves that ethnic heritage and culture can go hand-in-hand with luxury and modern taste. Think sconces, wallpaper, rugs, and pillows. The duo’s work has been featured on HGTV and in Elle Decor and The New York Times.