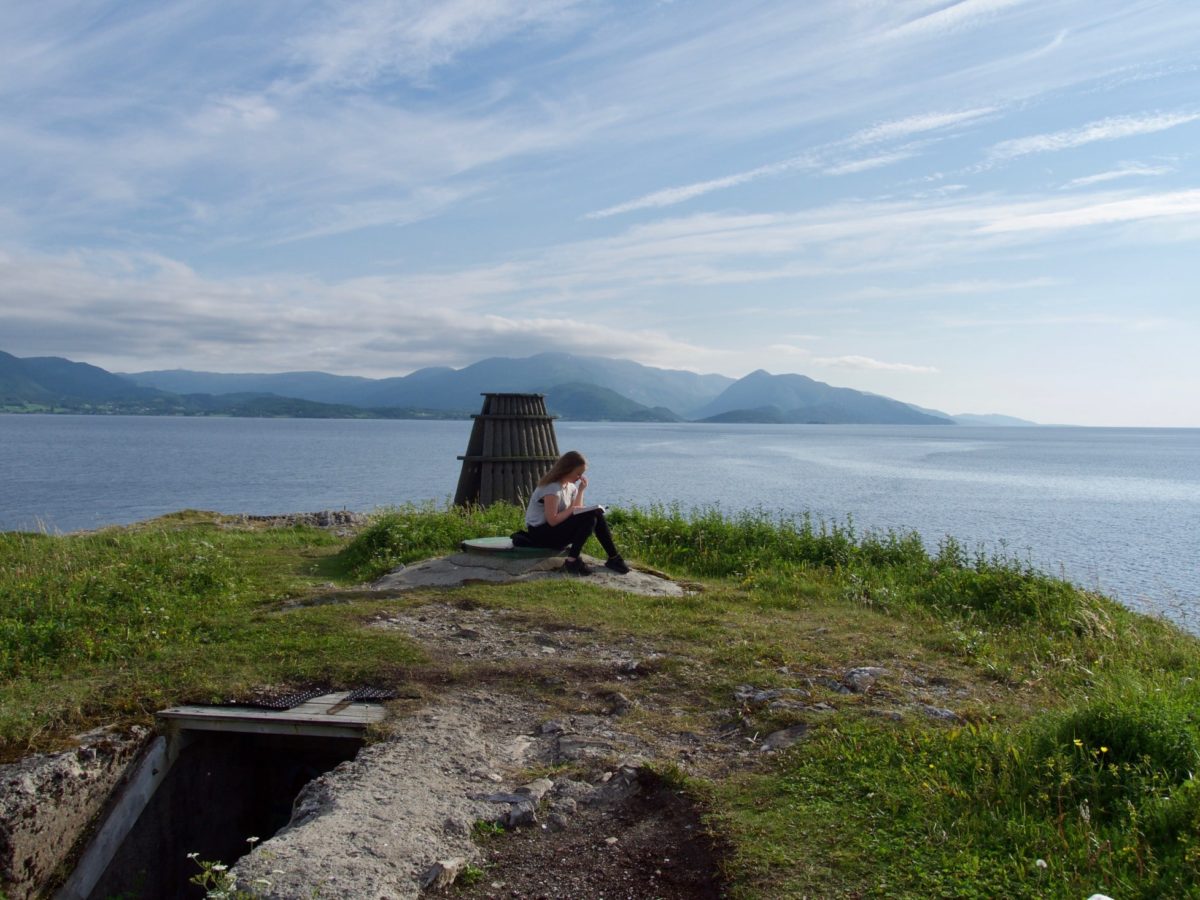 Easter is approaching, and with it come some unusual traditions around the world. For example, did you know a Nordic Easter involves crime solving? In Norway, it’s a beloved annual holiday activity. Our correspondent Jillian Tangen fills us in on the true origin story of the Norwegian “Easter Crime” tradition of reading Nordic Noir fiction and watching crime shows, along with 10 classic book and streaming TV show recommendations. Dark chocolate goes rather well with all of them, by the way. Watch your back, bunnies.

Easter in the US brings to mind colorful baskets brimming with candy, fluffy Easter bunnies and all things pastel.

In the country of Norway though, Easter is celebrated a little bit differently.  While people in the US are painting eggs and hosting brunches, Norwegians are nestled in the mountains solving mysteries and crimes between ski trips.

It’s no recent phenomenon either. And it has only increased in popularity, thanks to the rise of the likes of Stieg Larsson and Jo Nesbø.  For almost 100 years, Norwegians have celebrated Easter by reading, watching and solving true crime.

the start of the Easter Crime tradition in Norway

The tradition of Easter crime solving, known in Norway as Påskekrim, dates back to 1923. That’s when authors Nordahl Grieg and Nils Lie took marketing into their own hands for their new book about a train robbery that took place on Easter.

Instead of posting a conventional ad in the newspaper, Aftenposten, they convinced the editors to publish an excerpt from the book on the front page. Readers believed the story to be actual news and were instantly enthralled, even when they discovered the story was fiction. Norwegians purchased the book in droves and from that point on an Easter tradition was born. All thanks to “fake news!”

Easter Crime is now found in books, movies, festivals and even breakfast tables

Fast forward to the present, and this yearly event has expanded well beyond books to include television series, movies and even mini mysteries on the sides of milk cartons. There’s even a Crime Writing Festival with 50 leading Scandinavian authors in Oslo. Krimfestivalen is, of course, held a few weeks before Easter.

Having spent a number of years in Norway for Easter with my husband’s family, I know this tradition first hand. After a day of skiing in the mountains, families retreat home for dinner and then gather around the television to catch the latest episode of the season’s newest murder mystery.

10 best places in the world for a luxury Easter holiday

And believe it or not, despite all the darkness and gloom unfolding on the television, it really is peak hygge feeling to be snuggled in and solving a crime with those you love.

no need to travel to experience Nordic Noir

Fortunately though, you don’t need to be in Norway this Easter to get in on Påskekrim.

Many of Scandinavia’s best mysteries are already on American bookshelves and streaming platforms for you to enjoy. So if you’re into moody detective dramas and a slow burn mystery, then grab your coziest sweater and a glass of Pinot Noir. And get ready to head north.

We’ve scoured the bookshelves and streaming platforms to find you the best twisted tales that Scandinavia has to offer for the Easter season and beyond.

These five books combine harsh climates with harsh crimes for stories that promise to keep you up all night reading.

If you are more into suspense thrillers than murders, then chances are you will enjoy The Boy at the Door.

While it doesn’t feature the traditional police crime solving setting of other Scandinavian mysteries, it is a serious psychological suspense story that tackles the very relatable pressures of motherhood. Set in the Norwegian town of Sandefjord, Cecilia Wilborg seems to have it all: a loving husband, two beautiful daughters and a gorgeous home. However, when someone forgets to pick up a little boy at the local pool, Cecilia agrees to take him home, only to find an abandoned, empty house.

2. The Sandman by Lars Kepler.

Don’t let the high page count of this book fool you. The Sandman is a fast-paced and action-packed thriller from the husband and wife team Alexandra Coelho Ahndoril and Alexander Ahndoril. It will keep you turning pages and possibly up all night.

The book opens with a young man who has been found malnourished and near death on a snowy railroad bridge near Stockholm. The police discover that he and his younger sister went missing almost 13 years ago and have since then been presumed to be victims of Sweden’s most notorious serial killer, Jurek Walter. However, the young man explains that his sister is still alive and being held by someone he calls the Sandman.

3. The Girl with the Dragon Tattoo by Stieg Larsson.

Chances are you might be familiar with the character Lisbeth Salander and the book The Girl With The Dragon Tattoo. Thanks to the wild success of Stieg Larsson’s Millennium series and the subsequent movies that followed, even people who haven’t read or seen it feel as if they have.

It you’re among those who has somehow missed or avoided the one up to now, consider this your second chance to get to know the world of one of the Nordic noir genre’s most captivating heroines, as she hacks her way through a forty year old missing person’s case together with the disgraced financial reporter Mikael Blomkvist.

You may recall the widely panned movie adaptation of The Snowman  starring Michael Fassbender. Unfortunately, the Hollywood version of the eighth book in Nesbø’s Harry Hole series did not do the character or the book any justice.

If it caused you to doubt reading the book or series, we urge you to reconsider. The Snowman works perfectly well as a standalone read. It follows the tortured Harry Hole as he investigates the case of a missing woman, whose son discovered her gone in the middle of the night, only to find a snowman in the yard wearing her pink scarf.

I’m Travelling Alone  is a chilling Nordic Noir fiction thriller centering on the hunt for a vengeful killer targeting children in Oslo. The novel follows Investigators Holger Munch and Mia Kruger, a brilliant detective with her own unnerving past, as they delve into the mystery of who done it, only to find that they might be closer to the killer than they originally thought. Like The Girl with the Dragon Tattoo, the relationship between the two investigators is layered and complex, making the book extra enthralling.

These five subtitled series will definitely have you clicking “start next episode” over and over again.

This dark and gritty series follows a respected chief investigator, Kari Sorjonen after he moves from Helsinki to a small town, Lappeenranta, on the border of Finland and Russia. His hope was to enjoy a slower and simpler life with his wife and teenage daughter. But he soon finds that he is in for anything but that. He is quickly pulled in to investigate a string of murders that are not only connected to one another, but possibly also to his family. There are currently three seasons of Bordertown available on Netflix.

Set in a quiet, rural fishing village on the coast of Iceland, Trapped follows the small town’s Chief of Police, Andri. He’s struggling as a single parent of two young girls while awaiting the return of his estranged wife Agnes. However, someone discovers a corpse in the harbor. And he has to put personal problems aside. The discovery surfaces just as a storm blows in. Cutting off all access to the town and leaving its three-person police force alone to cope with a growing number of dead bodies.

The series Borderliner opens with supercop Nikolai Andreassen testifying against a corrupt colleague and taking a defiant stance against misconduct in the police force in Oslo. However Nikolai’s moral compass is soon challenged. After being forced to take time off, he returns to his hometown. Where a murder has taken place that may involve his brother.  To safeguard his sibling from accusations, Andreassen attempts to cover up the case. And is soon trapped in lie after lie while blurring the lines between right and wrong.

Sweden’s Modus offers a more by-the-book Nordic crime drama than Borderliner. Having left the world of crime-solving behind for the world of academia, psychologist and ex-FBI profiler Inger Johanne Vik finds herself and her autistic daughter, Stina, both drawn back in following a series of disturbing deaths in Stockholm. Working with local detective Ingvar Nyman to find the culprit, a pattern becomes evident as the number of murders increase.  The series is an adaptation of the novel Frukta Inte by former Norwegian justice minister Anne Holt.

If you are looking for a well-paced thriller minus the gruesome murders, then check out Norway’s Nobel.  The series follows Lieutenant Erling Riiser after he returns to his family in Oslo following a recent tour in Afghanistan. He quickly realizes that he has unknowingly become a pawn in a larger plot for power, oil and money. Though not the traditional whodunnit format of a crime-filled Nordic noir, Nobel delivers surprises when you least expect them. Just as some of the best in the genre do.

That’s it, our favorite cold-weather Nordic Noir Easter crime fiction to read and streaming TV shows to watch this spring. The good news? After reading and watching one or more these thrillers, you won’t feel weird about biting the head of that chocolate Easter bunny ever again.

Are you up for this? What’s your favorite Nordic noir novel or series to add to this list?