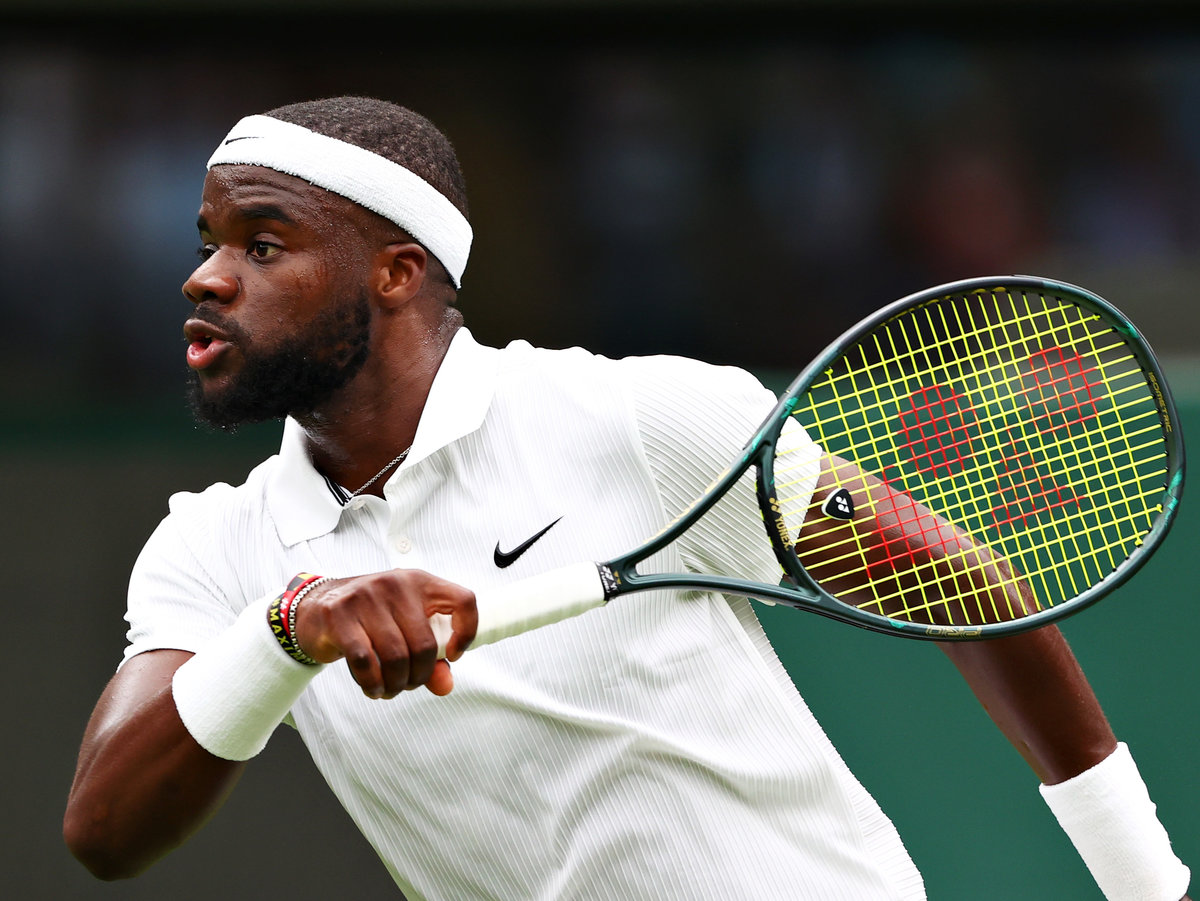 Here are 10 top headlines from the world of sports to know this Independence Day weekend.

Yesterday, the top-ranked female tennis player in the world, Iga Świątek, lost a match for the first time in four months. Świątek had been on a winning streak for the ages: 37 consecutive singles matches and six consecutive tournaments. This year she had won her second Grand Slam title. But all good things must come to an end, and for Świątek that day was Saturday on Wimbledon’s No. 1 Court. She lost to Alizé Cornet of France in straight sets, 6-4, 6-2.

The grass courts also felled another fan favorite. On the same day that Świątek lost, Coco Gauff fell to Amanda Anisimova. Ironically, Gauff and Świątek had met in the finals of the French Open – but clay is not grass, and neither has won big on a grass court – yet.

In another heart-breaker, 23-time major champion Serena Williams, playing for the first time since the opening round at the All England Club last year, lost to Harmony Tan in an opening-round match at Wimbledon, 7-5, 1-6, 7-6 (10-7). Williams turns 41 in September, and says she hasn’t decided what the immediate future holds for her professionally.

As the New York Times notes, there will be four Americans in the round of 16 at Wimbledon for the first time since 1999. And the most at a Grand Slam since the U.S. Open in 2011. The four players are Taylor Fritz, Brandon Nakashima, Frances Tiafoe (our cover star this week) and Tommy Paul.

Top 10 headlines to know heading into the week of July 3, 2022, with the big stories and major events in sports news in MLB, NFL, tennis. Taylor Fritz has advanced to the Round of 16 at Wimbledon.

Savor it while you can, people. Because Rafael Nadal won in straight sets yesterday, and Novak Djokovic is coming out strong. Nick Kyrgios is hanging around the hoop, too. It gets a lot tougher from here on in.

The Colorado Avalanche were the worst team in the NHL in 2016-17. Now they’re champions. Sunday’s Game 6 was intense – but the Avalanche fought to a 2-1 win and a national championship. The franchise has won the Cup twice before: in 1996 and 2001.

Meanwhile, Tampa Bay’s goal of being hockey’s first “three-peat” champion since the New York Islanders won four straight Stanley Cups from 1980-83 ended in disappointment. Before this loss, the Lightning had won 11 straight series.

At 58-21 as of this posting, the New York Yankees remain far and away the best team in baseball. They lead the AL East by 14 games (the Toronto Blue Jays are in second place). The Houston Astros are the second best MLB team at the moment with a 50-27 record, which puts them atop the AL West by 12.5. We read this week that the Yanks are on pace to win 118 games – which would be a new MLB record.

The pinstripes’ Aaron Judge maintains the MLB lead for most home runs of the season at 29.

In other AL news, CBS Sports notes that the Cleveland Guardians (39-36) are surprisingly hot, having won three of five in a series against Minnesota that cut the Twins’ lead in the AL Central to one game (it has since grown to three).

The New York Mets (48-30) have hit a bit of a rough patch, falling to second place in the NL this week, behind the LA Dodgers at 48-28. The Amazin’s are still at the top of the NL East, but the Atlanta Braves are surging and as of this posting are only 2.5 games out of first.

The MLB All-Star Game is less than three weeks away. This week, the league announced the leading vote-getters in the American League and National League, respectively. They are Yankees outfielder Aaron Judge and Braves outfielder Ronald Acuna Jr. With that achievement, the two are officially invited to play in the “Midsummer Classic,” which takes place July 19 in Los Angeles’ Dodger Stadium.

The New York Yankees’ outfielder Giancarlo Stanton and catcher Jose Trevino were named All-Star finalists. Shohei Ohtani, Mookie Betts and Vladimir Guerrero Jr. are also among the finalists for their positions in their respective leagues.

7. Kyrie opts to stay in Brooklyn – but KD wants out

Hours before NBA free agency officially began, Kevin Durant requested to be let out of his contract with the Brooklyn Nets. He’s said to be eyeing the Phoenix Suns and the Miami Heat.

The timing was curious, as just days earlier, his teammate Kyrie Irving opted into his $36.5 million player option and plans to stay with the Nets.

The conversation now is whether either player will remain with the team in the upcoming season. If KD gets traded, some speculate that the Nets will trade Irving, too. Lots of moves still to come here, in all likelihood.

8. Rudy Gobert is going to Minnesota

The NBA free agency period began this week, and it has been pretty eventful so far. Late Friday CBS Sports reported that the Utah Jazz are trading Rudy Gobert to the Minnesota Timberwolves in a six-player deal. Gobert is a three-time NBA Defensive Player of the Year – and the Timberwolves finished this past season in 13th place in defensive prowess. So this all makes sense. The pairing of Gobert and Karl-Anthony Towns – one of the NBA’s better offensive players – should be a big step up for the Wolves.

Meanwhile, the Jazz will enter the 2022-23 season with a completely new look, as the franchise overhauls its front office and its roster and sets the stage for a rebuild over the next couple of years. Head coach Quin Snyder is gone, and now rumors are swirling about the other big name still on their roster: Donovan Mitchell. He seems to want to play in a major market, and word is that the Knicks and the Heat would love to talk to him. Watch this space for further updates.

In other free agent moves this week, the Atlanta Hawks acquired All-Star guard Dejounte Murray from the San Antonio Spurs. CBS Sports notes that his impressive stats should marry well with new teammate Trae Young. Last season, Murray became the only player in NBA history to average 20-plus points, eight-plus rebounds, nine-plus assists and two-plus steals. He also had 13 triple-doubles — second to only MVP Nikola Jokic.

Back in Gotham, the New York Knicks have acquired former Dallas Mavericks guard Jalen Brunson in a four year, $104 million deal. Some have raised eyebrows at the 9-figure deal. Others point out that rightly or wrongly, the Knicks wanted him very badly. So badly, in fact, that they hired his father, Rick Brunson, as assistant coach shortly before the trade window opened.

Despite all the drama about who’s leaving, in fact most of the big stars of the past season are staying right where they are, with several players agreeing to significant contract extensions this week.

Even the biggest free agent on the market – All-Star guard Zach LaVine – is staying put with the Chicago Bulls after agreeing to a five-year, $215.2 million deal.

ESPN was the first to report that college football continues to undergo dramatic changes: USC and UCLA are planning to join the Big Ten as early as 2024. The move follows the dramatic shuffle less than a year ago, when Oklahoma and Texas announced their intentions to leave the Big 12 for the SEC.

implications for the NCAA

What does this mean? Well, this may be the death knell for the Pac-12. The ACC could follow. Wither the Big 12? Unclear. Under any scenario, though, the consensus seems to be that the NCAA will become increasingly toothless as a governing body. The SEC and Big Ten Commissioners will essentially hold all the cards when it comes to playoffs and other big policy matters.

So far, Notre Dame is holding firm on its independence from any league – but this might put some pressure on them to join one of the two mega-leagues.

implications for the players

Is this good for the players? Remember, the NCAA was created because the sport is so detrimental to player health that someone had to set academic, health and safety standards in a more objective manner. On the other hand, players will almost certainly be paid more – rule changes on using their likenesses and images have already opened the door to that. Sentiment aside, college football is a large and hugely profitable business – perhaps these moves will result in more of that bounty going to the kids who bear the risk of injury, and make it all possible.

That’s our take on the big sports news headlines and major events, and a preview of the week ahead, including what to know about football, tennis, baseball, hockey and more. Stay well and safe out there, dear reader. See you next week.