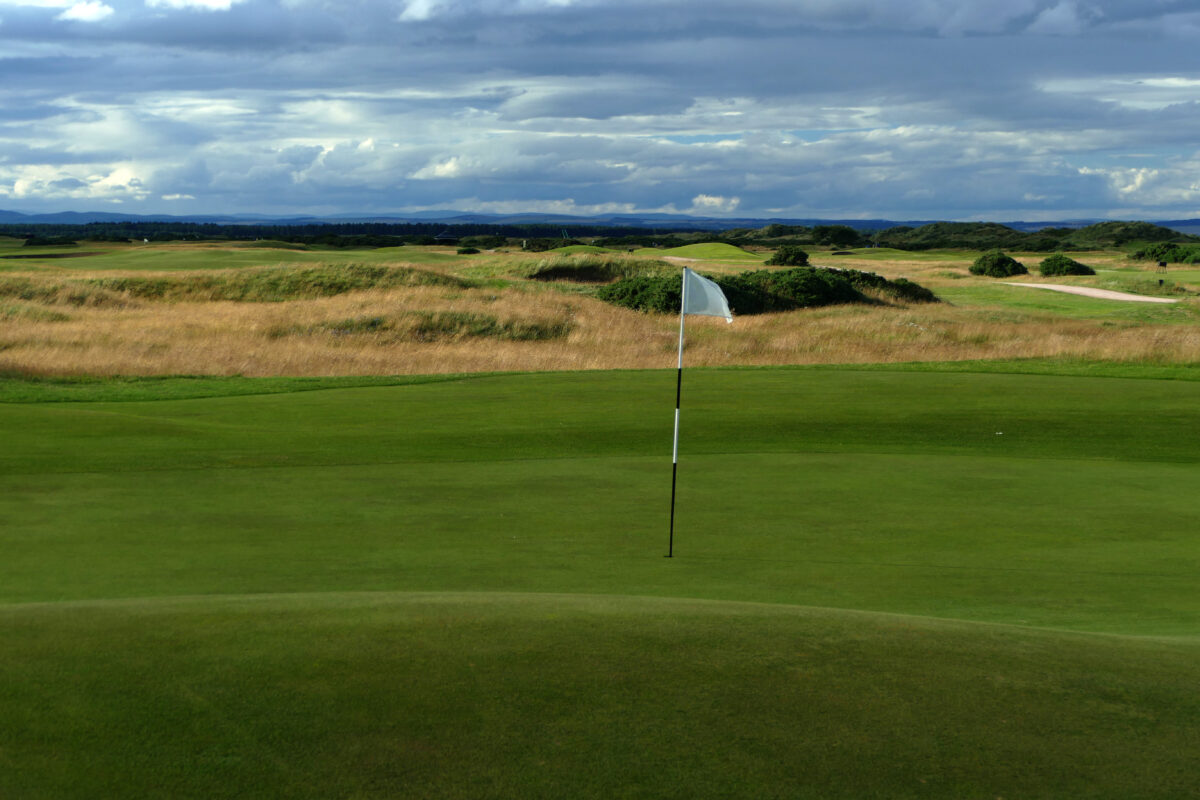 Here are 10 top headlines from the world of sports to know this Sunday.

1. Tiger Woods misses the cut at the British Open

The British Open Championship – the 150th edition of the world’s oldest significant golf tournament – is underway on the Old Course at St. Andrews in Scotland. Hopes were high this year as Tiger Woods stepped up to play, having won the iconic competition in 2000 and 2005.

For July 17, 2022, the weekly top 10 sports news headlines to know: the 150th edition of golf’s iconic Open Championship is on, and Tiger Woods failed to make the cut for the final rounds.

This year, however, Woods failed to make the cut. He was 6-over on Thursday and 3-over on Friday, leaving him 9-over for the tournament – far away from the cut line. Given his age and past injuries, this is likely to have been his last time playing professionally at St. Andrews. In a tearful exit, to the cheers of fans stacked 20 rows deep on the course, he acknowledged as much.

today is the final round at St. Andrews

Meanwhile, heading into round 4 this morning, the Open leaderboard has some familiar names. Rory McIlroy and Viktor Hovland are tied for first. Aussie Cameron Smith, American Cameron Young, Scottie Scheffler and Dustin Johnson are all in the hunt, too. If he wins, it will be McIlroy’s first major victory since 2016.

Turmoil continues as the start-up Saudi golf league, the LIV, writes huge paychecks as it competes for players with the PGA Tour. Reports are that LIV players – like Dustin Johnson – are feeling “persecuted” at the British Open. If you’re curious, perhaps catch the next LIV tournament. It’ll be held at the Trump National Golf Club in Bedminster, New Jersey on July 29th. Which kind of says it all, no?

2. Are NBA stars just too expensive to trade?

Despite being one of the top 3 players in the NBA, there don’t appear to be many suitors for Kevin Durant (KD), who wants out of Brooklyn. The Nets are likely negotiating for a high price tag for a trade. And some are starting to speculate that there won’t be a deal, and that KD will have to stay with the Nets (and Kyrie Irving) for the upcoming season.

Meanwhile, across town the New York Knicks are trying to acquire Donovan Mitchell from the Utah Jazz. But talks have slowed, since the Jazz are asking a sky-high price for Mitchell.

Sometimes, staying rather than switching teams turns out pretty well. For example, Deandre Ayton, a restricted free agent, this week signed a record 4-year, $133-million offer sheet from the Indiana Pacers. But the Phoenix Suns, Ayton’s original team, immediately matched the offer, keeping him on their roster. It’s nice to be in high demand . . .

lebron james has beef with Boston

In other NBA news, in a rollicking interview this week LeBron James said that he views Boston fans as “racist,” citing personal experience at the Garden. Kyrie Irving has made similar comments (although some would say Boston fans don’t like him ’cause he left the Celtics, not for any other reason). Klay Thompson confirmed that Boston fans can be raucous and profane – citing the hard-fought NBA Finals between the Celtics and the Warriors this year. We have no comment. Discuss amongst yourselves, if you like.

3. Djokovic wins Wimbledon – but what about the US Open?

A week ago, Novak Djokovic defeated Nick Kyrgios, 4-6, 6-3, 6-4, 7-6 (3), at Wimbledon. The unvaccinated player says he’s hoping to play at the US Open next month in New York – but as of now, the rules on vaccination status would bar him from participating.

Of course, Mayor Eric Adams made a special exception for Kyrie Irving, so he may do the same for Djokovic. Although, with infection rates rising, that might not be well-received by his constituents.

The New York Yankees (63-28) have had a tough week. Until last night, they had lost 5 of their last 6 games. Including losing 2 of 3 in a series against the lowly Cincinnati Reds. It’s only the 6th time in the past century that that a team with a less than 400 winning percentage has beaten a team with an over 700 percentage in a series. Yikes.

Adding salt to the wounds, the Yanks also lost the first game in a series with their arch-rivals the Boston Red Sox on Friday night, in a nail-biter that went into extra innings.

What’s going on here? Well, slugger Aaron Judge hit a dry patch, pitching was weak, and when games tightened up, the pinstripes couldn’t close. It doesn’t help that ace Luis Severino is out, and will be on the DL for two more weeks. Perhaps reflecting the frustration of players and fans, manager Aaron Boone was tossed for the 5th time this season on Friday night after arguing over questionable calls on balls and strikes.

Our Sports Desk deems this just a mild slump, suggesting that perhaps the team just needs a break – which the All-Star festivities this week will provide.  And the bottom line is that the Yanks still have the best record in MLB (but the LA  Dodgers are now only 3 games back – and the Houston Astros trail by just 4).

Interestingly, even after a tough week there’s almost no change in the pinstripes’ division dominance: as of this posting the Yankees lead the AL East by 13, with the Toronto Blue Jays in second place. And the pinstripes’ Aaron Judge maintains the MLB lead for most home runs of the season at 33.

The New York Mets (58-34) have recovered some momentum after a few speed bumps. They lead their division by 2.5, followed by the Atlanta Braves. But they remain in second place in the NL, behind the LA Dodgers (60-30).

Speaking of which, the MLB All-Star Game is this week –the Midsummer Classic is scheduled for Tuesday, July 19 at Dodger Stadium in LA.

Last Sunday’s All-Star Selection Show ended the suspense about who was invited to this year’s game. The starters had already been named, and the final tally saw some teams with a record number of players this year.

As we previously reported, Yankees outfielder Aaron Judge and Braves outfielder Ronald Acuna Jr. were the top vote-getters in their respective leagues. The starters for the AL include Yankees’ outfielder Giancarlo Stanton. The Houston Astros’ Jose Altuve. And the LA Angels’ Mike Trout and Shohei Ohtani. In the NL, the starters include the LA Dodgers’ Mookie Betts and the Padres’ Manny Machado.

While the New York Mets were snubbed in the starting lineup, Pete Alonso and Starling Marte made the final cut for the NL roster. Their cross-town rivals the Yankees ultimately have 6 players named to the All-Star team, 3 of them pitchers. With both Judge and Stanton on the roster, our Sports Desk notes this is only the third time in Yankee history that two outfielders have gone to the All-Start game in the same season.

7. the Home Run Derby is on tomorrow

Speaking of Pete Alonso, the Mets slugger will be trying to win the Home Run Derby for the third straight year tomorrow night in LA.

While the MLB leader in homers this season – the Yankees’ Aaron Judge – is sitting this one out -as is Toronto’s Vladimir Guerrero Jr. –  there’s still plenty of star power. Since this is likely to be his last season, St. Louis Cardinals’ Albert Pujols will participate. As the No. 8 seed, he faces No. 1 seed Kyle Schwarber of the Phillies. And Braves outfielder Ronald Acuna Jr. will try to avenge his 2019 loss to Alonso.

Our Sports Desk notes that while the New York Yankees are by far the leaders in home runs,  no Yankees will participate in this year’s Home Run Derby. We assume that’s ’cause they’re saving the fireworks for the actual game.

It’s a quiet time in the NFL, but of course there’s always something to report. This week, former Secretary of State Condoleezza Rice joined the new ownership group for the Denver Broncos. And Rob “Gronk” Gronkowski reiterated that he has no plans to return as active player.

And finally, there’s upset in Pittsburgh over a new name for the Steelers’ home stadium. For the past 20 years, the Steelers’ home in Pittsburgh was known as Heinz Field. But that changed this week. The new name is Acrisure Stadium. Huh? Acrisure is an insurance brokerage firm based in Michigan – and they have the naming rights for the next 15 years. So maybe get used to it, Steelers Nation . . .

This week, WNBA star Britney Griner pled guilty to marijuana possession in a Moscow courtroom, hoping to receive clemency and be released. If convicted, she faces a 10-year prison sentence. Russian players and coaches testified about how much she has done to help Russian women’s basketball. Former Cabinet Secretary Bill Richardson has been dispatched to Moscow to help negotiate her release. Keep her in your prayers.

10. New documentary about the Antetokounmpo family.

We’re ending on a positive note from the world of basketball. Rise is a moving and rousing new feature film about Giannis Antetokounmpo and his two brothers Charles and Alex, all three of whom are NBA players. If you loved King Richard, you have to catch this one (it has a 95% fresh rating on Rotten Tomatoes). The film – based on the true story – is about how the Antetokounmpos migrated from Nigeria to Greece – and how against all odds, the two parents of 5 managed to raise three sons who went on to careers in the NBA. It’s incredibly inspiring, and a much-needed dose of positive energy. Rise is streaming now on Disney+.

That’s our take on the big sports news headlines and major events, and a preview of the week ahead, including what to know about football, tennis, baseball and more. Stay well and safe out there, dear reader. See you next week.